SEVERAL MONTHS AGO I overheard several antique dealers discussing a brewery in Faribault. I lingered nearby, feigning interest in merchandise so I could eavesdrop. With tidbits of information filed in my memory, I meandered farther into the Peterson Art Furniture Company complex. 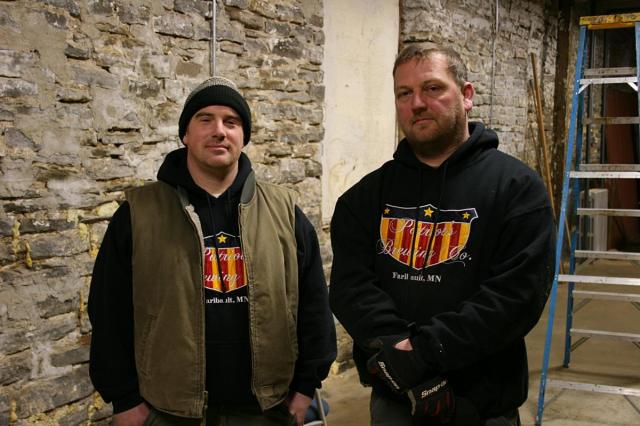 And thus I was introduced to Patriot’s Brewing Company, a Faribault-based regional brewery slated to open this fall, according to owners Noah Strouth, 40, and Chris Voegele, 41. Saturday morning I met with these longtime friends and 1990 Faribault High School graduates to learn more about their craft beer business. Up until then, I’d been asked not to publicly divulge news about the brewery. 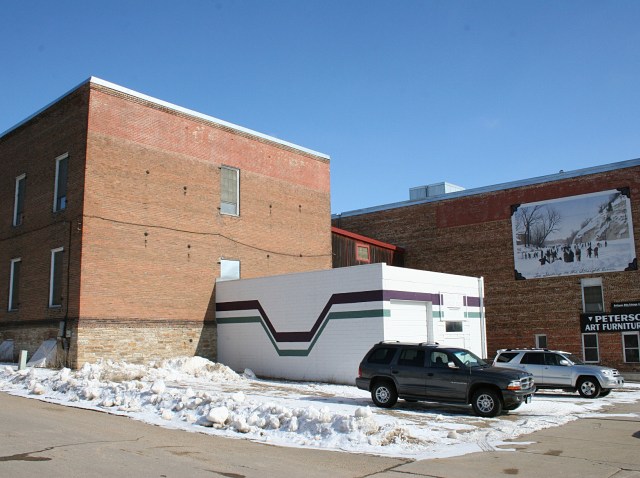 Photo by Audrey Kletscher Helbling
The brewery will be housed in the lower level of the brick building on the left with a tap room opening later in the small white building in the front of the Peterson Art Furniture complex.
Article continues after advertisement

But word had gotten around town and the time seemed right to share their plans for the brewery which will be housed in a 3,250 square foot basement section in the southwest corner of the former Peterson Art Furniture Company (before that home to the Faribault Furniture Company) building along Fourth Street in the heart of historic downtown Faribault. 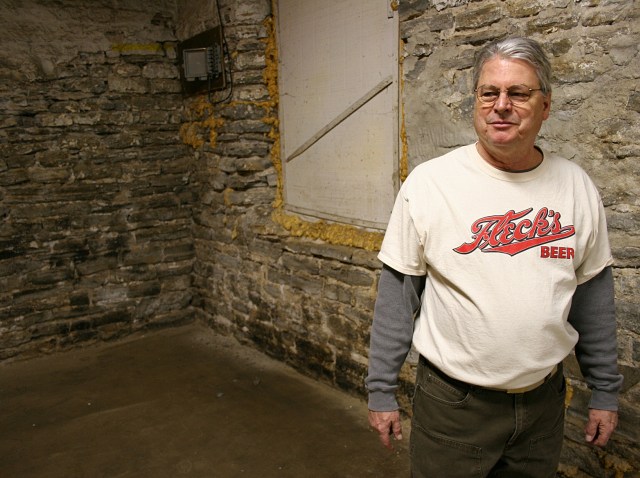 Photo by Audrey Kletscher Helbling
David Hvistendahl, from whom Patriot’s is renting space for the brewery, sports a Fleck’s beer t-shirt. Fleck’s branded clothing will soon be available for purchase through Patriot’s Brewing. Hvistendahl and a partner plan to eventually open an event center in the space above the brewery.

For the first time since 1964, when Fleckenstein Brewery closed, Faribault will have its own brewery, and one which will brew Fleck’s labeled bock and lagers. Patriot’s Brewing has trademarked the Fleck’s name, which had been left in the public domain, Voegele said.

“People in Faribault seem to like their history,” Voegele said, both he and Strouth emphasizing the name recognition and importance of Fleck’s beer in Faribault history.

They’ve even talked to locals who drank Fleck’s beer to learn more about the taste, something they hope to re-create in a Fleck’s lager. The recipes died with Ernst “Boots” Fleckenstein, the last brewmaster, Voegele said. The pair has also considered the historic grains and the water at the time (the brewery drew its water from an artesian well) the popular Faribault beer was produced. They’ll never exactly replicate Fleck’s, especially since they cannot re-create the yeast strain (of major importance in the brewing process), but they will try, the two say. 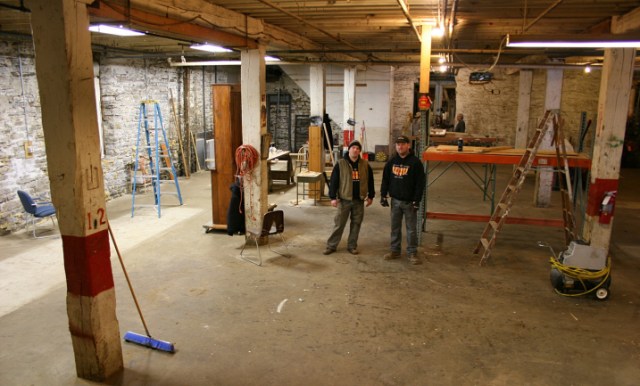 “Everything is in motion,” said Voegele as he and Strouth stood in the sprawling brewery space defined by rugged stone walls of local gray quarry stone and by thick support posts. The former storage area has been cleared and the two are working on the infrastructure with projects like tuckpointing and reinstalling the original windows in the 1886 building. Additional water and sewer lines are set for June installation during a street reconstruction project. 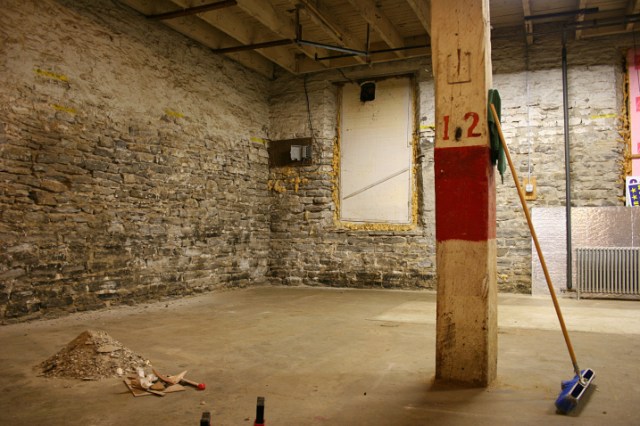 Photo by Audrey Kletscher Helbling
The walls, constructed from locally quarried stone, will be tuckpointed.

They hope to begin brewing in the fall, starting with 80-100 barrels a month, producing one or two beers initially in their 25-barrel brewhouse. Each barrel holds 31 gallons. A Fleck’s branded lager will be among their first beers.

Strouth and Voegele are no novices at beer brewing, For five years already they’ve brewed beer in a small scale mini brewery in the basement of Strouth’s rural Faribault home. They can produce about 16 gallons and will use the same operating system in the brewery, only on a much larger scale.

They are, they agree, passionate about brewing beer, bringing their home-brewed beers to taste testers at local beer clubs and to area craft beer competitions. In 2012, their beer earned four first place ribbons at the Rice County Fair.

“We make beer that we like to drink,” Strouth said. “And people seem to like our beer.”

“We have a high appreciation for fine beer,” Voegele said, admitting it took awhile, though, for his beer palate to develop. 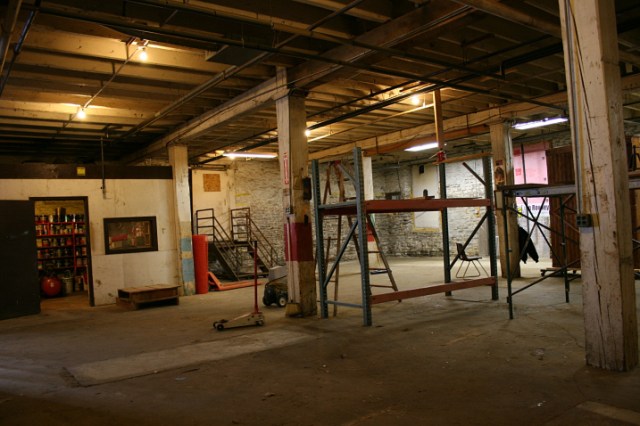 Photo by Audrey Kletscher Helbling
This view looks toward the steps leading to the future tap room. Only beer, and not food, will be served here.

While Patriot’s Brewing aims for regional distribution of its beer within a 60-mile radius of Faribault, the brewery is also relying on strong community support. As the business grows, plans call for opening of a tap room just up a set of steps from the brewery in a garage space occupied by Color My World. Voegele envisions a little bar with tables and chairs in an old style atmosphere in the cement-walled space. The pair plan to incorporate Fleckenstein Brewery/Fleck’s beer memorabilia into the tap room.

And then, as the business grows even more, the two hope to move the tap room elsewhere and use that vacated space for a grain room. 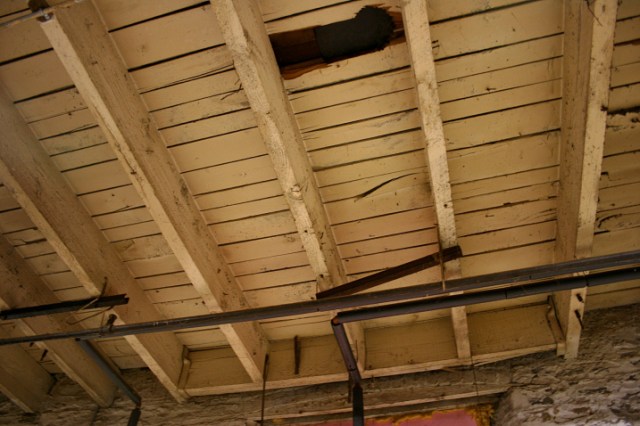 Photo by Audrey Kletscher Helbling
The ceiling of the historic building in the brewery area.
Article continues after advertisement

But that’s all in the future, after the brewery is established and sales are going strong. For now, Strouth and Voegele are concentrating on getting the brewery up and running while keeping their day jobs. Strouth works as a welder and fabricator at Lockerby Sheet Metal. Voegele teaches biology 105 at Minnesota State University, Mankato, works as an emergency medical technician in St. Peter and farms part-time in rural Morristown.

As they grow their regional brewery, they also plan to add employees. 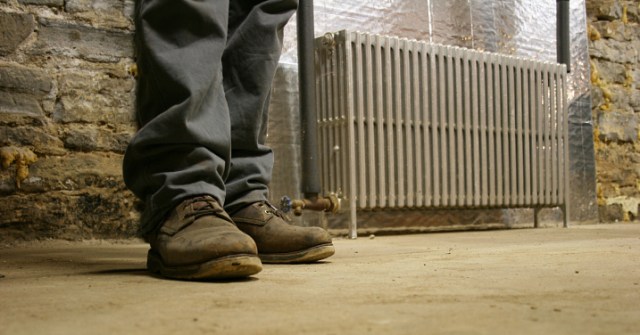 Photo by Audrey Kletscher Helbling
Chris Voegele and Noah Strouth are grounded in Faribault, their hometown.

They are committed to Faribault, to its rich history. “Our roots are in Faribault,” Voegele said.

They are also committed to using American made/grown products—from equipment to hops to bottles—whenever possible in their business.

That sense of American pride explains the company name—Patriot’s Brewing Company. “We believe in America…promoting American businesses, the feeling of Americanism, pride in country,” Voegele said.

And although Voegele did not specifically state it, he and Strouth are now living the American dream in starting their own business, Patriot’s Brewing Company.