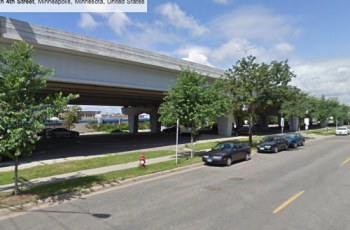 The world’s longest on-ramp, on the west edge of downtown Minneapolis.

We’ve been down this road before. Urban freeways impact their neighborhoods through noise, pollution, and by creating barriers to biking, walking, and local trips. No matter how many sound walls you erect, freeways erode quality of life for a quarter- or half-mile in any direction. Fumes, noise, asthma, speeding traffic… nobody wants to live next to a freeway. 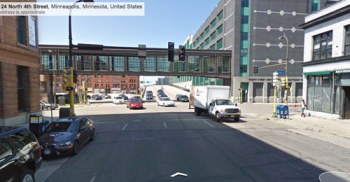 The 4th Street viaduct where it crashes into the downtown street grid.

Another big problem is what to do when the freeway ends. Anytime a high-speed road dead-ends into a low-speed street, we’re going to have problems. On-ramps are the most dangerous areas for anyone on foot or bicycle, because drivers’ perceptions have become acclimatized to fast roads. A good example is the (now-removed) Washington Avenue “freeway” that ran directly into the heart of the University of Minnesota campus, sending cars at 40+ mph into throngs of students. Very bad idea! Freeways are only as good as their network connections. Anytime you try to stop one, you undermine the whole point of a limited-access road in the first place.

Finally, and most paradoxically, freeways create their own demand. If you build a large new road, people will drive more. Take the road away, and people will drive less. Freeway removal projects in other cities have shown that much of the traffic simply disappears, some of it migrating to other roads or to other times of the day, some of it evaporating altogether.

Urban freeways are a mixed bag, to say the least, and we should take seriously the idea that we’d be better off without some of them. Here are my favorite three candidates for creative destruction.

History: This is a state highway, one of the first freeways built in the Twin Cities. You can tell, too. Hiawatha was designed before we knew how to properly build a limited-access road. For years it was a south-east shortcut from downtown to the airport. Ten years ago, we built an expensive LRT along it. Today it has a medicore bike path, wide sidewalks, and carries 20,000 cars each day through a key park, many neighborhoods, and into downtown.

Main Problem: Everybody hates this so-called freeway. Waiting at the lights along Hiawatha is an exercise in frustration. But the main problem is the way Hiawatha divides the neighborhoods on either side. Whether in car, on foot, or on a bicycle, crossing Hiawatha is lengthy, unsafe, and unpleasant. Many times, I’ve watched people dash across the 6-lanes of traffic, running across this quasi-freeway to or from the LRT stations. Devoting all the space around transit stations to a half-assed freeway is no way to capitalize on an expensive investment.

Magic Wand: Waving my magic wand, I’d turn Hiawatha into an everyday 3-lane road. I’d take the Western half of the right-of-way and develop the land. Some of it could be a linear park, some of it could be mixed-use urbanism. Crossing this street would become easy and comfortable. The neighborhoods on either side would re-connect. Streets like Lake, 38th, and 46th would be continuous again, and see large increases in foot-traffic. Quality of life in a large part of South Minneapolis would be improved.

History: This is a long- controversial railroad trench running through Saint Paul. For years it was a little-used shortcut from the South-East suburbs to the western half of the city. In 2002, Mayor Randy Kelly, weilding Saint Paul’s unchecked mayoral powers, connected this so-called freeway to Interstate 35-E over the objections of the City Council. Today it remains a political football, carrying 15-20K cars each day.

Main Problem: Because it’s below grade, Ayd Mill is less of a barrier for the neighborhoods. Rather, its main problem is the traffic it generates and redistributes through the city. The corner of Selby and Snelling is ground zero. Every day for hours, traffic pours off the “freeway” to take a shortcut to I-94, making this key corner highly unpleasant. You see similar effects along Hamline and Lexington.

Magic Wand: There are a lot of ideas for how to fix this road. Some want to cut the road in half, creating a two-lane version with a trail alonside similar to the river road. Others want to build an expensive connection on the North end to I-94, turning this into a more proper “freeway.” If I had a magic wand, I’d choose ‘none of the above.’ Instead, remove all the pavement from this trench and turn it into Saint Paul’s “midtown greenway.” Biking and walking paths, parks, community gardens, all set into a lovely valley. Instead of detracting from the neighborhood, this area would become an asset.

History: I-394 is the last proper freeway ever constructed in the Twin Cities (knocking on wood right now). When they built it, they included a viaduct to build two on-ramps running along 4th Street on the Western edge of downtown. At the time, most of the land around the extension was mix of LULUs: light industrial space, dilapidated buildings, vacant lots, the gargabe burner. Today, this land is prime space for development.

Main Problem: There are really two problems. First, having onramps lead directly onto city streets encourages cars to speed through what should be a walkable city. This is the spot where a man was killed earlier this year.

Worse than that, the 394 elevated causeway depresses everything in its shadow. The backside of the North Loop neighborhood is devalued by the road.

Magic Wand: Just take it down and replace it with a surface boulevard. All the land alongside the road would double in value. If you think the North Loop is amazing today, just imagine it without a freeway causeway hanging over it like a rusty guillotine. “HERC Burner Lofts” anyone?

Letting go is hard to do. When freeway teardowns have been tried in other cities, they’ve been surprisingly successful. All three of these so-called freeways were bad ideas. With a little bit of leadership and creativity, we could correct our mistakes.

Three Twin Cities freeways that no one would miss