MANKATO HAS LAUNCHED its newest form of public art—poetry posted on signs in parks and along recreational trails. 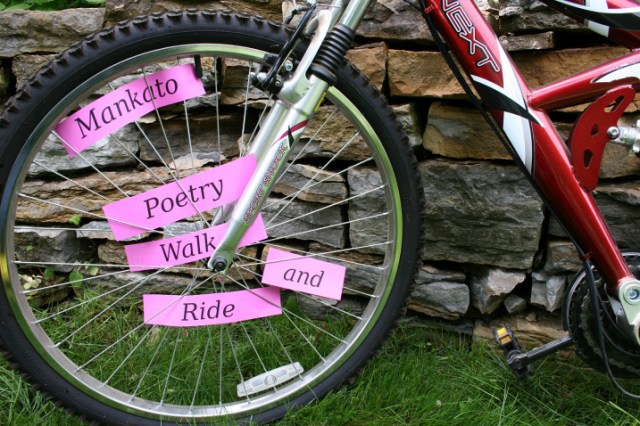 Photo by Audrey Kletscher Helbling
A scene I created to illustrate the poetry project.

The Mankato Poetry Walk and Ride is designed “to inspire and encourage poets of all ages, to provide public art in our communities and to encourage exercise,” says Yvonne Cariveau who suggested the project to the Southern Minnesota Poets Society of which she is a member.

Serving on the committee for the Mankato and North Mankato CityArt Walking Sculpture Tour, an exhibit of annual rotating outdoor sculptures, Cariveau envisioned a similar concept for poetry.

The Poets Society embraced the idea (member Susan Stevens Chambers organized a contest) and, with support from the cities of Mankato and North Mankato and numerous businesses, the project took off. 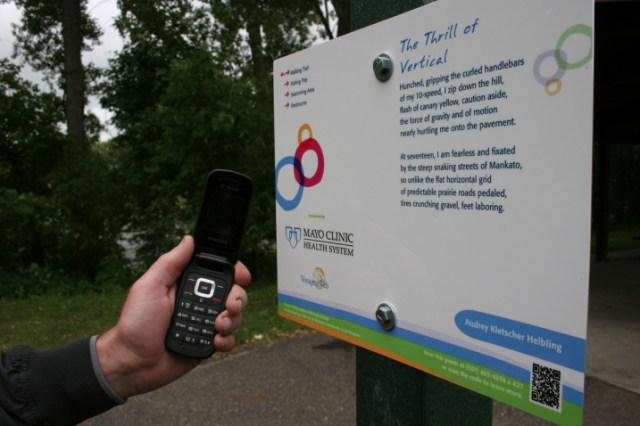 Photo by Audrey Kletscher Helbling
My husband and I listen to one of my selected poems, “The Thrill of Vertical.”

Today 34 poetry signs are up, mostly in Mankato, with a few in North Mankato, for reading and listening. Yes, listening. Poets recorded their poems, which can be accessed via phone, dialing (507) 403-4038 or scanning a QR code. 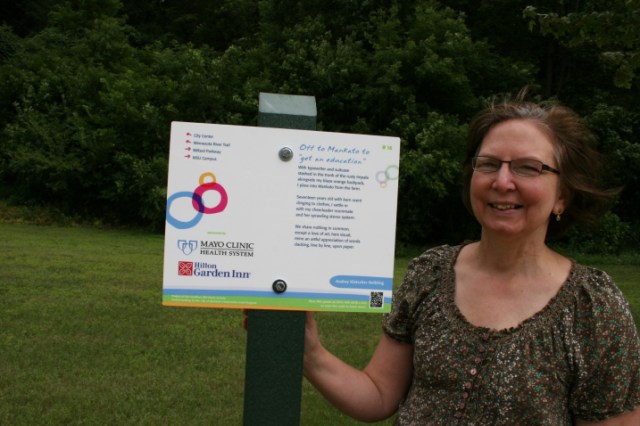 Photo by Audrey Kletscher Helbling
Me, next to my “Off to Mankato to ‘get an education’” poem posted near Glenwood Gardens.

Two of the 34 poems, 27 selected in a competitive process, are mine. 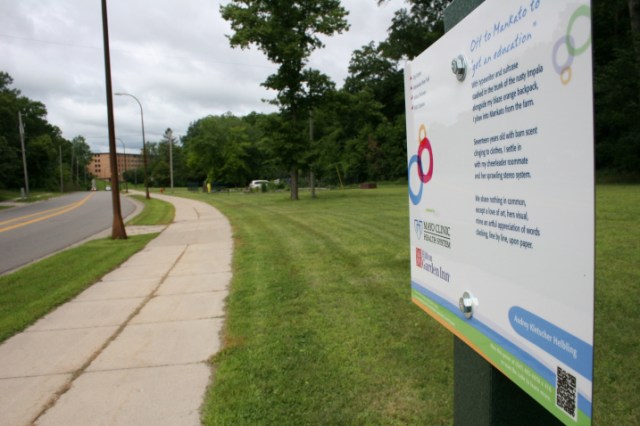 Photo by Audrey Kletscher Helbling
The setting in which one of my poems is posted near Glenwood Gardens.

You’ll find “Off to Mankato to ‘get an education’” near Glenwood Gardens close to the intersection of Glenwood Avenue and Division Street. The poem was inspired by my arrival in the autumn of 1974 as a freshman at Bethany Lutheran College, located not all that far from the posted poem. 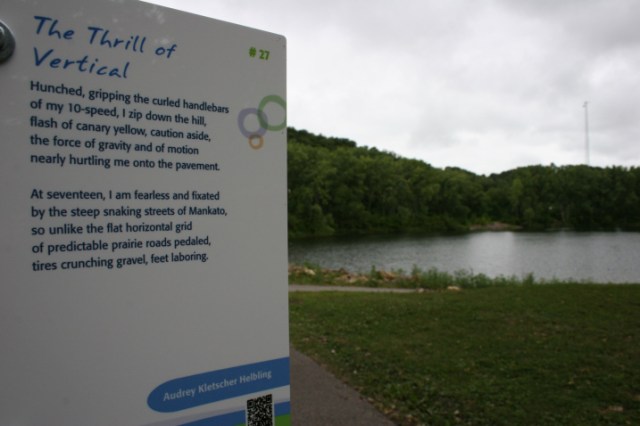 Photo by Audrey Kletscher Helbling
“The Thrill of Vertical,” next to Hiniker Pond.

My second poem, placed at Hiniker Pond Park in what seems like North Mankato but is really Mankato, also was prompted by my college year experiences. In “The Thrill of Vertical,” I write about zipping down the curving and hilly streets of Mankato on my 10-speed bike. Interestingly, the street I remembered in writing this poem is where “Off to Mankato to ‘get an education’” is posted along a recreational trail. Back in the 70s, there was no such trail.

Reflecting on that hurtling ride, I can’t help but think how stupid I was to fly at such speeds, back hunched, hands gripping racing handlebars, no helmet and two narrow bicycle wheels separating me from unforgiving pavement.

Today that crazy college kid abandon is forever captured in words, now published for all to see and recorded for all to hear. Until next June, when the 2013 poetry signs will come down and new ones will be erected.

Likewise, the other published writers—all of whom had to live within a 50-mile radius of Mankato, who range in age from seven to over 70 and are anywhere from new poets to recognized published poets—wrote about topics such as Mankato history, the river, Fudgsicles, family, mentors and more.

The challenge in writing the poems, for me anyway, came in the restrictions of 40 characters or less per line in a poem limited to 18 lines. It is a good exercise for any poet, to write within such confines, to value every letter, every space, every word.

One hundred twenty poems, submitted in specified age categories for those in third to 12th grades and then in adult divisions of humorous and serious, were anonymously judged. Doris Stengel, past president of the National Federation of State Poetry Societies, considered the adult entries while Peter Stein, League of Minnesota Poets youth chairperson, judged the youth poems. It is always rewarding as a poet to know that your work was selected on the basis of merit and quality rather than by name recognition. 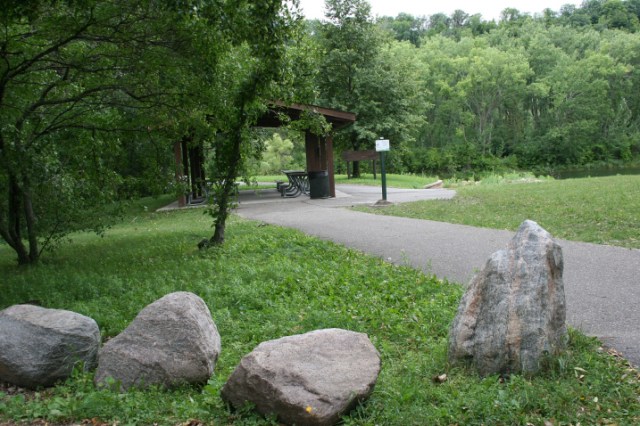 Photo by Audrey Kletscher Helbling
The poems are posted in locations like this, along a trail near the shelter house in Hiniker Pond Park. The unobtrusive signs are about the size of a standard sheet of paper.

In addition to the 27 winning poems, seven poems from notable Mankato area poets are among those posted.

Reaction to the poems thus far has been enthusiastic, says project initiator Cariveau, herself a poet. Her humorous poem, “Dreams of Coldstone,” was among those selected.

“People,” says Cariveau, “love the poems and are surprised by them.”

As for my reaction, I appreciate a project that makes poetry accessible. Those who may not otherwise read poetry likely will in an outdoor setting. Short poems. Easily read or heard. Non-intimidating. This is public word art at its best.

FYI: To read a list of the winning poets and the titles of their poems, click here.

For a map showing the locations of the posted poems, click here.

To learn about the Southern Minnesota Poets Society, click here.

Information on the 2014 Mankato Poetry Walk and Ride contest will be posted early next year on the SMPS website.

A chapbook of this year’s poems will also be published and will be available for purchase via the SMPS website and perhaps at other locations in Mankato.

P.S. I did not showcase other poems here in photos because I was unaware of their locations when I was in Mankato to photograph mine.