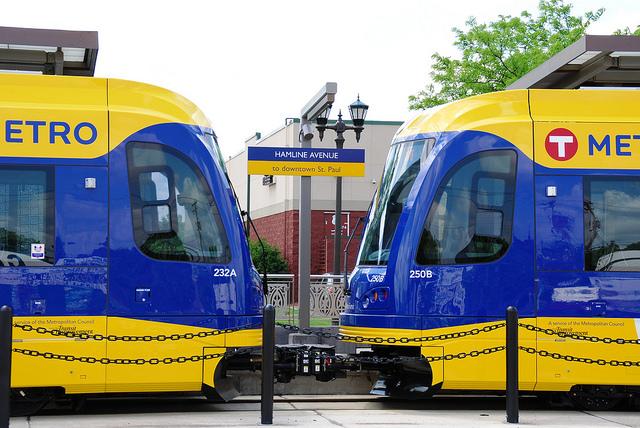 Courtesy of Metro Transit/Drew Kerr
LRT travel allows for time-saving multi-tasking that is simply not available when I’m driving my car.

I’m not an unquestioning LRT lackey.  Some questions about LRT strike me as very fair.

For instance, could we have a better overall transit system if we invested the same amount of public money – billions of dollars — in buses, vans, taxis and bus rapid transit instead of trains? Given how sprawled our metro area has become, would an expanded web of bus routes be a better way to serve the region’s far flung citizens than a few mega-expensive fixed rail transit lines?

Those are fair questions that I think the ardent trainophiles are too quick to dismiss.  And just because I ask them doesn’t make me a shallow-thinking Joe Soucheray parrot.

But other questions about LRT strike me as completely unfair. For instance, some are now asserting that LRT is clearly inferior to cars on the grounds that LRT travel wastes more time. The Star Tribune fueled some of these claims when it conducted an interesting “Amazing Race” feature that tested the amount of time it took various modes to travel the length of the Green Line route. The Star Tribune’s Amazing Race feature found that:

Interesting, but is a car ride really saving more time than train ride?

A car may get me from downtown-to-downtown faster than the train. But on days when I have reading, talking and writing that need to be done as soon as possible, which is pretty much every work day, I can’t safely accomplish those things while driving a car.  But I can accomplish those things while riding the train. Therefore, LRT travel allows for time-saving multi-tasking that is simply not available when I’m driving my car.

Of course, time saving is just one factor travelers and leaders have to weigh. The LRT has  advantages associated with the environment, encouraging development density, and reducing parking costs. Cars have enormous advantages in terms of route flexibility, which is a very big deal to people with unpredictable work and professional lives, and those who live far from our two LRT lines.

But when it comes to saving time, the LRT is the real winner of the Amazing Race, at least for those who live close to the two LRT lines.