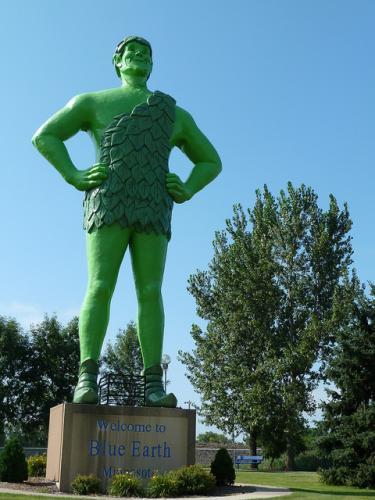 Did you know that Minnesota is home to The Jolly Green Giant? When I started researching this, I hadn’t realized that there was a 55-foot tall fiberglass statue in Blue Earth, MN. I was aware of the enormous wooden sign of the Giant (with Sprout!) on Route 169 near Le Sueur, however. The few times we drove by when I was a kid, I remember waving at the sign enthusiastically and being amazed by its size. Imagine my disappointment to read on Wikipedia that this statue is a source of minor controversy because it “frequently startles motorists.” I’m going to let you in on a little secret. He’s not a real giant, people.

In 1928, when the Green Giant made his ad debut, he scared people then too. He was originally created wearing a scruffy bearskin and according to Ad Age, “looked more like the Incredible Hulk than the grand old gardener that he is today.” Personally, I never thought of him as a gardener. He was just a quiet giant wearing a dress of leaves, smiling happily while watching people enjoy his veggies. But I digress, he needed a makeover after his debut. That was handled by a young Leo Burnett who was then with ad agency Erwin, Wasey & Co.

Leo Burnett was an advertising executive known for being heavily involved in the Creative Revolution in the 1960s. At a time when ads were dominated by heavy copy, Burnett developed simple icons that came to symbolize product benefits for consumers. Burnett was on Time Magazine’s list of the 100 most influential people of the 20th century. In 1935, he founded the Leo Burnett Company in Chicago, Illinois, and it became the 10th largest advertising agency in the world.

Burnett used his magic to give The Green Giant a makeover. Not only was his bearskin replaced with the dress, er, tunic of leaves, but his posture was improved and his scowl was replaced with the smile we see today. A valley of crops was added to his background and brilliantly, Burnett added “Jolly” to the Green Giant’s moniker. He became a household name by the 50s, which lead the Minnesota Valley company to change their name to Green Giant Co.

More problems arose when television came into play, however. Our Jolly Green Giant was scaring people again as they tried painting men green, using puppet figures, etc, to bring him to life. Again, he’s not a real giant, people. But the ingenious solution was reached to show just enough of the Giant so people would see he was there and limit his movements. That was also when Bob Noel, a writer at The Leo Burnett Company, came up with the signature “Ho, ho, ho” and “Good things from the garden” song.

Now, that brings us back to Blue Earth, MN, where the town paid $43,000 in 1978 to build a 55-foot statue of the Giant. This was the vision of Paul Hedberg who owned the local radio station KBEW. Hedberg interviewed travelers going through Blue Earth for his radio program “Welcome Travelers.” At the end of each interview, Hedberg gave guests samples of Green Giant veggies which had been canned at a local plant. Interviewees kept telling him they wanted to see the Green Giant. Hedberg was granted permission from the president of Green Giant and had the funds locally raised within a week ($50,000!).

Erected in 1979, the statue is mounted on an 8-foot tall base. His feet are six-feet long (that’s the equivalent of size 78 shoes!). A lack of funds put later plans on hold to add an audio feature that would have boomed “HO HO HO!” in addition to a playground and swing featuring Sprout.

All of these years later, Hedberg’s radio show is retired and the canning plant is no longer owned by Green Giant, but now that I know he’s there, I see a visit to Blue Earth in my near future.

How Minnesota got its green giant