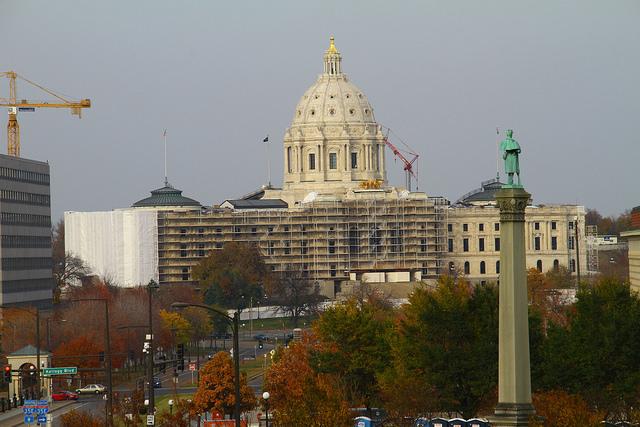 CC/Flickr/DrMartinus
The Capitol renovation is a great chance to try a new idea for fostering an effective legislature.

This week state leaders are discussing office space arrangements in a new legislative office building and a soon-to-be renovated State Capitol building. So maybe now is the time to desegregate their longstanding partisan ghettos.

In a recent interview, I asked Duane Benson, a former Senate Minority Leader (R-Lanesboro), how to reduce partisan polarization in the Legislature. One suggestion the legislative veteran made was to stop segregating legislative office space according to party affiliation:

It sounds simplistic, but I think it would help a lot if legislators had their offices together, so that every other office was a different political party. They’d come out and talk to each other. In the House it’s a floor separating them.

The whole place is run on communications, but I guarantee I can go over there and find people who haven’t met all their colleagues yet. I think officing near each other is a kind of a simple fundamental thing that could happen to help people get to know each other. Then I think you start to respect each other…

Policymakers in both major parties agree that it is destructive when citizens are institutionally segregated based on race or ethnicity. They have seen that such ghettoization causes people to dehumanize, misunderstand and discriminate, which erodes the health of our communities and democracy. No contemporary Minnesota politician publicly advocates for mandatory segregation.

But when it comes to Legislative office space, segregation has long been accepted with no questions asked. Republicans get this partisan ghetto. DFLers get that partisan ghetto. They argue over the respective size of the ghetto, but there is bipartisan agreement about the need to segregate.

Would having Democrats and Republicans in every other office automatically lead to a grand new era of bipartisan peace, love and understanding? Nope. But it would almost certainly lead to more hallway conversations: “What are you doing this weekend?” “How’s your family?” “Can we borrow a chair for an hour?” “Cold enough for ya?  “How about them Twins?”

Partisan desegregation of state legislative office buildings is no panacea. It may even be a total waste of time. But there really is no reason to not give it a try, unless fostering partisan polarization is the intent.