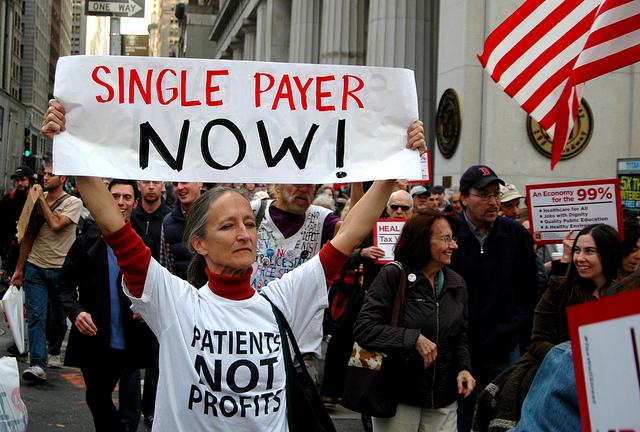 CC/Flickr/Michael Fleshman
Am amazing 71% of Americans support having the option of having the government takeover their health care, including 63% of Republican respondents.

On the heels of the closing of the second year of open enrollment for Obamacare coverage, expect to hear a lot of “government takeover of health care” ranting from conservatives.

That phrase is heavily used by anti-Obamacare zealots, and that is no accident.  In 2009, Republican political consultant and celebrated wordsmith Frank Luntz advised his conservative clients to portray the proposed Affordable Care Act, also known as Obamacare, as “a government takeover of health care.”

Conservatives did as they were told. If you Google those words, you’ll see that the usage of that phrase, and close variations, has been widespread among conservatives ever since.

In a 28-page strategy memo, Luntz explained why stressing a Washington “takeover” was so important:

“Takeovers are like coups.  They both lead to dictators and a loss of freedom.”

False.  I’m not going to go into detail about why it is false, because it’s pretty self-evident.  But suffice it to say that ‘government takeover of health care” as a descriptor for the Affordable Care Act was named by the non-partisan editors of Politifact as their 2010 “Lie of the Year.”   In a lie-intensive election year, “government takeover of healthcare” was named by both editors and readers as the Pants on Fire of all Pants’s on Fire.  Politifact notes the obvious:

“It is inaccurate to call the plan a government takeover because it relies largely on the existing system of health coverage provided by employers.

It’s true that the law does significantly increase government regulation of health insurers. But it is, at its heart, a system that relies on private companies and the free market.”

Not Scary.  But beyond being false, the more surprising thing to me is that “government takeover of health care” is not all that scary to a  majority of Americans.

A January 2015 GBA Strategiessurvey asked Americans if they support enactment of “a national health plan in which all Americans would get their insurance through an expanded, universal form of Medicare.” By a 15-point margin, a majority of Americans (51% support, 36% oppose) supported that kind of government takeover of health care.

The same survey then asked Americans about giving people the option of having government take over their health care.   Specifically, the survey asked if respondents would support giving “all Americans the choice of buying health insurance through Medicare or private insurers, which would provide competition for insurance companies and more options for consumers.” Am amazing 71% of Americans support having the option of having the government takeover their health care, including 63% of Republican respondents.

So it turns out that, after six years of intensive Luntz-led vilification of “government takeover of health care,” backed by hundreds of millions of dollars of political advertising and public relations efforts, there are very few issues in America today with as much public support as there is for the federal government taking over American health care.