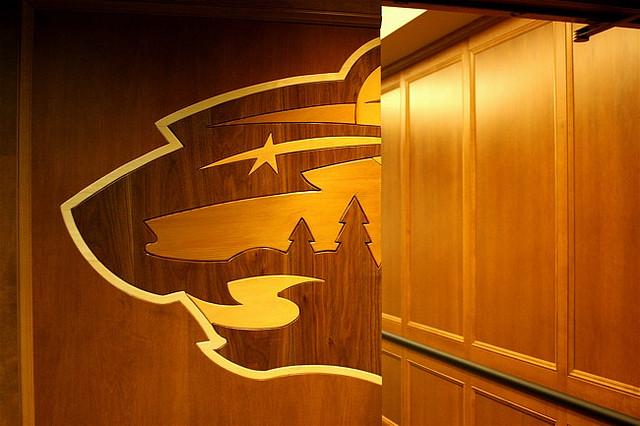 CC/Flickr/Bugsy
Any team that forces me to awkwardly exclaim “The Wild are, um is, um are, um is, going to kick your ass” in a moment of passion is not worthy of my face paint.

It’s not that I’m opposed to fans jumping on bandwagons. I not only am tolerant of bandwagon fans, I highly recommend the practice. Supporting chronically losing teams is something with which I have a lot of experience, and I can attest that it is not at all good for your mental health.

Still, I’ve decided I can’t jump on the Wild bandwagon. As inspiring as their dramatic comeback in the second half of this season has been, I can’t make myself into a bandwagon hockey fan, even when the hometown boys are the hottest team in the National Hockey League (NHL).

This realization caused me to do some reflection. These are the five reasons why I decided that I can’t get on the Wild bandwagon.

#5. The grammar is too awkward. I don’t have a lot of hard-and-fast rules in my life, but I do have this one. Sports teams must be named after nouns, preferably critters or violent human beings. They should never be named after adjectives. They also must be plural, not singular, because the team name is referring to a group of people. In my book, any team that forces me to awkwardly exclaim “The Wild are, um is, um are, um is, going to kick your ass” in a moment of passion is not worthy of my face paint.

#4. Toddler fans screaming for entrails during fights. Fist fights happen in other sports, but in other sports they are greeted with immediate league expulsion, stern sportscaster condemnation and the vast majority of fans sadly shaking their heads. But in hockey, bloody fist fights are greeted with bored referees picking up teeth instead of breaking up the fight, and fans of all ages enthusiastically jumping to their feet to cheer for maximum bloodshed. Though starting a fight results in penalty box time that would seem to weaken your team’s chance of winning, it is still universally celebrated in hockey culture as being savvy and heroic. It’s not that I’m too pure for violent sports — football is my favorite — but even I have my limits.

#3. Overregulated anarchy. For a sport that celebrates lawlessness and fighting like none other, there sure are a lot of confusing penalties in hockey. Some of them are pretty self-explanatory. “Elbowing,” “Eye gouging,” “Kicking”, “Headbutting,” and “Spearing” are pretty clear to me, though I still am baffled about when each qualifies as a minor penalty, major penalty, misconduct penalty, game misconduct penalty, match penalty, gross misconduct penalty, stacked penalty, and penalty shot. But I do know one thing for sure: I will understand the theory of relativity, how to cure cancer, the solution to the Israeli-Palestinian dispute and the meaning of life before I will understand “Icing.”

#2. The focal point of the game is invisible. Even when I had much younger eyes, I couldn’t begin to follow the puck when watching hockey on TV. When you can’t see the puck, all there is to see are a mass of bodies chaotically gliding and colliding until punches are thrown or horns are sounded and celebrations ensue. I’m sorry, but a sport in which the focal point of the game is invisible to fans lacks a minimum requirement to be considered a spectator sport. Until they bring back the FoxTrax glow puck, I’m not going to stare at the screen for three hours pretending that I have a clue about what is happening.

#1. Not their turn yet. The final reason I can’t get on the Wild bandwagon is this: As a long-suffering Vikings, Timberwolves, Twins and Gophers fan, I have to say that the Wild has or have (see what I mean) not suffered nearly long enough to have earned the right to succeed. In Minnesota, it is considered impolite to win championships after a mere 18 years as a franchise. The Twins waited 26 years. The especially snakebit Vikings have been in the hunt for over a half century. So it wouldn’t be fair for me to cheer for the Wilders so early in their fans’ misery cycle.