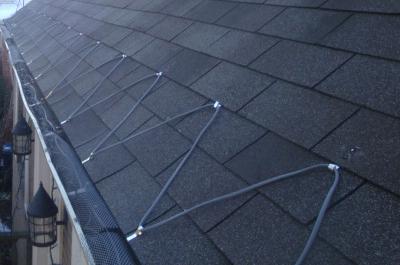 Heat cable, heat tape, heat wire…they’re different names that mean the same thing. They’re hot wires that run up and down your roof to melt snow and prevent ice buildup on your overhangs and in your valleys.

Heat cable has its place in the world (more on that in a minute), but I usually don’t recommend it to my customers, for a few reasons:

Heat cable doesn’t fix the root cause of the problem: too much snow on a roof that’s overheated because warm air is leaking into your attic.

90% of the time that problem is fixable, and it all starts with a quality home energy audit from someone who understands insulation, ventilation, and ice dams. You’ll probably be urged to seal up spaces where warm air is sneaking into your attic – like around light fixtures, outlets, etc. These areas that allow air-leaks into your attic are called “attic bypasses.” Your energy auditor may also tell you to double down on your insulation, or to improve your ventilation, or both

Even very good heat cable may add about 20% to your energy bill – all depending on how often you power it on. That’s no better on your wallet than it is on the environment. (If I’m going to incur the wrath of Al Gore, at least I’d want it to be because I’ve got the showiest Christmas lights in the neighborhood.)

Some homeowners forget to turn off the heat cable. They accidentally keep it powered on throughout the warmer months, wasting more energy and money. This also wears out your heat cable much faster. Most heat cable doesn’t even last long to begin with; the average life of heat cable seems to be around 3-5 years. Again…this depends on a number of factors.

(Side note: Apparently they now make a type of heat cable that turns on and off automatically. But I don’t trust most technologies that just came out of the laboratory, and even if the heat cable shuts off in the spring it still poses problems in the winter.)

Heat Cable Problem #3: It melts snow that can just refreeze.

Anything that melts snow on your roof can cause an ice dam. The cables will create lots of zig-zagging channels of melted snow across your roof. Where does that melted snow go? Well, it’ssupposed to roll down the slope of your roof and end up on the ground. But in many cases it ends up refreezing along the edge of your overhangs, or refreezing just above the heat cable. How do I know this? Because not only did we install heat cables many years ago, but also every year we’d remove dozens of ice dams on homes with heat cable installed.

Heat Cable Problem #4: The warranty is a joke in most cases.

Sometimes heat cable installers will try to sell you on heat cable by telling you there’s a “great warranty!” What they don’t tell you is that warranty typically pertains to parts only, and that the parts (the cable and tape) are dirt-cheap. The labor makes up most of the installation cost. Look for a parts-and-labor warranty. There’s a good chance you’re not going to find it, because heat cable inherently doesn’t last long, especially with heavy use.

If you do find a parts-and-labor warranty, make sure it’s being offered by a company that’s been around longer than your favorite pair of socks.

Last but not least, ask the installer what happens if the heat cable does not work and you still end up with ice dams. (Their answer may just prove my point.)

Even if a heat cable functioned perfectly, it’s still ugly. You might as well wear Crocs while you’re at it.

Why do people take down their Christmas lights each year? Because your home looks sad and disheveled if you’ve a bunch of unused wires hanging all over it.

But unlike Christmas lights, heat cable is not something you’ll remove and reinstall each year. It’s semi-permanent. It will be on the prominent parts of your roof – your overhangs valleys – staring you in the face 365 days a year.

We know what a pain heat cable is. We used to install it.

Homeowners asked us about heat cable all the time, in the early days. Everyone wanted what seemed like a quick, easy, cheap solution to the ice dam problem.

But we had to stop. We just had too many problems with heat cable – the ones I’ve told you about. I don’t like offering any service that doesn’t provide high value for the money, and although it was a very profitable business we got out of it altogether.

As an ice dam removal pro, I’m in the business of helping my customer solve problems, and in many cases heat cable was creating problems.

When is heat cable appropriate?

If you were reading pretty closely you might have noticed I said “I rarely recommend heat cable.” Believe it or not, sometimes it’s the only option, and it can be effective.

Some homes have design flaws, and sometimes the cost to correct the design flaw is just too high. Some houses are ice-dam magnets, and nothing will keep the ice dams away. In that case, heat cable can help you keep trouble spots clear of snow and ice.

But you probably don’t live in that house. You should only try heat cable as a last resort. This means you’ve done the energy audit, you’ve had the insulation guys out, you’ve had your ventilation checked, you’ve sealed up any air leaks into your attic, and you’re raking your roof whenever the snow starts to pile up. A cool and clean roof is the best way to prevent ice dams.

On the off-chance you’re still getting ice dams after all that, then yes, maybe you should have heat cable professionally installed on those trouble spots. Just know that it’s a last resort, and still doesn’t always do the trick.

We remove more ice dams per year than probably any other company on the planet. Many of those ice dams are on homes with heat cables. I can’t in good faith suggest you install heat cables on your roof, unless you’ve tried every other prevention measure first (which will probably work).