Any Twin Cities theater- or concert-goer who peers at the program is likely to know the name Margaret Wurtele. She has served on several major arts boards and fund-raising efforts, and managed a charitable foundation. She and her husband, Angus, have been notable benefactors; they underwrote last fall’s Minnesota Opera production of “Silent Night,” for example. And Guthrie attendees have all learned to turn left off the escalator for the Wurtele Thrust Stage, named in their honor.

Readers of memoirs have also known that Margaret Wurtele is the author of two books of nonfiction, “Taking Root: a Spiritual Memoir” and “Touching the Edge: A Mother’s Path from Loss to Life,” which dealt with the death of her son, Phil, who was killed at age 22 while attempting to rescue a climber on Mount Rainier.

But now she has moved into new literary territory. On Tuesday, New American Library released her first novel, “The Golden Hour,” and tonight she’ll begin a round of readings – the first one at the Loft in Minneapolis.

Set in the vineyards of Tuscany during World War II, the novel is both a coming-of-age story and the depiction of a village’s (and family’s) divergent and sometimes shifting responses to the Nazi occupation. It’s also a love story, rooted in the resistance and fueled by danger.

To learn more, MinnPost caught up with the author for a conversation about the book. It was during a visit to Italy a few years ago, Wurtele said, that she heard stories about the experiences of her host’s family during and after the war. And while there, the Tuscan hills and vineyards reminded her of the land and winery, Terra Valentine, that she and her husband own in California, where they spend part of each year. Here are excerpts of the interview.

MinnPost: You’ve been a key leader in arts circles for many years — as a patron, a foundation manager, a development person; you’ve also written memoirs. But a novel — now, at a time in your life when you might be thinking, ‘Well, we have this winery, I’m busy on boards, maybe we could begin to slow down a little …’ Why a novel — how did that come about?

Margaret Wurtele: I didn’t set out to write a novel, actually. I had written the two memoirs, which were both compelling at the time for what was going on in my life. I never thought of myself as a writer. I’d always kept journals — then I went back to Hamline in my 40s and took a master’s in liberal studies. I took a lot of writing classes, and I found that I loved writing. And so then, when I started going through … first of all, having grown up with my parents in a completely secular environment, then deciding I wanted a spiritual life — that was my thesis at Hamline. My professor said, “When you’re out of here I want to make this a book.” I had asked him if I could do a series of journal entries — so that became the first book. Then when Phil was killed, it seemed like this was the logical way for me to deal with it — you know, about a year, two years later. I had three journals full of my raw reactions to it all, just because that’s the way I deal. … And I thought, you know, I’m going to reflect now — to make it into more of a story. But my writing had been my way of coping. I had written a couple of short stories for fun — they’ve never seen the light of day. … 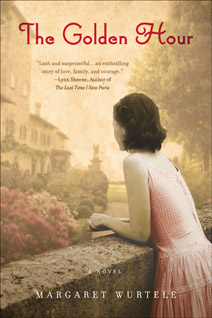 So then we were on a trip to Italy, and to this day I don’t really understand what made it so compelling for me. But we were invited to have lunch at an estate where our friends got their olive trees for Sonoma. This guy was really nice … and at the end of the lunch he started reminiscing. There we were at this villa — his mom grew up there. During the last year of the war they were forced to live in small rooms at the back. After the war she fell in love with the translator for the Allied troops that had liberated them. But her father didn’t want her to marry him because he was Jewish. I remember just thinking — the irony of that, the outrage — after all the Nazis had done to them, for him to just play their game. … I came out of there burning to fictionalize this.

I had to learn about fiction. … I took a class at the Loft; I got somebody to help me with the first few chapters. She kept saying, “No, no, no, no, no. This is narration; you’ve done that before. Fiction is scene and dialogue. You can’t tell the story; you need to show the story.” Finally, after about five chapters of writing each one over and over again, I said good-bye. …

MP: The depiction of place in “The Golden Hour” is very striking. Did you go back and spend more time in Italy?

MW: I did not go back there. In fact, I forbade myself to go back. Because I had such a clear sense of it — in terms of the fictional town, the arrangements of the villas and so forth. But there were several books that were so helpful to me. One of them was actually written in the ’50s, and it was called “A Farm in Chianti.” It wasn’t in that part of Tuscany, but it was about the agricultural year. That was helpful. But the main thing is — and at my reading I’ll show some slides — it’s so much like our environment in Napa, the whole thing of the vineyards, the olive trees, the agricultural rhythm of it all. It’s so much a part of our life there that that was probably why the sense of place comes through — they’re so much alike.

MP: I was intrigued by the different responses the various characters had to the fascists, to the Germans — and how it was so difficult to ascertain whether someone could be trusted. Did you have more to go on about the way people responded to the Germans during the war? About the resistance?

MW: Several things. There was a book called “The Italians and the Holocaust” by Susan Zuccotti. She talked in there about how so many of the Jewish businessmen initially were part of the fascist party — they were nationalists first. I guess the Jews were so much more integrated into Italian society than in France or some other countries. So they were just blind to what was happening. Some of the racial laws came into play in the late ’30s, but until then many thought, “We’re going to be fine. … He [Mussolini] is just doing this to get along with Hitler. He knows we fought for national unification, and he’s grateful to us.”

The father character [in the book] kept switching allegiance. You could kind of see that; they were afraid [the Nazis] were going to win, and then . … You wonder, “What would I be?” It was a very complex area; I had no idea what I would be getting into.

MP: “The Golden Hour” was a maturation story, a love story, a family-dynamic story …

MW: Yes, kind of a family reconciliation story in the end. But I think that was what kept me going — in terms of sticking with this project. Because I became so fascinated with the history — trying to imagine my way into it.

MW: I really didn’t think about it in advance. … She just kind of was who she was. That whole thing with the Nazi soldier — you know how that got started? These things are so random. In a writing class [our teacher] asked us to think about our first job. My first job was at a school in the summer. So I started writing and, oddly enough, the first scene, when the Nazi soldier comes in, came almost word for word from that exercise. So much of it flowed from that. … You just can’t predict these things. But I was definitely rooting for her the whole way. I saw her as being a strong person. I did know the general arc — that she was going to have to face down her father.

MP: One of the other interesting characters was the woman who ran the resistance hospital.

MW: She was modeled on a real person — Iris Origo. She was in a different situation, but she was a similar character. She lived on the other side of Italy. She was English-American, and she married an Italian from a good, old family. She wrote a wonderful journal about the war, called “War in Val D’orcia.” She had a school for young children. I had the Marchesa doing a clinic. She was definitely inspired by Iris Origo. Now a new biography of Origo has come out. She was a very cultured, interesting woman — and, again, so courageous to defy the occupation around her.

MP: You have a reading coming up [tonight] …

MW: Two — the other one is the next night, in Wayzata. I’m nervous about those — I just finished reading Pat Conroy’s book, “My Reading Life.” He says, “Writers reading from their work is like watching snails race”!

MP: So now that you have one novel under your belt, do you have plans for another — or are you working on another one?

MW: You know, at the moment, I’m kind of going back to memoir mode. I’ve had a book stewing for a long time about the founding of the winery, and it’s going to be kind of a meditation on aging, following the rhythm of the year in a winery. … I would love to write another novel, but I am waiting — it has to be a lightning strike again, where I just say, “This is it.” Because it takes so much time, so much work. And for me, writing is so hard. I am an action person, an extraverted person. So sitting down at a desk with that blank page is the hardest thing for me … any distraction will do — anything. … So I know that I need it to be the right idea. [Writing “The Golden Hour”] was fun — in so far as it was not hideously hard.