Arts & Culture
MNopedia
This content is shared with MinnPost by MNopedia, the digital encyclopedia created by the Minnesota Historical Society and supported by the Legacy Amendment's Arts and Cultural Heritage Fund.
Jan. 8, 2013 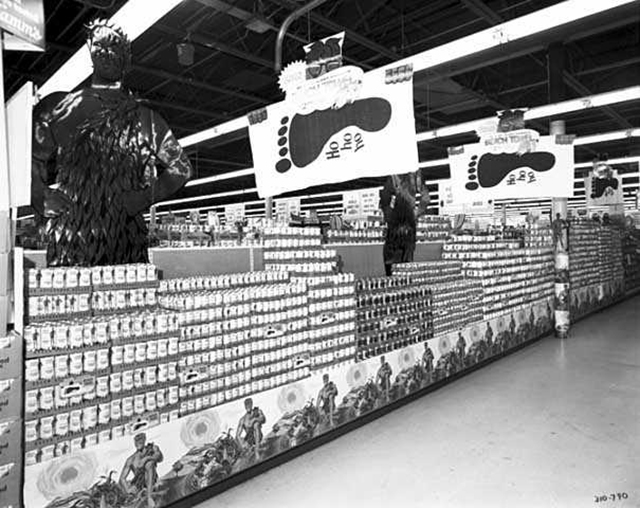 First founded in 1903 as the Minnesota Valley Canning Company (MVCC), the Green Giant Company, as it later became known, became one of the largest producers of canned corn and peas in the United States. From its base in Le Sueur, the company developed new ways of growing, manufacturing, and marketing canned vegetables. Its mascot, the Jolly Green Giant, can be found in grocery stores around the United States.

The MVCC was initially a venture of local investors in Le Sueur. A salesman and canner named John Silver Hughes convinced them to build a cannery in 1903, suggesting that they hire him to run the line. Hughes had already started canneries in Wisconsin and Michigan. At the time, industrial canning was a relatively new process, and there were few experts able to run a cannery. Hughes managed operations in Le Sueur for two years before leaving to found a cannery elsewhere.

After Hughes’ departure, the initial years of the MVCC were marked by instability as the company’s leaders attempted to understand the nature of the emerging canning industry. During these years, the MVCC only canned white cream-style corn, but in 1907, the company expanded and began to can peas as well. For most of the next three decades, it would only can peas and corn.

In 1914, Ward Cosgrove joined the Board of Directors. He also became secretary of the company and would direct it for nearly four decades. During his tenure Cosgrove concentrated on quality, cost control, and innovation. An ambitious man, in 1921, he told the Board of Directors that he wanted the successful but not wealthy company to have a world-class research department. Cosgrove also made it company policy to sell, no matter what the cost, the entire year’s production every year. This policy compelled the company to concentrate on sales, quality, and efficiency because they had to ensure that they had a high quality product to sell to accomplish this task. Cosgrove’s ideas worked, and the MVCC introduced new vegetable varieties to the American market while remaining loyal to their pea and corn lines. In 1925, Cosgrove brought peas back from England that he thought would improve their product line. At the time, small peas were considered better tasting than larger peas. Cosgrove thought that he had found a tender, tasty large pea. He wanted to call it the Green Giant pea, but the patent office told him that the name was not descriptive enough to be trademarked. Instead the MVCC lawyer suggested creating a giant as a mascot to sell the larger pea.

The giant did not initially become associated with the company at large, nor was he green-colored or jolly. The first giant produced on cans of peas looked angry and threatening. In 1928, the company changed the skin color of the giant from white to green. They also added foliage to his outfit. In 1935, ad executive Leo Burnett decided to rename him the Jolly Green Giant, and he eventually became associated with all of the MVCC’s products. In 1950, the MVCC changed its name to the Green Giant Company (GGC). In 1961, the Jolly Green Giant first appeared on television, and his companion, Little Sprout, first made an appearance in 1973.

In the mid-twentieth century the company continued to innovate. In 1929, they invented a new process for canning vacuum-packed corn. Called Niblets, this brand would become the best-selling canned corn in the country in a few years. In 1934, the research and development team created the heat unit method, an equation that they claimed could predict a field’s exact moment of ripeness. In 1961, the GGC began marketing frozen vegetables, including whole ears of corn under its Niblets brand.

During the 1960s, the GGC followed the standard business practice of the time and diversified, opening garden centers and restaurants. By the 1970s, diversification had lost its appeal, and the company ended these ventures. Still profitable, it merged with Pillsbury in 1979. General Mills, in turn, bought Pillsbury in 2001, and in the early twenty-first century Green Giant remains a division within that larger company.

Peas, corn and beyond: Minnesota’s Green Giant company was a canned food pioneer