Arts & Culture
MNopedia
This content is shared with MinnPost by MNopedia, the digital encyclopedia created by the Minnesota Historical Society and supported by the Legacy Amendment’s Arts and Cultural Heritage Fund.
June 17, 2014 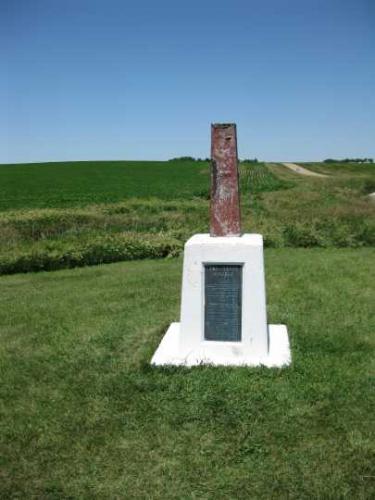 Photo by William E. Lass
Tri-State marker at the junction of the states of Minnesota, Iowa, and
South Dakota, looking north. The marker was originally erected in 1859.

Minnesota’s boundaries were established by treaties between the U.S. and Great Britain and the formation of the states of Michigan, Wisconsin, Iowa, and Minnesota.

Minnesota’s northern boundary was the first one formed. Most of it was created by the Treaty of Paris (1783), under which Great Britain recognized American independence. The treaty specified that the international boundary would run from Lake Superior by an all-water route to the northwest point of Lake of the Woods. From that point it was to proceed due west to the Mississippi River. Unknowingly, the diplomats had agreed on a geographical impossibility. The map that they used, made by John Mitchell in 1755, contained errors.

By the Convention of 1818, negotiated in London, the U.S. and Great Britain closed the northwest boundary gap. They did so by agreeing on the boundary that divided the Louisiana Purchase and Canada. The treaty stated that a due north-south line running through the most northwest point of Lake of the Woods would be the boundary to the forty-ninth parallel. From that point, the international line followed the forty-ninth to the continental divide in the Rocky Mountains.

Beginning in 1822, a joint Anglo-American boundary commission worked for four successive years west of Lake Superior. Its surveyors charted three different water routes from Lake Superior to Lake of the Woods. They also mapped Lake of the Woods and marked its most northwest point. The site was about 27.5 miles north of the forty-ninth parallel.

In 1842, Secretary of State Daniel Webster and British emissary Lord Ashburton met to resolve the Maine–New Brunswick boundary dispute. But they also agreed on the present boundary from Lake Superior to the northwesternmost point of Lake of the Woods.

The diplomats fixed the northwest point of Lake of the Woods as it had been determined in the 1820s survey. They further agreed that the boundary from the northwest point was to run due south to the forty-ninth parallel. By reconciling the boundaries laid out in the 1783 and 1818 treaties, Webster and Ashburton formalized the creation of the Northwest Angle. This resulted in the U.S. acquiring 123 square miles of land on the Canadian side of Lake of the Woods.

Minnesota’s southern boundary of 43º 30′ N was created when Iowa was admitted as a state in 1846. When Iowa first tried for statehood status in 1844, many of its politicians wanted an area that would extend to the present-day Twin Cities. But Iowa voters preferred a state whose greatest length would be between the Mississippi River on the east and the Missouri and Big Sioux Rivers on the west.

Once Congress accepted these rivers as boundaries, it limited Iowa’s northern extent. Congress decided on 43º 30′ because it was near the divide between the watersheds of the southward-flowing Des Moines and Iowa Rivers and the northward-flowing Blue Earth River.

When Wisconsin statehood was proposed in December 1846, many Wisconsinites wanted a western boundary that followed the Mississippi to its source in Lake Itasca and thence due north to the international border. They insisted that this was the only possible demarcation. Wisconsin, they said, had to include all of the remaining land in the old Northwest Territory. The Northwest Ordinance of 1787 had stated that no more than five states should be formed out of the territory.

Congress, however, proposed to limit Wisconsin to its present western boundary. The line follows a straight course due south from a specified point on the St. Louis River to the St. Croix River. It then runs along the center of the St. Croix and the Mississippi.

Delegates at Wisconsin’s constitutional conventions contested this boundary. Generally, the people who lived in the St. Paul–Stillwater area did not want to belong to the state of Wisconsin. They preferred a new state to the northwest of Wisconsin. As a result, they tried to get Wisconsin’s northwest boundary placed well east of the St. Croix.

Among other things, their spokesmen insisted that the St. Croix River valley should be united rather than divided by the river. But some Wisconsin expansionists called for a northwest boundary running from the mouth of the Rum River to the St. Louis River. Congress compromised these positions. Thus, when Wisconsin was admitted to the Union in May 1848, its western boundary was made the same as had been first proposed.

As formed in 1849, Minnesota Territory was bounded by Canada, Michigan (in a portion of Lake Superior),Wisconsin, Iowa, and the Missouri and White Earth Rivers. When statehood was first seriously considered in 1856, it seemed that only the western boundary needed to be marked.

Territorial delegate Henry M. Rice proposed a western boundary close to the present one. He and his supporters believed that a north-south state would provide a diverse economy based on farming, lumbering, and possibly mining.

But many Minnesotans from the region south of St. Paul supported a radical alternative. They wanted a state extending westward from the St. Croix to the Missouri. Advocates of such a long and narrow state proposed several northern boundary possibilities.

The southernmost one lay only about seventeen miles north of the latitude of St. Paul. Such an east-west arrangement, they insisted, would assure Minnesota’s future as an agricultural realm. It would also attract a transcontinental railroad and cause the capital to be moved from St. Paul to a more central location.

In 1858, mainly because of Rice’s position and influence, Congress approved Minnesota as the thirty-second state. With the exception of its Lake Superior portion, it had the shape of present-day Minnesota.

In the congressional acts that created the states of Michigan, Wisconsin, and Minnesota, their borders in Lake Superior were imprecise. Finally, in 1947, the three states agreed on a boundary compact that clearly outlined their Lake Superior extents.

In 1990, the U.S. Census Bureau began adding the area of all adjoining waters to official state areas. The inclusion of its Lake Superior section of 2,546 square miles sharply increased Minnesota’s size and changed its shape.