Arts & Culture
MNopedia
This content is shared with MinnPost by MNopedia, the digital encyclopedia created by the Minnesota Historical Society and supported by the Legacy Amendment’s Arts and Cultural Heritage Fund.
July 1, 2014 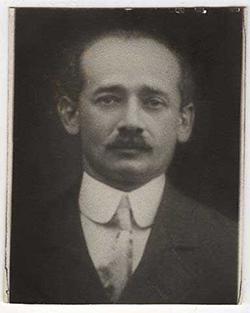 Founded in 1912 by Rabbi Samuel Deinard as part of an effort to unify the German and Eastern European Jews of Minnesota, the American Jewish World newspaper celebrated its centennial in 2012.

At the turn of the twentieth century, German Jews who had come to Minnesota as early as the 1850s and the more recent arrivals from Eastern Europe had little contact with each other. They lived in different neighborhoods and worshiped at different synagogues.

Soon after Samuel Deinard arrived in Minneapolis in 1901 he set out to change the situation. His background and personality made him ideally suited to bridge the gap in the Jewish community. He was by birth an Eastern European Jew. Yet he was also a Reform rabbi, the spiritual leader of Shaarai Tov (Gates of Goodness; today, Temple Israel). At the time, almost all Reform Jews had German-speaking roots.

Deinard was a Zionist, a supporter of creating a Jewish homeland in Palestine. Most Reform Jews at the time rejected this position as too radical. Most Eastern European Jews, who were predominantly Orthodox, supported Zionism. Deinard spoke six languages fluently, including German, Yiddish, Hebrew, and English. All these factors, as well as his personal warmth, earned Deinard the trust and esteem of the Eastern European immigrants.

Deinard’s first newspaper was the Jewish Progress, a weekly news magazine founded in 1904 that covered Minneapolis and St. Paul. It soon failed, as did the Judean, founded the following year. Undaunted, Deinard founded a third weekly, the Scribe, in 1907. A large number of Minneapolis Jews spoke Yiddish as their primary language, so the Scribe published a four-page Yiddish supplement. But it too ceased publication after several years. Another rabbi, Israel Marks, published and edited a Minneapolis Yiddish newspaper, Der Shabbosidge Post (the Saturday Post), from 1917 to 1921.

Deinard tried once more in 1912 with the Jewish Weekly. He hired Leonard (Leo) Frisch, a recent University of Minnesota graduate, to assist him in running the publication. It ceased publication after six months, but Deinard and Frisch held onto the idea. It was formally reborn as the American Jewish World (AJW), its current name, in 1915. Deinard handed the editor’s reins to Frisch. Rabbi C. David Matt of Adath Jeshurun Congregation was assistant editor until 1917. After Deinard’s sudden death in 1921 at age forty-eight, Frisch also became publisher, a role he maintained for over six decades.

The news magazine added national and international news that affected the Jewish community. Jewish wire services provided the stories. The magazine also began to cover the Jewish communities of Duluth, Rochester, and the rest of Minnesota, western Wisconsin, and the Dakotas. Synagogue and organization news, social items, and life event announcements were widely read. Families took out ads wishing readers a happy Jewish new year before the High Holidays. This editorial mix continued into the twenty-first century.

In 1964, after the death of his brother, business manager William T. Frisch, Leo Frisch hired Norman Gold. Gold carried out Frisch’s decision to change the publication’s format from a magazine to a tabloid newspaper. Gold became editor and publisher in 1973, one year after Frisch’s retirement.

In 1980 AJW columnist Rabbi Marc Liebhaber bought the newspaper. Gold continued for two more years as executive editor. Liebhaber then became editor. In 2006 a local group of investors, includingAJW editor and publisher Mordecai Specktor and music producer Steve “Funkytown” Greenberg, bought the assets of the AJW from Liebhaber. In the same year AJW published the first of its annual guides to Jewish resources in Minnesota.

The recession of 2008 and the rise of digital media reduced the AJW‘s advertising revenue. Its publication schedule changed from weekly to biweekly in May 2009.

The AJW survived to celebrate its centennial in 2012. It remains independently owned in an era when similar newspapers in other cities are mostly published by Jewish community groups.