Arts & Culture
MNopedia
This content is shared with MinnPost by MNopedia, the digital encyclopedia created by the Minnesota Historical Society and supported by the Legacy Amendment’s Arts and Cultural Heritage Fund.
Feb. 3, 2015 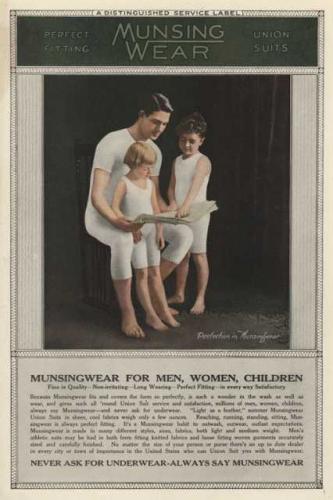 When George D. Munsing came to Minnesota in 1886 to produce a new line of woolen union suits, he founded an underwear empire. From long johns to girdles, the Minnesota company urged generations of consumers, “don’t say Underwear, say Munsingwear.”

Union suits like those that Munsing planned to produce were not new. The one piece suit of long underwear became popular in the 1860s and was essential for those who lived and worked in cold climates. Although woolen underwear was warm, it was often itchy. George Munsing developed a method for silk-plating wool. He knitted a layer of silk over the surface of wool fabric. The resulting underwear was as warm as wool but much more comfortable.

In 1887, Munsing founded the Northwestern Knitting Company with Frank H. Page and Edward O. Tuttle. In their early years, the company’s production was slow and they found difficult to meet the orders that they received. However, the business grew quickly after investments by Minneapolis businessmen, includingCharles Pillsbury and Thomas Lowry.

In 1897, the Northwestern Knitting Company made advertising history. Their Ladies’ Home Journaladvertisement featured a young girl wearing a union suit. Advertisements had never before shown their underwear on a live model. The company’s bold advertising strategy was effective. Sales boomed and the company grew rapidly. By 1900, the Northwestern Knitting Company sold eighty styles of long underwear. By 1917, the company was producing 30,000 garments per day.

In 1904, Northwestern Knitting began constructing a new factory. The new complex, completed in 1915, spanned a city block. The company soon had a new name as well. In 1919 the company renamed themselves Munsingwear in honor of founder George D. Munsing.

By 1920, Munsingwear employed some 3,000 workers, 85 percent of whom were female. That made Munsingwear Minnesota’s largest employer of women. Munsingwear employees were called Munsingites, and they had an active social community. Workers started musical groups, social clubs, and sports teams. Munsingwear also encouraged employee literacy. In 1911 they partnered with Minneapolis librarian Gratia Countryman to open a library branch in the factory.

Still, life as a Munsingite wasn’t easy. Working days were long and the machinery was dangerous. The company gave preferential treatment to American-born workers, and managers favored Scandinavians over other immigrant groups. Munsingwear management also worked to prevent their employees from joining unions. Nevertheless, Munsingwear was ahead of many other companies in offering free medical and dental care to employees. Many Munsingites spent their entire careers working through the ranks of the factory, and some were fiercely loyal to the company.

Changes in fashion and central heating made long underwear sales decline, but Munsingwear adapted. They established a design department in 1920 and emphasized their products as the latest fashion. In the early 1930s, Munsingwear introduced a line of girdles called “Foundettes.” The product took off and was key to Munsingwear’s survival during the Great Depression.

While Munsingwear was known for their wide range of undergarments, the factory produced other items as well. During both World Wars, the Munsingwear factory made clothing as well as bandages and other medical items. In 1958, Munsingwear created the wool-cotton blend fabric that was used in hot-pack polio treatment at the Sister Kenny Institute.

In the 1950s the postwar consumer boom was good to Munsingwear. They introduced new clothing lines, including Hollywood Vassarette lingerie and Grand Slam golf shirts. However, declining business in the 1970s led to the plant’s closure in 1981.

The vacant Munsingwear factory on Minneapolis’s North Side was listed on the National Register of Historic Places in 1983. It reopened in 1985 as the International Market Square. In 2002, the Original Penguin brand was re-released. It featured the original Munsingwear penguin logo on a line of vintage style sportswear. Both the building and the Penguin brand stand as reminders of nearly a century of Munsingwear innovation in Minnesota.

Munsingwear and the Minnesota underwear revolution