Arts & Culture
MNopedia
This content is shared with MinnPost by MNopedia, the digital encyclopedia created by the Minnesota Historical Society and supported by the Legacy Amendment’s Arts and Cultural Heritage Fund.
May 26, 2015 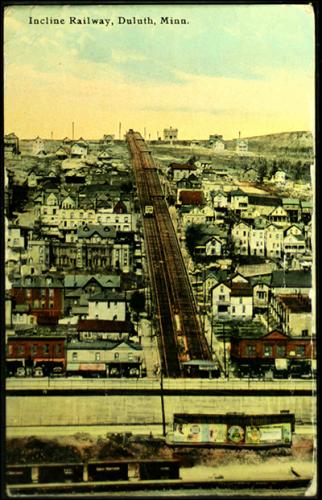 In December 1891, the Duluth Street Railway Company opened an incline railway on the right-of-way of Seventh Avenue West. The company had received a charter from the state in 1881 to build a streetcar line for Duluth, and this railway was part of the larger system. The hillside was too steep for a regular rail line, and cable powered lines were often used in similar situations.

From a base station on Superior Street, the Incline (as it was known) climbed 509 feet in slightly more than half a mile. The grade ranged from 15 to 25 percent. Riding along the ten-foot gauge track, the original pair of forty-one by fifteen-foot cars counterbalanced each other, one going up while the other one descended. They were built to accommodate four teams and wagons, or up to 250 standing passengers. The Incline was powered by a stationary steam engine at the top; a one-way trip took sixteen minutes.

When the hoped-for ridership failed to develop, the railway company decided to offer a variety of attractions. On July 4, 1892, it opened the Beacon Hill pavilion at the top of the Incline. The pavilion featured a restaurant and theater, and was the site of such events as hot-air balloon launchings.

A fire in the powerhouse engine room on May 28, 1901 spread to the pavilion, destroying both structures. The intense heat melted the cable, releasing one of the twenty-seven-ton Incline cars, which was also on fire. The flaming car raced down the track and demolished the base station at Superior Street. Amazingly, no one was injured.

The Incline was out of service until January 1, 1902. When service resumed, a single vehicle resembling a streetcar (twenty-two feet long by eight feet wide) ran on the west track, balanced by a counterweight on the east track. Electric motors replaced the steam engine. Intermediate stations were located at Fourth, Fifth, and Seventh Streets.

A single car providing service only once every half hour eventually proved to be inadequate, so, in 1911, the Incline was again modified. Two somewhat larger new cars (each twenty-four feet long by eleven feet wide) were raised and lowered by an electric hoist at the top of the Incline. An engineer ran the hoist, and each car carried a conductor, who operated the doors and brakes, collected fares, and communicated with the engineer by telephone.

The line was designed with five relocated intermediate stations that were spaced so that, when stopped, both cars would simultaneously be at a station. Once stopped, both conductors had to give the engineer an all-clear signal before either car could start moving. Cars ran every fifteen minutes, with a one-way trip taking eight minutes at six miles per hour.

A survey taken in 1925 shows that the Incline carried an average of 2,170 weekday passengers. By contrast, the connecting Highland streetcar line carried an average of only 1,114 weekday passengers. Not surprisingly, hourly checks showed that most riders traveled downhill in the morning rush hour and uphill during the afternoon rush hour. Probably, most of these were regular commuters, boarding at the intermediate stations.

Although the Duluth Incline railway was never profitable, it and the Highland line were the last remnants of the streetcar system to be replaced by buses. Their last day of service was September 4, 1939.

Aaron Isaacs is an historian with the Minnesota Streetcar Museum and before that the Minnesota Transportation Museum. He edits the quarterly Twin City Lines history magazine and is co-author of the upcoming book Twin Ports by Trolley — The Streetcar Era in Duluth-Superior, for the University of Minnesota Press.