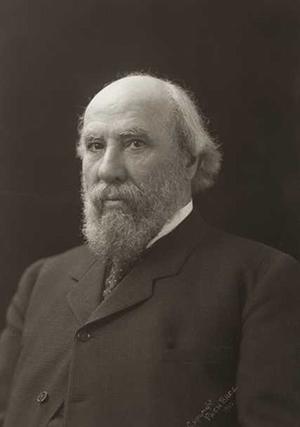 James J. Hill fit the nickname “empire builder.” He assembled a rail network—the Great Northern (1878), the Northern Pacific (1896), and the Chicago, Burlington and Quincy (1901)—that stretched from Duluth to Seattle across the north, and from Chicago south to St. Louis and then west to Denver. He was one of the most successful railroad magnates of his time.

Hill arrived in St. Paul in 1856, from a farm near Rockwood, Ontario. He got work as a clerk on the waterfront with the firm of Brunson, Lewis, and White, agents for the Dubuque Packet Company (a steamboat line). From there, Hill observed both the increasing demand for shipped goods and how laborious and expensive steamboat traffic was. He concluded that in better transportation lay the path to wealth.

Soon after railroads came to St. Paul, in 1866, the newly formed James J. Hill Company built a warehouse between the tracks and the steamboat landing to make moving goods between boat and train cheaper and more secure. Hill prospered.

In 1867, he saw that coal had advantages over wood as a fuel—more concentrated carbon and an apparently inexhaustible supply. By 1875, his Hill, Griggs and Company dominated the Twin Cities coal market. Buying coal in high volume, he got discounts from sellers and shippers and undercut his competitors in price. He made a second fortune.

Intrigued by the rising flow of immigrants into the Red River valley, in winter 1870 Hill made an adventure-filled visit. He traveled by dogsled, waded the icy Red, set a guide’s dislocated shoulder with a stick and a rope, and returned convinced of the area’s bright future. In 1871, he went into the steamboat business, hauling goods and immigrants north toward Winnipeg and bringing back the bountiful wheat of Dakota Territory. His net worth rose to $150,000.

In the early 1870s, the St. Paul and Pacific Railroad ran a line toward the Red River but fell into receivership. In 1878, with partners Norman Kittson, Donald Smith, and George Stephen, Hill bought the company for roughly $5 million. He valued its assets at more than $19 million.

Hill and four associates renamed the railway the St. Paul, Minneapolis and Manitoba to reflect its focus: hauling people and goods up the Red River valley toward Manitoba, and wheat back to St. Paul and beyond. Hill built an efficient road and lowered shipping costs; the abundant profits were reinvested in improvements and expansion.

Never satisfied, Hill now looked west to the mines of Montana and beyond. In 1887, “the Manitoba” began building cross-country. Renamed the Great Northern, it reached the Pacific in January 1893.

The 1893–1896 Depression stressed railroads and forced Hill’s competitor, the Northern Pacific, into receivership. The well-run Great Northern made steady profits, partly by cutting wages. Eugene Debs’s American Railway Union struck the Great Northern in summer 1894, and Hill consented to an arbitration that restored the cuts.

In April 1896, through an arrangement with New York financier J.P. Morgan, Hill acquired control of the Northern Pacific.

In 1902, Hill bought the Chicago, Burlington and Quincy, a profitable railway based in Chicago that ranged south to St. Louis and Kansas City, then west to Denver. He fought off a furious effort by Edward Harriman to crack Hill’s empire by buying control of the Northern Pacific out from under him. Hill then helped create Northern Securities as a secure holding company for the stock of several railroads, including the Northern Pacific and Great Northern. The U.S. government challenged this under the Sherman Anti-Trust Act. In 1904, the Supreme Court ordered Northern Securities dissolved; Hill thereafter ran his railways separately.

Away from his office, Hill and his wife Mary raised a large family, first in Lowertown and then on Summit Avenue. Three sons and six daughters survived to adulthood. Hill gave often to charity—usually in small amounts to individuals, sometimes on a bigger scale. He built the St. Paul Seminary and helped endow the downtown St. Paul Public Library. He owned the St. Paul Globe newspaper from 1896 to 1905 and the First National Bank of St. Paul from 1912 until his death.

Hill resigned as president of the Great Northern in 1907 but stayed on as chairman of the board until 1912. He died on May 29, 1916, after a short illness, at age seventy-seven.

Asked to stay open during the COVID-19 crisis, Minnesota child care providers are calling for financial aid to help them stay afloat