Arts & Culture
MNopedia
This content is shared with MinnPost by MNopedia, the digital encyclopedia created by the Minnesota Historical Society and supported by the Legacy Amendment's Arts and Cultural Heritage Fund.
Nov. 10, 2015 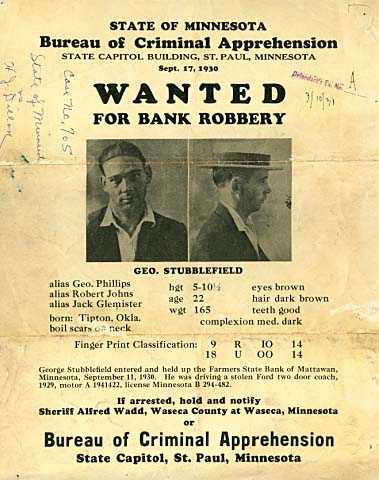 St. Paul in the late 1920s and early 1930s was known as a “‘crooks’ haven”—a place for gangsters, bank robbers, and bootleggers from all over the Midwest to run their operations or to hide from the FBI. The concentration of local organized crime activity prompted reformers and crime reporters to call for a “cleanup” of the city in the mid-1930s.

St. Paul earned its reputation as the “sanctuary for criminals” in the Midwest with the help of corrupt politicians and police chiefs who agreed to turn a blind eye to gangsters’ underground activities, which included smuggling, racketeering, and gambling. This collaboration began in 1900 with the Layover Agreement, an unofficial contract between criminals and Chief of Police John O’Connor.

In exchange for tip-offs about FBI raids and protection during their “layover” in the city, the gangsters first agreed to check in with the St. Paul police when they were in town. Secondly, they gave a portion of their gains to the police department. Finally, they agreed to commit no crimes within the city limits, though Minneapolis was fair game. Police chiefs after O’Connor, such as Frank Sommer (1922–1923) and Thomas A. Brown (1930–1932), continued to use the “O’Connor System” in an effort to keep crime levels down in St. Paul and to profit from gangsters’ illegal operations.

The prohibition of alcohol from 1919 until 1933 also encouraged the rise of St. Paul as a center for gangsters’ activities. The Volstead Act (or the National Prohibition Act), introduced by Minnesota Congressman Andrew Volstead in 1919 and made part of the U.S. Constitution as the Eighteenth Amendment, banned the manufacturing, sale, and transportation of alcoholic beverages. The closing of breweries and distilleries resulted in the rise of bootlegging (the smuggling and illegal sale of alcohol), and St. Paul became known as one of the “wettest” cities in the nation. The prohibition of liquor also led to an increase in organized crime, since mobs and gangs controlled bootlegging operations.

Knowing that they were generally safe in St. Paul, notorious criminals—including bank robber John Dillinger and his girlfriend Evelyn Frechette; racketeer and mob leader Al “Scarface” Capone; and the outlawed duo Clyde Barrow and Bonnie Parker—stayed in the city at some point, though most of their crimes were committed in other Midwestern states. In 1932, however, more than 20 percent of the nation’s bank robberies took place in Minnesota.

Gangsters frequented favorite spots throughout the city, such as the Green Lantern Saloon on Wabasha Street and Nina Clifford’s brothel on Washington Street. Some gang leaders used St. Paul as the headquarters of their operations. Leon Gleckman, known as the “Bootlegging Boss” and the “Al Capone of St. Paul,” established the base of his bootlegging business at the St. Paul Hotel.

Alvin “Creepy” Karpis and the Barker family set up a home in West St. Paul. FBI director J. Edgar Hoover had his eye on the Karpis-Barker gang after they robbed a store in Missouri and killed a sheriff on December 19, 1931. Hoover targeted Katherine “Ma” Barker, the mother of two Karpis-Barker gang members, as the leader of the gang. FBI files suggest that she was not heavily involved in her sons’ activities. Former gang members later claimed that she tagged along to give the impression of a mother traveling with her sons. Nevertheless, Hoover helped establish Ma Barker’s reputation among FBI agents and the American public as the gang’s mastermind.

Although they had close calls with an FBI raid, the gang was able to flee in time to Wisconsin, thanks to tip-offs from a friend with contacts in the St. Paul police department. The gang suspected that Ma Barker’s boyfriend, Arthur Dunlop, had spilled details of their successful heists to their landlady’s son. When the police arrived at their hide-out spot in Webster, Wisconsin, they only found Dunlop’s dead body on the shores of a nearby lake.

In 1933 and 1934, the gang returned to St. Paul to plan the kidnappings of wealthy St. Paul businessmen William Hamm Jr. (president of the Hamm Brewing Company) and Edward Bremer (president of the Commercial State Bank of St. Paul), in exchange for large ransoms. Both victims were released shortly after the gang received the ransoms. But the kidnappings showed signs of the O’Connor system breaking down, since these crimes had been committed inside the city of St. Paul. Federal and local efforts to track down the kidnappers intensified as the story grabbed national headlines, and the Karpis-Barker gang members began to doubt the reliability of their police connections.

Similar FBI hunts for gangsters throughout the Midwestern states dragged on for more than a decade, while reformers such as St. Paul police chief Thomas Dahill and Mayor Mark H. Gehan called for a “war on hoodlums.” In March 1934, Dillinger had a shootout with the police and the FBI at his St. Paul residence, the Lincoln Court Apartments. Although he managed to escape to his doctor’s clinic in Minneapolis to hide and to receive treatment for his wounds, newspaper coverage of the shootout and Dillinger’s escape convinced citizens that the city needed to be “cleaned up.” This incident also made St. Paul a target of federal and state law enforcement agencies when Hoover sent in FBI agents to search the city for evidence of Dillinger.

Dillinger and other “public enemies” fascinated the American public with their ability to survive shootouts and escape police raids. Some local Minnesota residents, however, such as the members of the St. Paul Women’s Club, acted to end the crime wave. They helped elect the reform-minded Mayor Gehan and alerted the FBI to sightings of gangsters. Other Midwestern residents made deals with the FBI, offering them information about gangsters’ whereabouts. This was how Dillinger was finally caught: with a tip-off from a woman who agreed to help capture him. When Dillinger emerged from the Biograph Theater in Chicago with two women (one of whom was the informant), FBI agents cornered him in an alley, shot him five times, and killed him.

In May 1936, Hoover, who had been criticized by a senator for not making any arrests himself, claimed to have personally arrested Alvin Karpis. He brought Karpis to trial in St. Paul, where he was charged for his involvement in the Hamm and Bremer kidnappings. On August 3, 1936, Karpis pled guilty to all charges and received a life sentence in Alcatraz. The “gangster era,” with its sensationalized hunts for wanted criminals throughout the Midwest, was finally winding to a close.

Sharon Park is a PhD candidate in history at the University of Minnesota.