Arts & Culture
MNopedia
This content is shared with MinnPost by MNopedia, the digital encyclopedia created by the Minnesota Historical Society and supported by the Legacy Amendment’s Arts and Cultural Heritage Fund.
April 19, 2016

Northwest Airways began passenger service to Chicago on July 5, 1927. Stunt pilot Charles “Speed” Holman carried two passengers on the inaugural flight. Engine failure forced an emergency landing near Hastings, Minnesota, but a second attempt made it safely to Chicago at 2:30 a.m. on July 6. The airline carried 106 passengers in the first year, charging thirty dollars one way and fifty dollars round trip. The airline made its first international flight to Winnipeg in 1928 but discontinued the route after three months due to objections from the Canadian government.

Minnesota investors purchased Northwest Airways in 1929. Its operations moved to St. Paul’s downtown airfield the next year, and routes expanded to the Dakotas, Montana, and Washington State. The company incorporated under Minnesota law on April 16, 1934 as Northwest Airlines, Inc. and introduced service to the east coast.

During World War II, the company operated a bomber modification center at St. Paul’s Holman Field and flew military cargo missions to Canada, Alaska, and the Aleutian Islands. In 1947, Northwest flew the Great Circle Route over the Pacific Ocean to Japan, China, Korea, and the Philippines. It adopted the name “Northwest Orient” for advertising purposes. The airline’s Asian connections proved useful in 1950 when the U.S. government chose the airline for the Korean Air Lift mission.

Northwest Airlines moved operations into new headquarters at Wold-Chamberlain Field (formerly Speedway, later Minneapolis-St. Paul International Airport) in 1961. It introduced flights to California. In the 1970s, passengers could fly nonstop from Chicago to Hawaii and take advantage of computerized ticketing for flights to Asia. 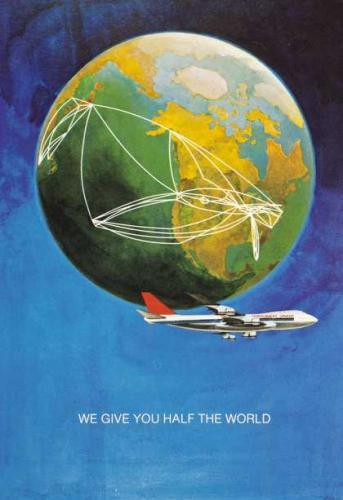 The Airline Deregulation Act of 1978 ended government control of airlines. Northwest continued to thrive in the more competitive market. In the following year, it added more than twenty domestic markets and began transatlantic service to Sweden and Denmark.

Struggling with debt from the buyout, Northwest sought financial aid from the Minnesota legislature in 1991. Even with the help of $761 million in public funds, the airline teetered on the brink of bankruptcy in 1993. Relief came when pilots and other employees agreed to $980 million in wage and benefits concessions.

Northwest experienced the first of several setbacks in 1998 when a pilots’ strike halted service for nearly three weeks. The September 11, 2001 terrorist attacks caused the company to reduce its flight schedule by an estimated twenty percent, lay off ten thousand workers, and heighten security. Northwest reduced its fares and offered special business perks to attract customers. In 2003 the company cut flights again due to unrest in Iraq. In 2005 Hurricane Katrina destroyed oil rigs in the Gulf of Mexico, causing the price of fuel to rise. Northwest responded by cutting wages and selling off aircraft.

These measures failed to save the faltering airline. In 2005, Northwest filed for bankruptcy. It emerged from reorganization in 2007. Executives announced a merger with Delta Air Lines, Inc. the following year. Northwest officially became Delta on January 1, 2010.

The rise and fall of Northwest Airlines

By Linda A. Cameron