Arts & Culture
MNopedia
This content is shared with MinnPost by MNopedia, the digital encyclopedia created by the Minnesota Historical Society and supported by the Legacy Amendment’s Arts and Cultural Heritage Fund.
Jan. 30, 2017 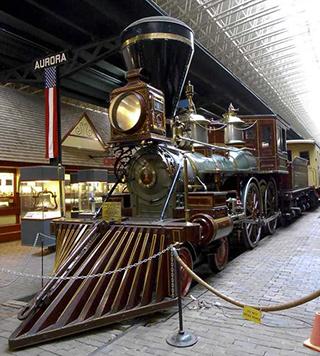 Courtesy of the Minnesota Historical Society
The steam locomotive used to power Minnesota’s first passenger line for the St. Paul and Pacific Railroad.

The St. Paul and Pacific Railroad, or St. P & P, was one of Minnesota’s first major railroads. It was created in 1862 from the remnants of another bankrupt line and strengthened by valuable land grants. It survived financial hardships to become a cornerstone of the Great Northern Railway system, a legendary transcontinental route and an integral part of Minnesota railroad history.

The Minnesota territorial legislature issued a charter to the Minnesota and Pacific Railroad Company (M&P) in 1857. Construction of the line began the same year. The new railroad was to connect Stillwater and St. Paul through outlying communities. To the west, it would be built out to Breckenridge with a branch line extending to St. Cloud.

The M&P was the first active railroad in Minnesota. The land grant it received from the territorial legislature—nearly 2,460,000 acres—ranked in the top ten of those awarded. However, finances were a problem from the beginning. The company lost money through speculation and was forced to sell its assets. It declared bankruptcy in 1860.

The new state legislature purchased the M&P’s assets for $1,000. The company was reorganized in 1862 as the St. Paul & Pacific Railroad Company (St. P&P). Workers completed ten miles of track between St. Paul and St. Anthony but little else. The branch line reached Sauk Rapids in 1867, financed largely by bonds sold to Dutch investors. Only 210 miles of track were laid by 1865. Almost no track is recorded to have been built between 1867 and 1871.

The Northern Pacific (NP) purchased the St. P & P in December 1870. When the NP was forced to declare bankruptcy after the Panic of 1873, one of its original chief stockholders bought it back. The NP’s Dutch investors, who had the line placed into receivership to little effect, held the majority of shares of St. P & P ownership.

The line was significant for a number of firsts, despite its hardships. The wood-burning 4-4-0 locomotive William Crooks was the first railroad locomotive in the state. It hauled passengers between St. Paul and St. Anthony for an inaugural run in 1862 after being delivered upstream from La Crosse on the Mississippi River.

The railroad attracted the attention of powerful investors for the potential that its land grants represented. Chief among them was steamboat magnate and Minnesota entrepreneur James J. Hill. Hill convinced other investors of the line’s potential and eventually formed a group to buy the St. P & P from the Dutch with a combined investment of $5.5 million dollars.

The Dutch transferred their bonds to Hill’s investment group on March 13, 1878, thus giving up control of the company. Bonds were issued for renewed construction on the railroad. With the new bonds, the owner could receive up to $10,000 per mile of track completed. In February 1879, Hill’s group of investors bought out the Litchfield investor group, which had owned so much of the line since 1862. The St. P & P had showed a profit in excess of $500,000 for 1878.

Two different courts permitted the company to exit bankruptcy status in 1879. The new investment group, having directed the St. P & P out of bankruptcy, formed a new entity to take over the company, and on May 23, 1879, they named it the St. Paul, Minneapolis and Manitoba Railway (St. P. M&M). The new company formally took over St. P & P assets in June 1879.

Aaron Hanson studied history and Spanish at the University of Michigan and Illinois State University, where he earned a Master of Arts in Foreign Languages. He is a freelance writer and Spanish interpreter and translator.

The St. Paul and Pacific was a pioneering railroad in Minnesota, if not a very successful one (at least, at first)