Arts & Culture
MNopedia
This content is shared with MinnPost by MNopedia, the digital encyclopedia created by the Minnesota Historical Society and supported by the Legacy Amendment’s Arts and Cultural Heritage Fund.
March 13, 2017 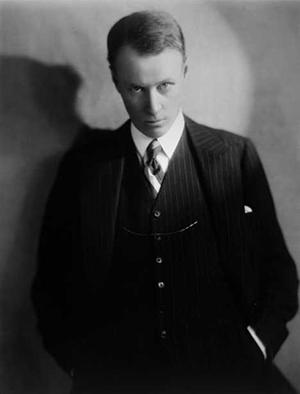 Sinclair Lewis was born on February 7, 1885, in Sauk Centre, Minnesota. He was the youngest of three boys. Their father, Edwin J. Lewis, was the small town’s doctor; their mother, Emma Kermott Lewis, died when Sinclair was six years old. A year later, Lewis’s father married Isabel Warner, who became an important influence in his life.

By all accounts, Lewis was an outsider in his home town. Perhaps because of that, he took comfort in reading as much as he could. He left Sauk Centre in 1902 to attend Oberlin Academy, a college preparatory school. In 1903 he entered Yale, where he began honing his skills as a writer. After taking time away from college to become part of Upton Sinclair’s communal experiment, Helicon Home Colony, Lewis graduated from Yale in 1908.

Lewis’s first book — a young adult adventure novel — was published in 1912 under the pseudonym Tom Graham. During the rest of that decade, Lewis published four, more serious, novels: Our Mr. Wren: The Romantic Adventures of a Gentle Man (1914); The Trail of the Hawk: A Comedy of the Seriousness of Life (1915); The Job (1917); and The Innocents: A Story for Lovers (1917). He also earned a good income selling short stories to magazines such as the Saturday Evening Post.

Lewis married Grace Livingston Hegger on April 15, 1914. He had met her while they were both working in New York; he was reviewing books for the Publishers Newspaper Syndicate, she was an editor at Vogue. The couple had a son, Wells, in 1917, and divorced in 1925. Lewis married again in 1928. His second wife was Dorothy Thompson, a well known newspaper columnist. They, too, had a son, Michael, in 1930. Lewis and Dorothy divorced in 1937. Wells died in World War II and Michael, an actor, died in 1975.

Lewis’s breakthrough as a writer came in 1920 with the publication of Main Street: The Story of Carol Kennicott. The novel takes place in Gopher Prairie (a fictional Sauk Centre) and was loosely based on Lewis’s childhood experiences there; the strong female protagonist was based in part on his stepmother. The novel instantly made Lewis a wealthy man and an international sensation. It sold 180,000 copies in just over six months. It is estimated that two million Americans read it before his next book was published.

The 1920s were extraordinarily successful for Lewis. He followed up Main Street with Babbitt (1922), Arrowsmith (1925), Mantrap (1926), Elmer Gantry (1927), The Man who Knew Coolidge (1928), and Dodsworth (1929). The decade also saw Hollywood produce five movies based on Lewis’s writings. Lewis won the Pulitzer Prize for Arrowsmith but he declined the award, objecting to the judging criteria.

Lewis celebrated a career highlight in 1930 when he became the first American to receive the Nobel Prize in Literature. The Swedish Academy especially admired the author’s 1922 novel Babbitt. Lewis’s Nobel Lecture, delivered on December 12, 1930, was titled “The American Fear of Literature” and was quite critical of American letters, stating that “…in America most of us—not readers alone but even writers—are still afraid of literature which is not a glorification of everything American…”.

After his Nobel, Lewis wrote eleven more novels. They are not considered among his best work. Beginning in 1939, Lewis had a significant relationship with Rosemary Marcella Powers, thirty-six years his junior. He also taught, lectured, and continued to struggle with alcoholism. The mid-1940s found the habitual wanderer settled in Duluth, where he worked on Kingsblood Royal (1947), his novel about race in America based in a fictionalized version of his new home city.

Lewis died in Rome on January 10, 1951. He was cremated and his ashes were buried in Sauk Centre. By the time of his death, Lewis’s reputation had fallen, and his 1961 biography by Mark Schorer, though thorough, did not enhance his legacy. Recent scholarship, however, has brought renewed attention to his writing. The 2016 presidential election helped make It Can’t Happen Here, Lewis’s 1935 dystopian novel about fascism coming to America, one of the top ten best-selling books on Amazon.com.

Son of Sauk Centre: The literary career of Sinclair Lewis