Arts & Culture
MNopedia
This content is shared with MinnPost by MNopedia, the digital encyclopedia created by the Minnesota Historical Society and supported by the Legacy Amendment’s Arts and Cultural Heritage Fund.
April 10, 2017 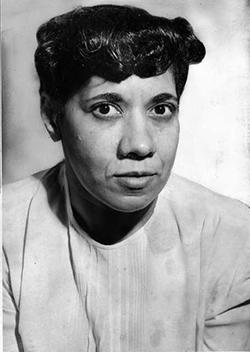 Nellie Stone Johnson was an African American union and civil rights leader whose career spanned the class-conscious politics of the 1930s and the liberal reforms of the Minnesota DFL Party. She believed unions and education were paths to economic security for African Americans, including women. Her self-reliant personality and pragmatic politics sustained her long and active life.

Born in 1905 to Dakota County farmers who stressed religious and racial tolerance, Johnson absorbed lessons about organizing at a young age. Her father was a Nonpartisan League member who rallied Pine County farmers to join cooperatives and elect insurgent candidates to office. Milk and potato prices, Johnson learned, were set in far off Minneapolis. The dairy and electric cooperatives her father promoted helped increase farm income.

After moving to Minneapolis to finish high school, Johnson was hired as an elevator operator by the Minneapolis Athletic Club in 1924. There, and at the West Hotel, she experienced workplace discrimination and faced anti-union employers. She believed the worst discrimination was economic, but trusted that organizing and collective bargaining could improve a worker’s lot.

Johnson met communists, radicals, and the itinerant socialist union organizer Swan Assarson in the 1920s while taking classes at the University of Minnesota. A radical himself who believed in a workers’ society, Assarson mentored Johnson in organizing hotel workers. Johnson’s father also encouraged her activism. Together, they delivered potatoes and rutabagas off his Pine County farm to worker kitchens during the 1934 Teamsters strike.

Minneapolis hotels and restaurants were not organized when the National Labor Relations Act emboldened workers to take action in 1935. The New Deal law changed the landscape in workplaces by protecting organizing and collective bargaining activities. It also motivated Johnson and African American leaders Anthony Cassius and Albert Allen Jr. to talk to union members and educate their co-workers in the city’s downtown hotels.

Cassius led the Curtis Hotel workforce into Local #614 of the Hotel and Restaurant Workers Union. His leadership sparked organizing at other hotel worksites. Allen championed efforts at the Athletic Club, where Johnson and white co-worker George Naumoff soon organized all the shifts. Local #665 of the Hotel Employees Union was quickly chartered at the Athletic Club as an integrated union.

Johnson was one of the first women to sit on her local’s contract-negotiating committee. Gradually, things began to change in the hotel industry. Wage increases and uniform job classifications ended racial and gender pay inequities. At the Athletic Club, Johnson pushed to end in-house segregation of eating and locker room facilities.

Johnson’s prominence in union circles widened. She was elected vice president of her local union in 1936 and sat on the important statewide hotel and restaurant workers’ council. She worked with progressive trade unionists at the Minneapolis Central Labor Union and urged hotel unions to affiliate with the Minnesota AFL. At times, she challenged more conservative AFL union officials to organize the unorganized.

Minneapolis unions supported the Farmer-Labor Party in the 1930s and 1940s. Johnson became deeply involved in the Farmer-Labor Association, the party’s educational arm. At the same time, she was a member of the powerful union-based United Labor Committee, which endorsed candidates. In these roles, she discovered her talent for planning and executing political campaigns.

Organized labor shared the goals of full employment, health insurance, and affordable housing with liberal politicians like Hubert Humphrey, whom Johnson met in about 1938. Humphrey was impressed with her labor and civil rights activism and sought her support when he ran for mayor of Minneapolis in 1943 and again in 1945.

Throughout her career, Johnson remained pragmatic. When the Farmer-Labor Party’s influence waned in the 1940s, she helped create a merged Democratic and FL Party and swung her allegiance to what she believed would be a multi-racial, labor-oriented DFL.

Johnson remained active in labor and DFL politics as the civil rights movement gained momentum in Minneapolis and across the United States. She helped forge the city’s first Fair Employment Commission, successfully ran for the Library Board, and spearheaded passage of the Minnesota’s Fair Employment and Fair Housing Laws (1955 and 1957). In 1972, she campaigned for Van White, the first African American elected to the City Council.

Johnson died in Minneapolis, in 2002, at the age of ninety-six.

Tom Beer is a retired union lobbyist and has contributed to Minnesota History and Ramsey County History. He was co-recipient of the 2011 Solon J. Buck award.

To Nellie Stone Johnson, unions and education were the path to economic security for African Americans