Arts & Culture
MNopedia
This content is shared with MinnPost by MNopedia, the digital encyclopedia created by the Minnesota Historical Society and supported by the Legacy Amendment's Arts and Cultural Heritage Fund.
June 12, 2017 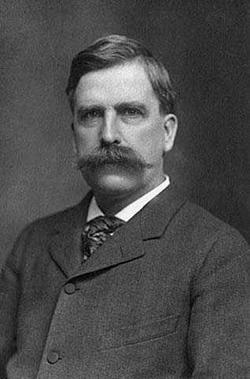 Courtesy of the Minnesota Historical Society
Chester A. Congdon, 1909.

Chester Adgate Congdon accrued a fortune working as a lawyer for the Oliver Mining Company and through investments in the Mesabi Iron Range. He also served as a Minnesota State Representative from 1909 to 1913.

Congdon was born on June 12, 1853, in Rochester, New York. He met his wife, Clara Bannister, while attending Syracuse University. After graduating in 1875, Congdon struggled to establish himself. He accepted a teaching position in Wisconsin in 1878. In 1879, he moved to St. Paul and opened a successful law practice. Congdon later gained notoriety as a U.S. District Attorney, in 1881, and lived on Selby Avenue near the upper-class Summit Avenue neighborhood.

Congdon was lured to Duluth in 1892 to partner with friend and fellow attorney William W. Billson. Shortly after, they were hired to represent the Oliver Mining Company in negotiations with Leonidas and Alfred Merritt over mining rights in the Mesabi Iron Range. Henry W. Oliver was second only to Andrew Carnegie in U.S. steel production.

Congdon became a wealthy man through his relationship with Oliver. After Oliver was forced to sell most of his company shares to Carnegie’s newly formed U.S. Steel Corporation, Congdon purchased cheap mining land on the western Mesabi Range. Congdon and Oliver later profited by leasing this land to U.S. Steel as demand for iron ore increased. With this money, he diversified into other mining companies.

In 1901, Congdon made plans to build a large home on the shore of Lake Superior in Duluth. The home, designed by architect Clarence H. Johnston, was completed in 1908. Congdon called it Glensheen. The name derived from the Congdon family’s origin in the village of Sheen in Surrey, England, and from the forest surrounding the home. The home had thirty-nine rooms, including fifteen bedrooms.

Congdon was a staunch Republican and capitalist. He was also an outspoken critic of wealthy tycoons such as Andrew Carnegie, John D. Rockefeller, and J. P. Morgan. He observed that they hoarded money, only to loan it out at exorbitant interest rates. Congdon felt that business leaders had an obligation to support local communities and society in order to ensure a healthy economy.

Congdon also opposed the policies of Theodore Roosevelt and Woodrow Wilson. He believed that Roosevelt sold out to corporate interests to fund his presidential campaign. Moreover, he later criticized Wilson for his passivity toward corrupt and illegal business practices among the nation’s business elite. Congdon’s cynicism was likely influenced in part by Carnegie’s treatment of Oliver after negotiations with Morgan and Rockefeller over the future of the Lake Superior mining industry.

Congdon officially entered politics in 1909. He was elected to the state legislature in order to oppose a proposed tonnage tax bill that targeted U.S. Steel. The bill would have imposed a five-cents-per-ton tax on all iron ore extracted from Minnesota. Many business leaders and politicians in Northeast Minnesota argued that the bill might discourage U.S. Steel from investing in the western Mesabi and Duluth. Congdon gave a speech at the Capitol urging his colleagues to vote against the bill. The bill eventually failed.

One of Congdon’s lasting contributions to the state of Minnesota is Congdon Boulevard, a road that runs along the north shore of Lake Superior from the Lester River to Stony Point. The route is also known as North Shore Drive. Congdon donated funds for Duluth to purchase the land on the condition that the lakeshore would not be developed. He wanted to preserve the area in its natural state.

Congdon served as the Minnesota representative to the Republican National Convention in 1916. On November 21 that same year, he died of cardiac arrest in St. Paul. He was sixty-three years old. Clara Congdon remained at Glensheen until her death in 1950. Gleensheen is currently a museum operated by the University of Minnesota–Duluth.

Tom completed his master’s degree in European History at the University of North Dakota. His primary research interests include the Roman Empire, Ancient Mediterranean, Late Antiquity, German Enlightenment, and intellectual history. He is a volunteer with the Minnesota Historical Society, and works in student services for the University of Phoenix.