Arts & Culture
MNopedia
This content is shared with MinnPost by MNopedia, the digital encyclopedia created by the Minnesota Historical Society and supported by the Legacy Amendment’s Arts and Cultural Heritage Fund.
July 17, 2017 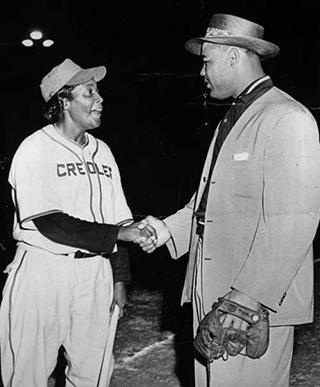 Marcenia Lyle (Toni “Tomboy”) Stone broke both gender and racial barriers by becoming the first female professional baseball player in the Negro Major League. During her career, she played with a variety of men’s teams before making history when she joined the Indianapolis Clowns, a Negro Major League Team.

Stone grew up playing baseball with the neighborhood boys, despite her parents’ objections, and earned the nickname “Tomboy.” Encouraged by her priest, she was the first girl to hold a spot on the St. Peter Claver Catholic Church boys’ baseball team in the Catholic boys’ league.

Stone got her first real break when she joined the Twin City Colored Giants “barnstorming” team at age sixteen. She travelled around the Midwest and Canada with the team until she moved to California following the onset of World War II to be near her sister. She worked odd jobs and settled into the Fillmore neighborhood of San Francisco—sometimes called “the Harlem of the West.” While living there, Stone adopted a new professional name, “Toni Stone.” She met her future husband, Aurelious Pescia Alberga, at a nightclub, and the couple was married in 1950.

At Alberga’s suggestion, Stone applied to play American Legion baseball. To get around the Legion’s age restriction, which required players to be no older than seventeen, she shaved ten years off her actual age and maintained the ruse throughout her career. She played a short stint with the San Francisco Sea Lions of the West Coast Negro League before joining the New Orleans Creoles, a Negro Minor League team, in 1949.

Toni Stone made sports history in 1953 when she signed a seasonal contract with the Indianapolis Clowns in the Negro American League. She was hired to fill the second-base position vacated by Hank Aaron when he joined the Milwaukee Braves.

As one of the first women to play in the Negro Major League, Stone endured substantial harassment from opponents, critics, and fellow teammates. With the rise of integrated baseball, Negro League baseball began to wane. Though Stone’s skills improved the team, its managers hired her as a strategy to sell tickets. When the team’s owner suggested that she wear a skirt, however, Stone refused. Serious about her sport, she insisted on wearing the official uniform.

In an attempt to make the Indianapolis Clowns more marketable, publicists for the team fabricated a biography for Stone. They claimed that she had attended Macalester College when in fact she had never graduated from high school. They reported her seasonal salary at $12,000 when, by her own admission, she was paid about $400 per month. There is some evidence that the team’s management inflated her statistics to sustain the public’s interest. It is widely accepted, however, that she achieved a batting average of .364—the fourth highest in the league for 1953. Regardless of the hype, Stone proved herself to be a true athlete.

She spent just one season with the Indianapolis Clowns. Her favorite memory with the team was getting a hit off legendary pitcher Satchel Paige during an exhibition game. The following season, Stone played with the Kansas City Monarchs. Feeling exploited, and dissatisfied with how little time she was allowed to spend on the field, she quit and returned to California. She continued to coach and play semi-professional ball well into her sixties.

Stone’s contributions to baseball were largely forgotten until later in her life. She is remembered in the Negro Leagues Museum in Kansas City, Missouri. The city of St. Paul declared March 6, 1990, as “Toni Stone Day,” and later named a neighborhood ball park “Toni Stone Field.” She was honored by the Baseball Hall of Fame in 1991 and was inducted into the Women’s Sports Hall of Fame in 1993. In 1997, the Great American History Theatre in St. Paul commemorated her story in a world premiere production, Tomboy Stone.

Wendy Jones is the Director of Education for the Minnesota Historical Society, where she has worked in various positions since 1988. One of those jobs was to research and develop the live interpretive programs for the museum exhibits of the new Minnesota History Center in 1992. Toni Stone is one of the many historical characters brought to life through the History Players program created by Jones, who, not coincidentally, is a huge baseball fan.

Barrier-breaking athlete Toni Stone got her start in baseball in St. Paul