Arts & Culture
MNopedia
This content is shared with MinnPost by MNopedia, the digital encyclopedia created by the Minnesota Historical Society and supported by the Legacy Amendment's Arts and Cultural Heritage Fund.
July 24, 2017 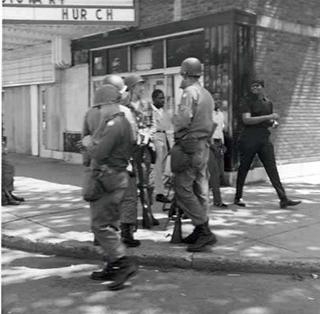 On the night of July 19, 1967, racial tension in North Minneapolis erupted along Plymouth Avenue in a series of acts of arson, assaults, and vandalism. The violence, which lasted for three nights, is often linked with other race-related demonstrations in cities across the nation during 1967’s “long hot summer.”

In the early twentieth century, North Minneapolis was known as a place where marginalized people came together. Restrictive housing covenants prevented both Jewish and African American citizens from buying homes elsewhere in Minneapolis, so the Northside became an area where residents from different backgrounds cooperated, built friendships, and even intermarried.

After World War II, however, trust between the two groups began to erode. As overtly anti-Semitic practices declined, housing options and job opportunities opened up more readily for Jewish citizens than for African Americans, straining relationships between previously friendly neighbors.

Civil rights leader W. Harry Davis described that unrest in his 2002 autobiography. North Minneapolis in the 1960s, he stated, was no longer the quiet, isolated small city of his youth. The anger over racial inequality that bubbled to the surface in places like Los Angeles and Detroit was also present in Minneapolis. Though some scholars refer to the events as riots, others argue that they were a series of criminal activities. Many, however, use terms like “uprising” and “rebellion” that suggest a strategic response to social injustice.

The city had two major incidents of civil unrest on the Northside in the 1960s. The first, in 1966, involved looting and arson on Plymouth Avenue. Arthur Naftalin, the city’s first Jewish mayor, acknowledged the lack of opportunities for blacks in the neighborhood and promised change in response. By the summer of 1967, conditions had not improved, and black residents’ frustration was stronger than ever.

Accounts vary as to how the 1967 incidents started. Some witnesses recall the mistreatment of a black woman by police at the Aquatennial parade as the inciting event. Shortly before 11:30 p.m. on July 19, a crowd of African American citizens moved north from the parade site towards Plymouth Avenue. There, they violently protested discrimination and mistreatment by police and Jewish business owners.

Some people in the crowd vandalized, looted, and burned stores on Plymouth Avenue. There were sporadic incidents of arson, rock and bottle throwing, and assault. Someone threw Molotov cocktails at the home of a Jewish city-councilman — Minneapolis Fifth Ward Alderman Joe Greenstein.

The city dispatched police forces with riot helmets and shotguns to control the crowds and minimize the damage. While trying to put out fires, some firefighters worked under a hail of rocks and bricks thrown by gathering crowds.

By the time the violence and looting subsided early in the morning of July 20, approximately ten Plymouth Avenue stores had been vandalized. Silver’s Food Market and Knox Food Market — both Jewish-owned businesses — were completely destroyed by fires. Approximately ten people were treated at local hospitals, and thirteen African American citizens — including children — were arrested. Another round of violence ignited later that day.

In response, Mayor Naftalin asked Governor Harold LeVander for Minnesota National Guard troops to occupy the area until tensions died down. Six hundred guardsmen were called in to work in round-the-clock shifts. For over a week, 150–250 National Guard troops were stationed on Plymouth Avenue.

Additional Guardsmen were stationed in other areas in both North and South Minneapolis and in predominantly African American areas of St. Paul. The peacekeeping efforts of many Northside citizens during the demonstrations were acknowledged in some media coverage.

On July 20 and 21, violence continued sporadically on and near Plymouth Avenue before tapering off. In total, there were eighteen fires, thirty-six arrests, three shootings, twenty-four injuries, and damages totaling 4.2 million. Of the arrests that were made, at least four were of white citizens. There were no fatalities.

Throughout the three-day period, demonstrators had showed their frustration with discrimination against African Americans on the Northside. They had focused most of their anger on white authority symbols, including businesses and property. Local police received few reports of assaults on white citizens themselves.

The media generally cited newcomers and a militant minority in North Minneapolis as the cause of the violence. Some local press addressed systemic causes — including alienation and racism — and called on community leaders and policymakers to prevent future violent incidents.

Susan Marks is the author of Finding Betty Crocker: The Secret Life of America’s First Lady of Food; In the Mood for Munsingwear: Minnesota’s Claim to Underwear Fame; and Historic Photos of Minnesota. Susan has a B.A. in American history and a Master’s of Liberal Studies in American studies and film.