Arts & Culture
MNopedia
This content is shared with MinnPost by MNopedia, the digital encyclopedia created by the Minnesota Historical Society and supported by the Legacy Amendment’s Arts and Cultural Heritage Fund.
Jan. 22, 2018 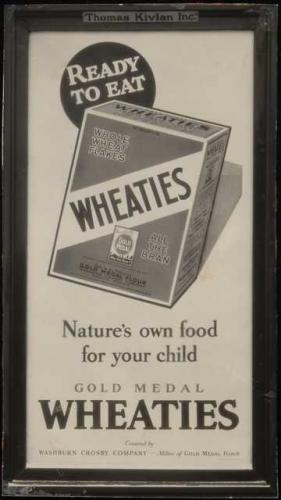 The Washburn Crosby Company first developed Wheaties in the early 1920s and introduced the product to consumers in 1924. Over time, the breakfast cereal changed the milling industry even as it helped to transform American breakfasts.

During the 1870s and 1880s, companies such as Pillsbury and Washburn-Crosby harnessed the energy produced by falling water at St. Anthony Falls to make high quality white flour. By the 1890s, they expanded the market for Minneapolis-made flour to Europe and other parts of the globe.

Minneapolis’ reputation as the flour-milling center of the world lasted into the early 1920s. Then, the hard spring wheat grown across the Northern Plains that fed the city’s mills became less dependable due to climatic shifts and plant diseases. Collapsing crop prices forced thousands of farmers to diversify. Finally, the Minneapolis millers’ energy monopoly ended with the rise of electrical power. Electricity freed mills from waterfalls and made it possible for rival companies to make flour profitably nearly anywhere.

In the early twentieth century, thousands of Americans suffered from constipation, acid reflux, indigestion, and even ulcers. Health reformers insisted that people could improve their digestive health by adding more fiber to their daily diets. Breakfast became a primary way to add more bran to one’s diet. Cold cereals made from grains doused in milk offered relief. During the early 1900s, products such as Grape Nuts and Corn Flakes started replacing meat and eggs on American tables.

Washburn Crosby’s Wheaties, introduced in 1924 as the company’s first non-flour food product, emerged as a response to these intersecting crises. Its eventual success made it a prime example of a new strategy premised on diversification and value-added processing. As the first successful cold cereal product made by a Minneapolis-based milling company, Wheaties represented an effort to expand product offerings and adapt to changing environmental contexts. It also helped transform Washburn Crosby into General Mills — one of the largest makers of packaged foods in the world.

Research on the cereal started in 1921, in response to the interest of a local sanatorium owner who accidentally dropped wheat gruel on a hot stovetop. Researchers failed, however, to develop the idea into a saleable breakfast product. Then, in 1922, James Ford Bell put miller George Cormack to work on improving the wheat flake cereal. At the same time, the company invested in a Chicago-based cereal factory.

The factory opened in 1923. Its employees drew from the process used by corn flake manufacturers and tried thirty-six different varieties of wheat in various combinations. Eventually, after multiple experiments, they created a physically uneven flake that combined cracked wheat kernels with malt syrup, sugar, and salt. The fourteenth cereal sample finally held up in taste testing and in the package.

The company first sold the product as Washburn’s Gold Medal Wheat Flakes. After an employee’s wife won a renaming contest, it called the cereal “Wheaties.” Touting the “right amount of bran” for “proper digestion” as well as the “full food value of the wheat berry” retained in the “whole wheat flake,” salesmen began selling the new product.

Sales remained flat despite Washburn Crosby’s sizable investment. The tide turned only after the company hired a Minneapolis-based barbershop quartet to sing the world’s first radio advertising jingle. On Christmas Eve, 1926, the foursome made their debut on the firm’s WCCO radio, singing: “Have you tried Wheaties? / It’s whole wheat with all of the bran.” Profits slowly began to improve locally. Once executives determined a connection between advertising and sales, the quartet’s catchy rhymes went national.

When Washburn Crosby became General Mills in 1928, the company began investing heavily in advertising all of its products. Intensive radio promotions throughout the 1930s cemented Wheaties’ popularity. General Mills advertised Wheaties during popular serial programs such as “Jack Armstrong” and “The Lone Ranger.” Most famously, Wheaties-sponsored radio broadcasts of professional baseball games cemented the product’s association with sports. Player endorsements further ensured its status as “the breakfast of champions.”

By 1941, Wheaties made up 12 percent of all breakfast cereal sales in the United States. In the years that followed, General Mills used its experience with Wheaties to develop and market innumerable other cereals even as the product became an iconic American breakfast food.

The Breakfast of Champions was invented in Minnesota