President Donald Trump’s latest executive order, which bars people from seven predominantly Muslim countries from entering the United States and suspends entry of all refugees for months, sparked a weekend of outrage and confusion, especially among Somali-Americans in Minnesota.

“This executive order has created confusion within the community,” said Abdinasir Abdulahi, a longtime immigration attorney who worked with several Somali clients on the issues over the weekend. “People who had valid visas, people who already had lawful permanent residence were detained. It was complete chaos that nobody knew what was going on.”

That was certainly true for Najib Abi and his family, one of several Somali-American families in Minnesota who came to face-to-face with that chaos over the weekend.

‘We deported your wife and kids’

On Friday, two days after the president ordered the construction of the U.S.-Mexico wall and his priorities for the deportation of undocumented immigrants, Trump signed another order that prevents people from Somalia, Syria, Iraq, Iran, Libya, Sudan and Yeman — all Muslim-majority counties — from entering the U.S. for three months.

Yet the restriction applies not only to potential refugees but also to those the U.S. security agencies have already cleared after a years-long, intense vetting process — a system that involves multiple interviews with American intelligence officials and a series of medical examinations.

The Trump administration didn’t notify hundreds of refugees and permanent residents who were scheduled to arrive over the weekend about the travel ban, creating chaos and confusion at airports nationwide as the ban came into effect.

Abi, a cultural liaison with Willmar Public Schools who spoke to MinnPost from the Detroit airport on Sunday evening, went to bed on Friday night not knowing the fate of his uncle’s wife, Binto Adan, and their 8-year-old son and 9-year-old daughter. They were scheduled to land at the Minneapolis-St. Paul International Airport at 6 a.m. on Saturday after traveling from Nairobi, Kenya, where they’d just completed the two-year-plus refugee vetting process.

Minutes before the landing, Abi and his uncle, Farah Anshur, showed up at the airport, Abi said. Three hours passed without any information of their family’s whereabouts. 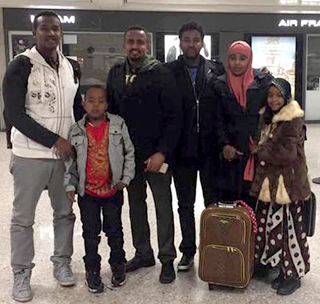 Finally at 10 a.m., Anshur’s phone rang. It was an officer from the U.S. Immigration and Customs Enforcement (ICE) — which is responsible for deporting undocumented immigrants and criminal permanent residents — calling from Dulles International Airport in Washington, D.C.

The officer told Anshur: “We deported your wife and kids.”

Confused and frustrated, Abi and Anshur didn’t know what to do next. So they drove back to Willmar. Two hours later, the officer called back — this time with different information: “We have your wife and kids,” he told Anshur. “The kids are fine. We checked their files; they are U.S. citizens [their father was a U.S. citizen at the time of their birth]. But the mom will be sent back.”

Anshur asked the officer if they could wait until he reached the Dulles Airport to see his wife before she was repatriated. The officer hung up the phone without saying a word.

‘Your wife and kids will be released’

Uncertain of how the case might end or whom they should turn to for answers, Abi and Anshur made their way to the Minneapolis-St. Paul airport again — this time to board a plane to get Adan and her two young children from Dulles.

In Washington, meanwhile, ICE officials were telling Adan to sign forms that would permit them to send her back without the children. She refused to sign, insisting she would not do anything without the presence of her husband.

By the time Anshur and Abi landed in Washington at 11 p.m. Saturday, however, a federal judge in New York had blocked the order that sought to send travelers back to their countries.

The decision by Judge Ann M. Donnelly protected 100 to 200 lawful travelers who were detained in airports across the United States — and rescued them from deportation.

Anshur’s family was one of them. Because of Donnelly’s order, Abi and Anshur received a much different message from an ICE official via voicemail when they got to Washington: “Congratulations! Your wife and kids will be released. Give us a call when you come.” 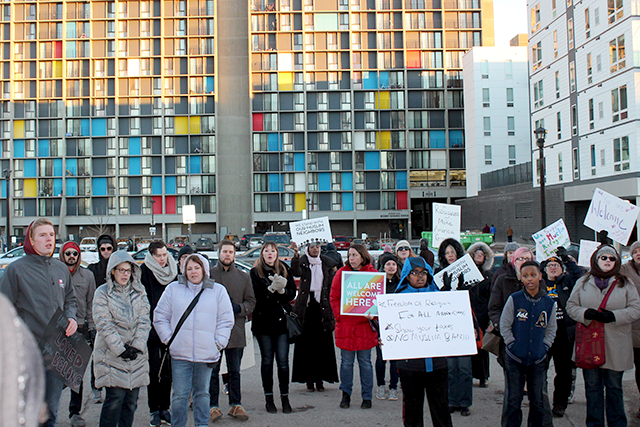 When they got to the airport, the officer greeted them and asked them to wait until some paperwork was finalized. That took another 3 three hours.

Finally, at 2 a.m. Sunday morning, the two children were reunited with their father. More than once, Adan was threatened with handcuffs and was left with her children without food or drink throughout the 20-hour airport detention, Abi said.

“When we first saw her,” Abi said of Adan, “the first thing she said was, ‘Why did you used to tell me America is a free country?’”

‘We deported your wife and kids’: One Minnesota family comes face-to-face with chaos of Trump immigration order