When Mohamed Cali lived in Somalia, he sometimes saw people blowing out candles on cakes in the Hollywood movies he watched, but he didn’t understand what the practice actually meant.

He wasn’t aware that birthdays mean so much in Western countries that people celebrate them every year — a ritual that is uncommon in the East African nation. “If you don’t celebrate your birthday every year, then it’s tough to remember it,” said Cali, founder and president of a Minneapolis-based Somali-language radio station, KALY 101.7-FM.

But then, in the early 1990s, the U.S. government extended its refugee resettlement program to displaced Somali families fleeing clan-based warfare and droughts that brought them to crowded Kenyan refugee camps.

And it was in one of these camps where Cali filled out his first application to enter the United States, which the federal government requires of refugees entering the country. He had the right answers to most of the questions on the document, except one.

“I knew the year I was born,” said Cali. “But I didn’t know the date and month. [In Somalia], nobody asks your date of birth or your home address or Social Security information to get something.”

To complete the immigration papers, a resettlement official from the United Nations gave Cali Jan. 1 as his legal birth date.

As it turns out, that date is a popular one among refugees worldwide — and in Minnesota, where Cali not only shares his official birthday with many other Somali-Americans, but with many immigrants from places that don’t typically have official birth date records, including countries in East Africa, Southeast Asia and the Middle East.

All of which is why thousands of foreign-born Minnesotans turned one year older on New Year’s day, a phenomenon now so common that it draws waves of inside jokes this time of year on social media among the state’s immigrant communities.

Somalis in Minnesota come from diverse backgrounds: Some led a nomadic lifestyle back in Somalia, where people relied mostly on a traditional calendar system for dates; others lived in big cities and towns where people used the 12-month calendar system their entire lives.

Those who came of age outside the cities are most often not familiar with their birth dates. In rural regions, where many people don’t have formal educations, people don’t use the January-December calendar system to record important dates. Instead, they use the four seasons of the year and historic national events as markers of significant dates.

“If someone was born in Abaartii Dabadheer [a major drought that took place in the ‘70s], the nomads would say he or she was born Abaartii Dabadheer,” said Abdulahi Warsame, who runs news programs at KALY radio. “Everybody gets it. And people can translate what that means into the modern calendar.” 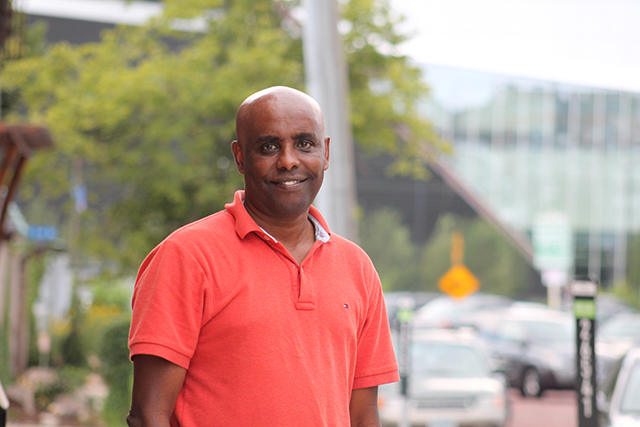 MinnPost photo by Ibrahim Hirsi
Ahmed Ismail Yusuf: “There were a few of us who had driver’s licenses or passports in Somalia. And we all had to make up birth dates on the spot to get those documents.”

In Minnesota, the Somali-Americans who fall into this category are often the community’s oldest generation, who spent the better part of their lives in a nomadic lifestyle. That often means refugee resettlement agencies in the camps assigned them estimated birth dates, which might be a couple of years older or younger than their actual birth dates.

The same is true for Afghans, Sudanese, Ethiopians and Iraqis, according to a 2013 Minnesota Law Review report that noted that more than 200,000 immigrants and refugees in the U.S. have Jan. 1 as their date of birth. “These approximated birth dates allow the government to administer benefits and track and control immigration flow,” Ross Pearson wrote in the report, “but they lack both certainty and accuracy.”

For Somalis, there are also historical reasons for the lack of accurate dates of birth. In the early 1960s — when Somalia gained its independence — more people emigrated to cities and town across the country for access to education, transportation and employment. As a result, many in the country began to rely on the Western calendar system for work and school schedules as well as for holiday vacations.

Yet the impoverished Somali government didn’t have adequate social institutions that documented birth dates or issued certificates for new babies. On top of that — like many countries in the developing world — most citizens of the country didn’t have official identification cards and driver’s licenses, said Ahmed Ismail Yusuf, author of “Somalis in Minnesota.”

“There were a few of us who had driver’s licenses or passports in Somalia,” Yusuf added. “And we all had to make up birth dates on the spot to get those documents. Everybody knew they weren’t real. Even government officials knew about that.”

In some cases, though, parents kept personal files and photos of their children’s births. Others kept archives of radio announcements, which has long been common in the country when a couple gets married or a child is born.

But when the civil war broke out in 1991, many families — like Cali’s — lost those documents as they crossed oceans or walked for weeks to find stability in neighboring countries. “Nobody was concerned about IDs or birth information,” Cali said. “People were in survival mode. They didn’t have the luxury to talk about when they were born. They were busy working to stay alive.”

Today, however, young people in Minnesota’s Somali-American community pay as much attention to birthday celebrations as their non-Somali counterparts.

Yusuf, who has a 10-year-old U.S.-born son, said his child never misses a birthday.

“The kids and their parents live in two completely different worlds,” he said. “My son counts down to his birthday every single year. Many years back, I used to laugh at him when I heard him or other people talk about birthday parties or celebrations.”

Cali, whose children were also born in the U.S., said his kids also celebrate their birthdays — and he celebrates with them: He takes them out to eat and buys them gifts. “I still get confused about their dates,” he said of his eight kids, who were mostly born in March, April and May. “The only way I can remember is to look at their documents.”

And today, the combination of America’s preoccupation with celebrations and the commonality of Jan. 1 birthdays has led to a predictable phenomenon. The first day of each year, messages poking fun at Somali-Americans with New Year’s Day birthdays blanket Facebook and Twitter feeds.

As one Twitter commenter noted Sunday: “Happy birthday to every Somali on earth.”