Minnesota immigration advocates and residents affected by the Trump administration’s decision to end the Deferred Action for Childhood Arrivals program, known as DACA, are vowing to resist the controversial move.

Morales, whose Mexico-born parents came the U.S. when she was 2 years old, is among more than approximately 6,000 Minnesotans enrolled in DACA program, a group known as Dreamers.

Created in 2012 by former President Barack Obama, DACA let people like Morales — undocumented immigrants who were brought to the U.S. as children — get work permits and receive temporary but renewable protection from deportation. Dreamers are also eligible for drivers’ licenses, state health insurance as well as limited ability to travel for humanitarian and educational purposes.

It was because of DACA that Morales was able to drive legally and get a job with the faith-based organizing coalition ISAIAH three years ago — both of which have been key to allowing her provide her and her family with a good life, she says.

All of that is now up in the air. On Tuesday, U.S. Attorney General Jeff Sessions announced that the Trump administration is ending the DACA program as of March 5, 2018. The federal government will not process new DACA applications received after Tuesday, and unless Congress passes legislation that would allow DACA recipients to keep their status or become permanent residents, Morales and the 800,000 other DACA recipients nationwide will start losing protections on March 6. Among other things, after that date DACA recipients would no longer be able to be lawfully employed and would be subject to deportation. (Recipients already enrolled in DACA who renew their enrollment before the deadline will be able to work for up to two more years, however.)

‘American in every single way’

Now Dreamers and their advocates are planning to do whatever they can to see that Congress acts. At a gathering at the Minnesota State Capitol Tuesday, Juventino Meza, a DACA recipient and student at Mitchell Hamline Law School in St. Paul, said that leaders of his community are prepared to work with both Democrat and Republican officials to address the issue. “As we think about what comes next,” he said, “we want Congress to pass a bill that recognizes the complexity of the issue and creates a permanent solution, not only for DACA holders but for the 11 million undocumented immigrants.”

At the Minneapolis rally Tuesday night, Morales echoed a similar sentiment, telling the crowd to challenge their representatives and push them to legislate a plan to put Dreamers on a path to citizenship. “Taking away DACA is not a popular thing in this country,” she said. “A minority wants this in this country. So we need to start speaking out.” 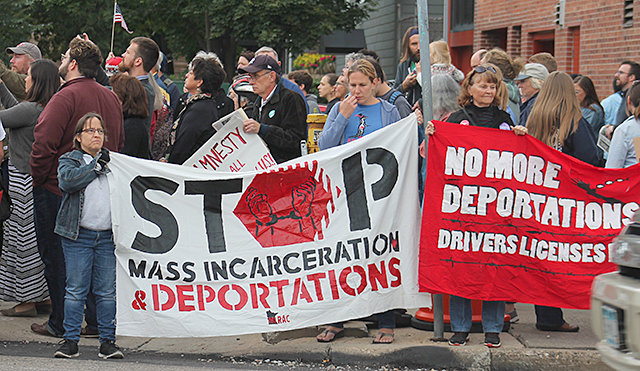 David Soto, a DACA recipient, said he plans to “mobilize with the rest of the Dreamers” to save the program, which protected him from deportation five years ago. “I will definitely speak out more,” he said. “I know that I won’t just pick up my bags and leave; not without a fight.”

Like many Dreamers, the U.S. is the only country Soto has ever really known. He was 6 years old in 1992, when he and his older brother were smuggled into the U.S. from Mexico to join their parents. In 2008, Soto’s father was deported, and Soto himself was detained by U.S. Immigration and Customs Enforcement (ICE) for 45 days because of his own immigration status.

He was able to get out of detainment, after he agreed to regularly report to ICE officials, attend court hearings and renew his work permit. During that same period, Soto put himself through college, where he graduated with a two-year degree.

After the Obama administration authorized the DACA program in 2012, Soto was no longer subject to deportation proceedings and soon got a drivers license and found a job as a financial consultant at Comunidades Latinas Unidas en Servicio, a Minneapolis-based nonprofit serving the Latino community.

“Once DACA happened, I could actually see my future,” Soto said. “That was really the first time I thought about my future — going back to school, investing more in my career, planning for my future, buying a house and creating a retirement account.” 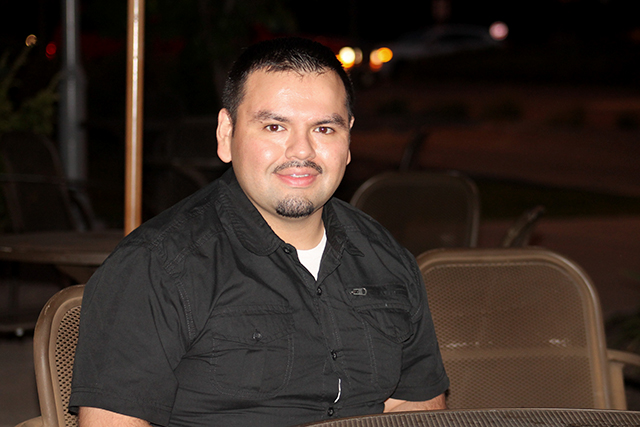 MinnPost photo by Ibrahim Hirsi
David Soto, a DACA recipient, said he plans to “mobilize with the rest of the Dreamers” to save the program, which protected him from deportation five years ago.

Like Soto, thousands of people across Minnesota were able to plan for their future because of DACA, said Sandra Feist, a Minneapolis immigration attorney. Today, many of her Dreamer clients are pursuing higher education degrees in science and engineering, while others have regular jobs to support their family.

“They lived in this country and grew up in our community,” she said. “There’s no difference between a DACA kid and my niece. They have the same worldview; they have the same life experience; they’re American in every single way, except they were born in another country.”

The decision by the Trump administration leaves many of them open to deportation, however, a reality that’s stirred up fear and uncertainty among immigrant communities throughout the state.

Mitch Roldan, who co-founded the Spanish-language podcast Hablando Franco, said that frustration has been visible in the community since the news about the possible end of the DACA program resurfaced last week. “We obviously feel that fear,” he said. “But I’m hearing from our leaders, who are also Dreamers, to not give into that fear, to continue to fight and do everything we can to push back against this.” 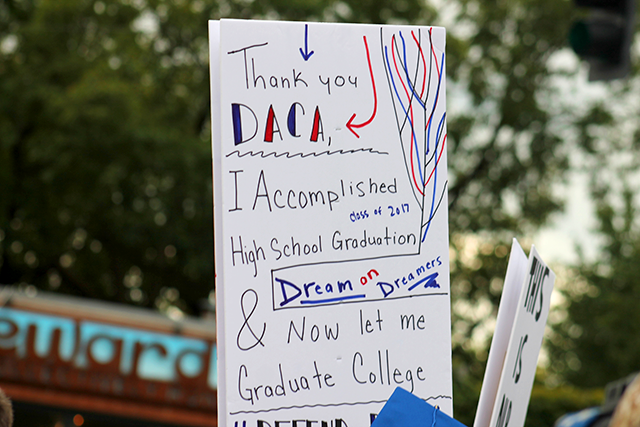 MinnPost photo by Ibrahim Hirsi
One of the signs at the Tuesday night DACA rally in Minneapolis.

For some, that resistance means pressuring elected officials to come up with a permanent solution for DACA recipients. For others, it means participating in demonstrations and raising awareness about the challenges facing the undocumented immigrant community.

For Roldan, it means all of the above. “That fight right now is letting our congresspeople know what’s going on and doing everything we can to support people that we know have DACA,” he said. “It’s supporting them emotionally, helping raise their voice and giving them a platform to share their stories.”