Ever since Omar Fateh announced his run for a state legislative seat last December, he’s been taking note of a recurring experience on the campaign trail: It’s easy, at first glance, to mistake him for an immigrant or a refugee from Somalia.

But when people hear him speak, they realize something different about him. “A lot of times,” he said, “they say, ‘It’s interesting because you don’t have an accent.’ ”

Each time Fateh comes across these individuals — and he often does during campaign events or phone conversations with constituents — Fateh uses the moment as an opportunity to walk them through his family history.

He tells them about how his Somali-born parents immigrated to the U.S. in the 1960s and 1970s; how the couple then got married in New York City; and how they eventually gave birth to him in Washington, D.C., 28 years ago.

Even then, Fateh is quick to say that he doesn’t take issue with questions about his identity and that he is, in fact, proud of his Somali heritage.

But the reason voters assume he’s a refugee has a lot to do with the immigration experiences of the Somali candidates who have come before him. While there have been dozens of Somali-American politicians who have run — and won — political offices in cities and towns across Minnesota in the past two decades, not a single one of them was born in America.

The same is true for a half dozen Somali-Americans whose names will appear on an election ballot in Minnesota this year, including two other candidates vying for the same District 62A state House seat that Fateh is.

Fateh’s experience, as a U.S.-born Somali-American, represents something of a milestone for the Somali-American community in Minnesota — the emergence of a second generation of leaders — even as it reprises a familiar story, a path taken by the German, Scandinavian, Eastern European and Southeast Asian refugees who came to Minnesota before them.

‘They’re coming into their own’

Fateh’s candidacy may be new, but some young Somali-Americans of his generation have been visible in professional careers and in leadership roles for some years now. Mohamud Mohamed, Minneapolis-born organizer and senior at Augsburg University, has also taken note of more and more individuals from his generation taking part in efforts to improve themselves and their communities in the Twin Cities and beyond.

It’s an effort that has been in the making since the first waves of Somali refugees started to arrive in Minnesota in 1991, when the civil war erupted in the East African country.

During the first decades of their presence in the state, the older generation of Somali immigrants were in survival mode, focused on establishing the essentials of creating a new community. So they built small businesses that carried traditional clothes and familiar groceries; nonprofit organizations that guided and served newcomers; and worship places and charter schools that preserved their culture and religion. 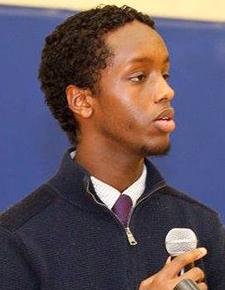 Then in the early 2000s, the community started to get involved in local and state politics as volunteers and policy aides for elected officials and candidates. Their role was mainly to get the few members of the community who had become U.S. citizens to vote.

Meanwhile, the children who were brought to Minnesota as infants or those born in the U.S. — like Fateh and Mohamed — in the 1990s and 2000s are now in their late teens or 20s.

Today, most of the Somali community’s political candidates, mosque leaders, charter school administrators and nonprofit leaders remain predominantly older men, who came to the U.S. in their 30s and 40s some decades ago.

But those who were born after the first wave of Somalis came to the U.S. in the early 1990s  are becoming increasingly visible in certain neighborhoods in the Twin Cities. They’re playing influential roles in promoting social justice, leading student associations in colleges or opposing initiatives they deem harmful.

In 2016, for example, a group of young generation Somali-American activists successfully blocked the filming of an HBO series — “The Recruiters” — in the Cedar Riverside neighborhood in Minneapolis because they didn’t want another narrative that depicted their community as a recruiting ground for terrorists.

They’ve also been vocal against the controversial Countering Violent Extremism program, which the U.S. federal government says is meant to prevent young people from joining groups like ISIS or al-Shabaab. Many young activists, conversely, have said that CVE was created for profiling and surveillance of Muslims.

The young generation of Somali-Americans has also been active in Black Lives Matter protests and other social justice efforts in a way that their parents never were.

The political participation of people like Fateh also aims to shift a longstanding narrative about younger Somali-Americans, from that of generation struggling between their American and Somali identities to that of leaders working to improve their communities and bridging the cultural gap between the older Somalis and their American neighbors.

That’s the reason Mohamed and many other U.S.-born and U.S.-raised Somali-Americans have been supporting him,  Fateh says. “I’m showing them my criminal justice reform and my racial justice platform,” he said. “I tell them we can turn things around. I’ve had a lot of young Somalis, that never voted, that said, ‘I’ll come and vote for you.’ ”

The story of the second-generation Somali-Americans rising to political leadership and activism is similar to those of previous immigrant communities, including the Scandinavian immigrants and the Southeast Asian refugees.

When Scandinavians first came to Minnesota, said Klas Bergman, Swedish-American journalist and author of “Scandinavians in the State House: How Nordic Immigrants Shaped Minnesota Politics,” it was leaders who were born overseas who first got involved in the local and state politics.

“First, they started in local levels,” Bergman said. “Then they set their sights high and started running for the seats in the Legislature and then eventually for governor at the end of 19th century.”

Among the European immigrants who held high-profile offices in Minnesota were Sweden-born Eric G. Hoyer and Scotland-born James Gray, both of whom served as mayors of Minneapolis in the 1900s.

Further, Norway-born Knute Nelson, Sweden-born John Lind and Adolph Olson Eberhart and Denmark-born Hjalmar Petersen all served as governors of Minnesota in the 19th and the 20th centuries.

“The foreign-born generation can only carry the flag so far,” Bergman said. “Then the newer generation, they have to take over. If that’s the case for the Somali-American community, I’d say that’s a very encouraging sign.” 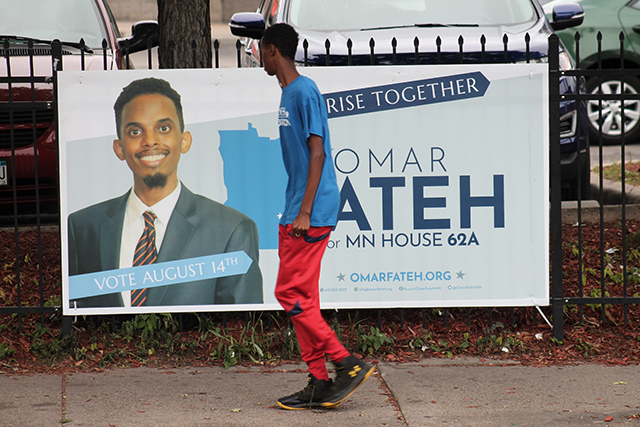 MinnPost photo by Ibrahim Hirsi
The story of the second-generation Somali-Americans rising to political leadership and activism is similar to those of previous immigrant communities.

That’s also a familiar story among the Hmong community, which emerged in Minnesota in the 1970s. In the first one or two decades of the community’s presence here, said state Rep. Fue Lee, most of the people in the leadership roles in the community were born and raised overseas.

In the last two decades or so, however, Lee said that a growing number of second-generation Hmong-Americans — people like him — have been taking on significant leadership roles in politics and in community activism.

“They’re getting involved because they want to see a change in their community,” Lee said. “I think it’s healthy for our democracy to see young people who want to organize and talk to people about everyday issues they’re facing.”

From D.C. to Minnesota

That sentiment is what led Fateh to run for a seat in the state Legislature. Though he’s new to the political scene in Minnesota, Fateh isn’t new to politics. In 1993, his family moved from Washington, D.C., to a Virginia suburb, where he and his six siblings came of age. As a college student, Fateh interned with local and federal political offices in Virginia and D.C. — among them New York’s DFL Sen. Chuck Schumer.

During that campaign, Fateh visited family members and friends in Minneapolis several times for fundraising efforts. But when he lost the bid, some people told him Minnesota had better opportunities for aspiring politicians.

‘The Somali without the accent’

In the three years he’s lived and worked in Minnesota, Fateh recognized some main differences between Somali-Americans here and their counterparts in Virginia. First, most of the Somali-Americans in the D.C.-area have lived there between three and five decades.

Some ended up there as diplomats of the Somali government that was in power before the civil war in 1991. Others settled there after completing higher education in the U.S. or serving in the Somali Embassy in D.C.

Some years later, Mahmood met Amina Ali — who arrived in the U.S. in the 1970s — in New York City, where the couple got married and eventually ended up in the D.C. area. The couple had six children together, including Fateh.

“You’re not going to see new immigrant Somalis there,” Fateh said. “A lot of them immigrated at a very young age. A large number of the older generation went to college in America. Some of them even went to high school in America.”

“They’re a lot more established than Somalis in Minnesota,” he added. “They have been working in the area for the last 20, 30 years. The language-barrier issue is not an issue in Virginia, for the most part.”

Fateh added that even though he grew up with other children of immigrant parents from Pakistan, Ethiopia and Vietnam, they all saw themselves as Americans first.

That isn’t what he sees in Minnesota, though. The majority of those living in here, he said, saw themselves as Somalis first — even if they were born in the U.S. — and have a better sense of the Somali culture and language than those in the D.C.-area.

Despite all of that, Fateh says he is often viewed as a Somali immigrant when he reaches out to constituents about their issues and what he hopes to do if he’s elected for the seat. Then when he starts talking, the conversation often becomes more about his accent and place of birth.

“These days,” Fateh said with a laugh, “they call me ‘the Somali without the accent.’ ”

Rising to leadership: How second-generation Somali-Americans are coming into their own in Minnesota