In 2013, Dr. Ayaz Virji moved his family from Harrisburg, Pennsylvania, where he had been working in a large hospital, to Dawson, Minnesota – one of many towns across rural America that was in desperate need of a physician.

Virji wanted to work in a more personal setting, and his family quickly took to the Lac qui Parle County town of 1,400. Besides his work at the local health center, Virji opened a side business, a bariatric clinic, while his wife, Musarrat, started a spa. Their three children made friends and got involved in activities at school.

As the only Muslims in town, however, they also experienced some tension a few years later after the election of President Donald Trump, whose campaign included a proposed moratorium on Muslim immigration into the United States.

Virji tells his story in “Love Thy Neighbor: A Muslim Doctor’s Struggle for Home in Rural America,” which recounts his experience in Dawson and – central to the book – summarizes an interfaith lecture that he and a Lutheran pastor have been presenting in towns across Minnesota and a few other states.

Seven years after arriving in Minnesota, Virji continues to work in Dawson – though he now also works part-time in the United Arab Emirates. His next lecture in Minnesota is slated for March 10 in Marshall.

Recently, MinnPost and Virji had the following email exchange, which has been lightly edited for clarity:

MinnPost: Why did you write this book? After all, you seem to be plenty busy.

Ayaz Virji: [I had] no intention of writing a book about this. After the Washington Post story [a 2017 feature on Virji’s experience in Dawson] broke, I was contacted by a book agent in New York about the idea. I was originally skeptical, but he made a valid argument. He said I can’t just keep doing the lectures forever; a book will broaden my reach and actually save me a lot of time in getting the word out. It has!

MP: Before you even wrote your book, you began speaking to various groups – along with an ELCA pastor – about Islam and Christianity. What kind of reception have you gotten at these public events?

AV: Mixed. There are always supporters. But there are always people who come not with an open mind, but to convert me. I never know what the mix will end up being until after the talk. I will say that the more talks we do, the greater the percentage of supporters in the crowd seems.

MP: In “Love Thy Neighbor,” you recount an interaction with a friend [Doug] who tells you that he voted for Trump because he was frustrated with the cost of his health care. You aren’t satisfied with that answer, but the scene ends with you inviting your friend to your house. How have interactions like that shaped your views about Trump supporters?

AV: Like my friend Doug, most Trump supporters have been conned. They followed their emotions and the hysteria around a “reality TV” personality instead of following their God-given, beautiful minds. Like Doug, when you bring someone like him back to the truth – Trump’s six bankruptcies, a fake university, “I like my war heroes who haven’t been caught,” making fun of (the) disabled, a fraudulent charity, [a] $2.7 trillion worsening national debt – and back to reality – Doug’s health-care coverage issues have worsened and his health-care debt (has become) greater over the last three years than ever before – they eventually turn.

MP: Your book is not only about the aftermath of Trump’s election. It is also a reflection on what it is like to live as a Muslim of Indian descent in a small town that is full of people who are largely Christian and white. As you look to the future, do you see ethnic and/or religious diversity flourishing in such places? 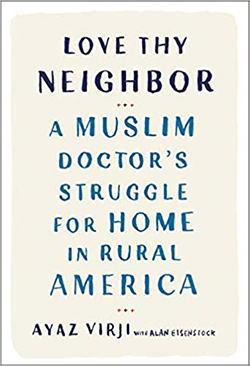 AV: My suspicion is that things will get worse before they get better regarding minority acceptance, particularly in Southern (United States) rural communities. But they will get better. Truth will always win over falsehood. The world is so much better because of our differences. It is a chaotic and beautiful truth! Case-in-point: My life is so much better because of the inspiration of a white, female, Christian pastor who fought injustice head-on, even when she had no stake in the game.

MP: While you continue to work at the medical center in Dawson, you also have begun working for New York University at its campus in Abu Dhabi, in the United Arab Emirates. Why did you accept that position?

AV: The offer from NYU Abu Dhabi came as a surprise. NYU as a university and Abu Dhabi as a city embody the values of wisdom, diversity, inclusion, and equity that I want to stand for. It became an unexpected, but welcomed, turn in the story for my family and me. Both Musarrat and I have strong family ties in nearby Dubai, which further sealed the deal. We now get the best of both worlds: Dawson, Minnesota, and Abu Dhabi, United Arab Emirates. How crazy, but amazing!

MP: Your book ends on a hopeful note about your experience in Dawson. You still own your house there. Yet, ultimately, your family moved to the UAE. Why?

AV: We moved to Abu Dhabi specifically for the position at NYU and to be close to family. When people ask me, “Where do you call home?” the answer is still “Dawson, Minnesota.” I don’t see that answer changing anytime soon. I still work at the hospital there, albeit on a part-time basis, and Musarrat still runs her local spa on Main Street.