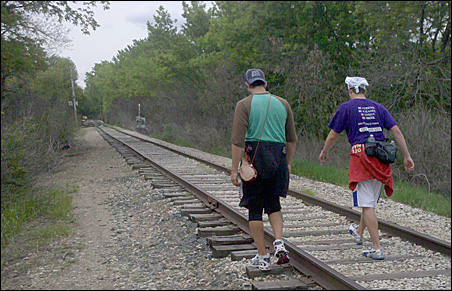 Photo by Brett K. Anderson
Tom Williams and Matt Schmidt hike on tracks north of Faribault, Minn. According to Brett K. Anderson, who took this photo: “Google Maps mistakenly led us on the tracks and we just went with it!”

In the 1960s, sit-ins were the protest de jour for college students, civil-rights advocates and anti-war activists.

Four students from Minnesota State University Mankato are making news with what might be described as a “walk-in.” Last Friday, the 20-somethings began a 100-mile hike from Mankato to the State Capitol.

Even though they limped in a few hours after Monday’s close of the 2010 legislative session, they managed to meet with a few sleep-deprived legislators as well as gubernatorial candidate Mark Dayton. The students’ agenda: relief from state funding cutbacks, which they say have led to double-digit tuition hikes, reduced state grants, rising student debt, 80 faculty layoffs on their campus and crowded classes.

Theirs is a made-for-TV news story and it appears every Twin Cities station has interviewed them. Your humble blogger caught up by phone with a tired, blistered Tom Williams, president of the Minnesota State Student Association (MSSA).

The continuing state cutbacks have “put a chokehold on higher education,” he said, “and I think they (legislators, candidates) understand where students are coming from.”

A challenge and an invitation
The young men, all involved in student government, issued a challenge before the trek: If they walked 100 miles to the Capitol, gubernatorial candidates would be expected at a fall open forum on the “current and future status of higher education,” said Williams, a 22-year-old fifth-year senior.

The students don’t expect their elders to hoof it to Mankato, although the spectacle surely would attract reporters and cameras.

Senate Minority Leader Dave Senjem, R-Rochester, seemed the “most positive” about the invitation to the forum, although Dayton also plans to attend, Williams said. “Sen. Senjem said, ‘You walked from Mankato to St. Paul. The least we can do is come down for an open forum.’ ”

So, would Williams make the trek again? 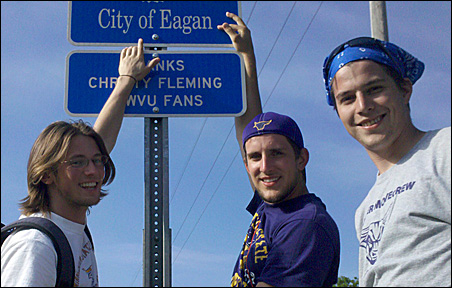 Photo by Brett K. Anderson
Left to right: Dan Kromer, Tom Williams and Matt Schmidt are still standing after arriving in Eagan on their 100-mile walk to the Capitol for higher education. The fourth walker, Brett K. Anderson, took photos on his cell phone along the way.

“If need be, I’d probably put in another 100 miles for higher education,” said Williams, a secondary-education and social-studies major. “Being an education major, I think it’s a pretty important value. We have discussed a tradition that (student association) officers should do the walk after they’re elected.”

Joining Williams on the walk-in were:

Between achy hips and knees and 20 blisters counted on four pairs of swollen feet, they will not walk back to campus. 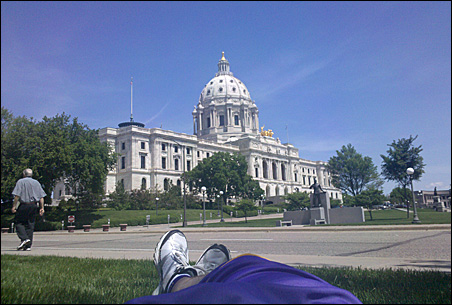