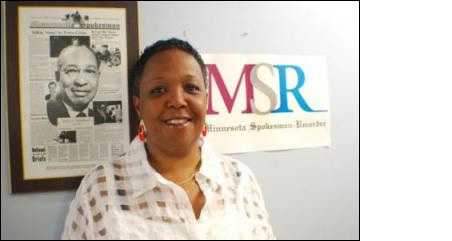 Photo by Trang Do
Tracey Williams, president and publisher of the Minnesota Spokesman-Recorder

“When [the government] can do things without being reported, they can get away with it. We ask, is money being put out there? Where is it being spent? Are African-Americans being included?” Tracey Williams, publisher and president of the Minnesota Spokesman-Recorder described the paper’s continuing mission, as it celebrates 75 years of publishing.

Over its 75 years, writers from the Minnesota Spokesman-Recorder have racked up a number of awards for their coverage of a diversity of issues. The awards decorate the main entrance to their modest offices in Minneapolis’s Powderhorn neighborhood. The newspaper picks up the ball that other, “mainstream” media outlets have dropped, using solid journalism and helping to mobilize Minnesota’s African-American communities around issues and events that would otherwise go unnoticed until too late.

The paper does more than serve as an eagle-eyed watchman. Again, picking up where the mainstream media fails African-American communities, Williams described in an interview what she sees as the Spokesman-Recorder’s other mission to “highlight the achievements of the race” in Minnesota.

Williams herself has been with the paper since the tender age of eight, when she worked the Addressograph machine in the publishing department, making the plates which were used to print addresses on papers for delivery. The Spokesman-Recorder was a fixture in the Minneapolis African-American community by then — her grandfather, Cecil Newman, had founded both the paper’s predecessors in 1933 (The Minneapolis Spokesman and the Saint Paul Recorder merged in 2000).

Newman was a member of the highly respected Brotherhood of Sleeping-Car Porters, a union that made major strides against segregation in the 1930s and 40s, before the modern Civil Rights Movement.

Newman, she said, “knew the value of news, the value of having a voice with a media outlet that could make change.”

Williams attributes the paper’s longevity and success, when most other African-American newspapers in Minnesota have failed, to its grassroots connections to the readership. In addition to many highly placed sources such as Matt Little, who contributes a column tracking legislation that impacts the African-American community, “there are pioneers in the community who want to keep you informed,” Williams said.

KMSP (Fox 9 News) anchor and media observer Robyne Robinson, agreed. In an email, she added that the Spokesman-Recorder’s longevity has granted it the status of an opinion leader in the Minnesota African-American community. The paper’s “web presence is a start in working as pushing the black community in new directions.”

The Spokesman-Recorder itself may be headed in new directions. While its print circulation remains strong and a source of news to “put your teeth around,” according to Williams, a growing media reform movement is trying to change how journalism is done in this country. Many advocates try to include so-called ethnic media, such as the Spokesman-Recorder, in their movement, but as Loris Ann Taylor, exectutive director of Native Public Media, said at the June 4-6 National Conference on Media Reform, the movement is still very much focused on traditional, white politics and issues. Without minority voices and concerns in the movement, Taylor said, “there will be no real media reform.”

Asked about her future goals for the Spokesman-Recorder, Williams was cool to the prospect of reforming media, “Media reform just doesn’t pick up on issues so drilled into our community,” she said.

She said she’d rather the paper get “national recognition as a source for journalism on a local scale, done right. If you want a model, look to the Minnesota Spokesman-Recorder.” She hoped, she said, that the paper would continue to be a “change vehicle” that would “write the rights and right the wrongs.”

James Sanna is a freelance writer and an intern at the Daily Planet.

Nellie Stone Johnson, black activist, grew up on a farm in Pine County, Minnesota. Hers was the only black family that lived in the area. Early on, she learned from her father, that education is valuable and that organizing around an issue can be an empowering force. All her life, Nellie advocated for equal opportunities in education, the work force, and health care issues.

She told her life story in Nellie Stone Johnson, the Life of an Activist (As told to David Brauer. First published in 2000 by the Ruminator Press.) In this oral history, she speaks about the early days of the Minnesota Spokesman-Recorder:

“It wasn’t the Minneapolis Spokesman yet. The owner of the paper [Cecil Newman, of the Brotherhood of Sleeping Car Porters] was a union member and was very dedicated to Trade Unionism. …

“It was the number one paper for years. But nothing ever since 1933-34 was equal to the Spokesman in bringing the real story to the people.”