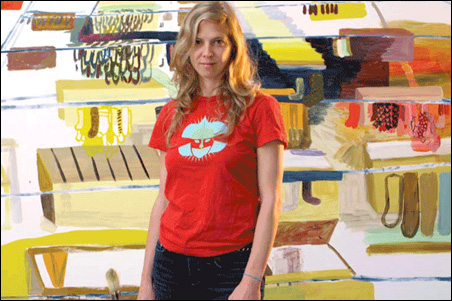 Photo by Tim Davis
The New York Times has described Lisa Sanditz’s landscapes as “immensely appealing.” Her husband took this photo of her and one of her paintings.

Lisa Sanditz is only 13 years out of Macalester College — seven if you count from the completion of her MFA from the Pratt Institute in Brooklyn — but she has already had solo exhibits on both U.S. coasts as well as in Brussels, and was recently profiled in Smithsonian magazine.

The New York Times called her landscapes “immensely appealing and extremely well done in a way that grabs your attention.”

She does the occasional gig as a visiting artist but holds no day job to support her painting. She declined to say what her work sells for, but offered, “You can say I’m supporting myself doing it, and I don’t live in a cardboard box.” If you happened to drive down Canal Street in Manhattan three years ago, you may have seen a reproduction of her painting “Tie-Dye in the Wilderness” on a billboard as part of a juried project by Creative Time, a nonprofit that brings public art to New York City. Sanditz seems mildly astonished at her success. “The art market is saturated. There are a lot of good painters out there working hard, and I feel fortunate and grateful.”

Not that she hasn’t paid her dues. A St. Louis native, she studied at Macalester, then moved to San Francisco after graduation with a couple of Mac friends. In San Francisco she had “a million odd jobs,” including gigs painting murals. Then, eager to explore her own artistic vision, she crossed the country to attend graduate school at Pratt and “spent those two years really working in my studio, and developing work on the American landscape, work I’ve been doing ever since.”

The daughter and granddaughter of art museum docents, Sanditz is well versed in the traditions of landscape painting. But she has somehow made the genre her own, bringing the beautiful and the ugly together. “The sublime factors into it where the built environment and the natural environment are most agitated,” she says. “I did a painting of the Bingham Canyon open-pit copper mine in Utah, where the topography is so deeply scarred and altered to accommodate human use — it’s spectacular.”

In the last two years, Sanditz has turned to China, touring the southeast coast for most of a month. “I was reading about the U.S.– China economic relationship and how much China was changing to accommodate our import economy, and how there are things in the landscape that had never been there before, like billboards and highways. It was a way to personalize the experience of using products that come from so far away. I went to the places where underwear is made to see what it was like to trace that consumer cycle.”

One of the most interesting industries, she found, was pearl farming. “I did a number of paintings of pearl farms in China, which are flooded fields that are about six feet deep with water. There are rows of plastic bottles organized in these fields, for miles in every direction. Attached to each plastic bottle is a string, and attached to the string underwater is an oyster with a pearl growing in it. There’s a grid of trash where these semiprecious items are grown. There is a particular challenge to this new work from China, because the signifiers that are familiar to us from the American landscape do not translate.”

Once she picks up the brush, the painting comes fast and furious. “It’s a little bit of an attack when it happens. I do a lot of preparatory sketching with watercolors or acrylic on paper, and reading about the subject matter, and looking at photographs I’ve taken. It might take me a month to do a painting, but completing the actual painting might take only four days.”

She has no regrets about choosing Macalester over an art school. “I wanted to study liberal arts while I studied studio art. It was a constant stream of ideas and discussions with interesting people in different disciplines.” Of her art professors, she was most influenced by the late Gabriele Ellertson. “I loved how tough she was. I appreciated the rigorous art curriculum and discourse. And Ruthann Godollei was both a great teacher and a great role model, as an artist really working in the field.”

Until this month, Sanditz is painting in Italy, where her husband, photographer Tim Davis, has a yearlong fellowship at the American Academy in Rome. She recently received a Guggenheim Fellowship to return to China to further her body of work inspired by the China less-traveled. Noting that she grew up familiar with suburbs, strip malls, and housing developments, she says, “I’ve always been attracted to places that are a little bit under the radar.”

Jan Shaw-Flamm is a member of the College Relations staff at Macalester College and a regular contributor to Macalester Today.