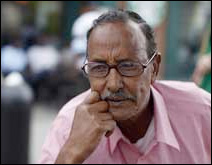 Photo by Maranda Gorr-Diaz
Somali immigrant Ali Abdulrahman immigrated to Cedar Riverside five years ago. He enjoys drinking coffee and talking about politics with other Somali men at the neighborhood Starbucks.

In the heart of Minneapolis on Riverside Avenue, Somali men gather on the white plastic chairs outside Starbucks. The strong aroma of freshly made coffee hovers around them. Mohamoud Hassan publicizes his upcoming soccer tournament, in which he’ll be a coach. Abahualah Tama explains the security he feels living here: “Home is where you feel safe. I feel safe in Minnesota.”

Just a few blocks away, Eve MacLeish spins her favorite Latino music when she hosts one of KFAI Radio’s many multicultural shows. The station broadcasts in 12 languages, including Spanish, Hmong and Somali.

The Twin Cities have changed significantly over the past 35 years, with wave after wave of immigrants transforming everything from schools to restaurants, churches to sports tournaments. We are living in a new age of diversity.

“I grew up in a great city called Minneapolis,” said Mayor R.T. Rybak, “but it was not as great as it is today, in large part because we were too isolated in this big world.”

Immigrants have come here for a variety of reasons. They came from Vietnam, Laos and Cambodia after the Vietnam War. They came from Ethiopia fleeing famine. They came from Liberia during a civil war there. In the late 1990s, they came from Somalia as that country fell into chaos. And they continue to come from Central and South America and Mexico in search of jobs and a better life.

Immigrants have come to the Twin Cities area for the job opportunities and because agencies like Lutheran Social Services and Catholic Charities have been here to help them.

The cumulative effect has been dramatic. In the seven-county metro area in 2007, more than 125,000 residents were Latino, nearly 45,000 were Hmong, and an estimated 30,000 were Somali, said Barbara Ronningen, a demographer with the Minnesota State Demographic Center.

“There are clear challenges with diversity, but much more importantly, there are phenomenal opportunities,” Rybak said.

These challenges include misunderstandings fostered by language barriers and differences in cultures and values. In schools, there are fights between students of different ethnicities.

Mayor Chris Coleman of St. Paul thinks it’s important to “close the gap” in language skills and graduation rates between Americans and immigrants, so that communities have people who are capable of competing in a high-tech global market.

However, both Rybak and Coleman believe the economic and cultural benefits outweigh the negatives. Many immigrants have small businesses, especially restaurants, which Coleman thinks is great for the economy because the money spent at those businesses stays in the city. These small restaurants provide unique foods and an opportunity to experience different cultures. Ethnic diversity also attracts tourists to the city, another economic benefit, Coleman said.

The Cedar Riverside neighborhood of Minneapolis is a prime example of the change the Twin Cities has gone through in the past 100 years. In the late 1890s it was a thriving Scandinavian community. In the 1960s and 1970s, it became an artistic neighborhood with a large population of hippies. Now it’s home to a Somali community that arrived here during the mid-1990s.

How does this cultural change affect our daily lives? You may attend a performance of traditional Hmong music. Your kid’s best friend may be Somali or Liberian. You may get your weekly groceries at an Asian grocery store. At a restaurant, your server may be Latino. Your neighborhood may have people from five continents. It’s a long way from your grandmother’s Twin Cities.