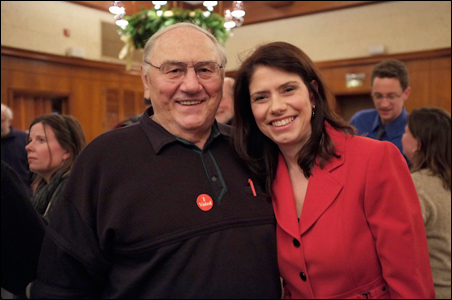 She narrowly defeated Somali candidate Mohamud Noor, who had a strong showing, particularly in the Cedar-Riverside neighborhood.

With the DFL’s strong history of winning in Senate District 59, Dziedzic is expected to fare well in the Jan. 10 special election against Republican Ben Schwanke. She is the daughter of former Minneapolis City Council and Park Board member Walter Dziedzic.

In the five-way DFL primary, Noor finished, 6 points behind. He was hoping to become the first Somali native to win a seat in the Legislature.

Noor, who had very strong backing from the Somali community, garnered 95 percent of the votes in a precinct in the Cedar-Riverside area, where many from the African national now live. He also was endorsed by the Minneapolis Federation of Teachers, the Minnesota Association of Professional Employees, Take Action Minnesota and Stonewall DFL, the party’s gay-rights caucus.

Also in the race were Peter  Wagenius, who finished third with 1,089 votes; Paul Ostrow, fourth with 792; and Jacob Frey, fifth, with 473. Alicia Frosch, who had withdrawn from the race but remained on the ballot, drew 36 votes.

In another legislative primary, in House District 61B, Susan Allen easily won the DFL primary in the race to replace Jeff Hayden, who’d won an earlier special election for an open state Senate seat. Allen will face independent Nathan Blumenshine in the Jan. 10 general election.