The prosperous and nap-filled reign of Robert Tufts as mayor of Dorset, Minn., may be coming to an end.

It appears he’s not campaigning hard for reelection on Aug. 3, even though his two one-year terms in the ceremonial position has brought more publicity to the tiny north-central Minnesota burg than you could shake a plastic t-ball bat at.

Mayor Bobby, as he’s known, is only 5 years old.

And the constant pressure of being “on” and making appearances and smiling and answering silly questions from reporters can take a toll.

Actually, the pressure doesn’t seem to bother young Bobby. He’s a resilient preschooler with the upbeat and polite demeanor of a budding politician. Even a broken wrist, incurred while helping dad fix a three-wheeler, doesn’t slow down this promoter.

“It’s fun,” Bobby said of the job. “They give me ice cream [at the Dorset House restaurant]. I get to eat whatever I want.”

No, the toll might not be as tough on on Bobby as it is on his family, and on his mom, Emma Tufts, who’s his chief-of-staff, appointments manager, chauffeur, and, as it turns out, head bottle washer. (She’s got a 2-year-old, too.)

“Don’t get me wrong, it’s been great,” Emma said. “But it might be time to take a little break.”

She smiled at Bobby, and said quietly: “He thinks he’s running, but I don’t know if I have it in me.”

I interviewed the mayor and first mom earlier this summer during the town’s annual book festival at Sister Wolf Books. Bobby spent much of the day promoting his own upcoming cookbook, and greeting visitors who’d come to see authors at the bookstore. And there were plenty of folks wandering the short boardwalk, on their way to shop or eat at one of the four restaurants crowded into the little three-block burg at the crossroads of Hwy. 226 and the Heartland State Trail, six miles east of Park Rapids.

I asked Bobby if he had advice for people visiting town.

Good sentiments from a politician who’ll have Mrs. Henry for preschool in the fall.

Mom took the mayor home part way through the long day for a nap, but reported that he didn’t sleep.

Not surprisingly, the mayor of Dorset is a ceremonial role and carries no constitutional weight or municipal authority. That’s because Dorset is unincorporated and isn’t even an actual election-holding entity. The 25 or so actual residents of the immediate area vote in Henrietta Township.

And it’s probably a good thing the position yields no official power, because big influxes of money can literally change the odds in this election. (So maybe it’s not so different from other elections, after all.)

Anyone can vote for a candidate for mayor by paying $1 and filling in a name on the ballot. So the more votes purchased, the better chance a candidate has.

Twenty-seven years ago, area merchants, led by the late Norb Kenny, were looking for a way to have some fun and promote the town and started an annual summer celebration, Taste of Dorset, based on the then-popular Taste of Minnesota in St. Paul. A couple years later, they decided to spice up the event even more, by holding the “mayoral” election.

You don’t have to be present, or even be a resident, to win. Each new mayor gets a key to the city and gift certificates to area businesses.

The money collected from the balloting, usually about $400 or $500, helps pay for entertainment and games at the free annual event. 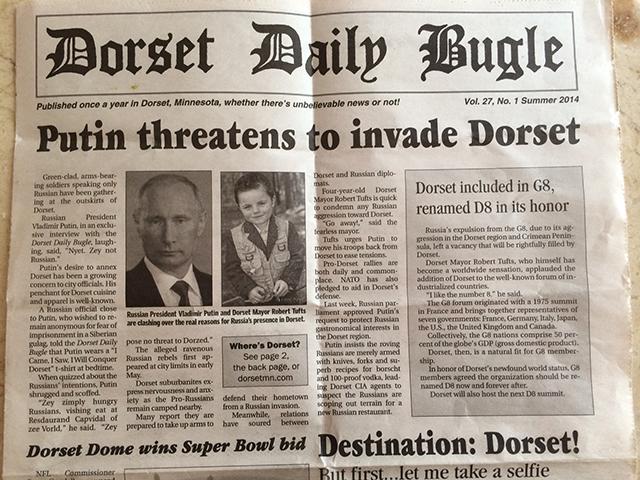 “For most years, it’s just fun for that one day,” said Laura Kempnich. She and her husband Rick run the Dorset House and Companeros, two of the four restaurants in town.

Rick Kempnich said: “We’ve had three from our crew elected mayor, and five from town and lots from all around,” including one from Omaha and one from Tennessee, who served as absentee mayors for the following year.

“One year, we had the ‘Mystery Mayor.’ The name was drawn, but he wasn’t here and there was no other information. We called around to all the names in the area, but we never did find the guy,” he said.

“To my knowledge, there were only two ballots for me in the drawing. We had been in Dorset in the fall of 1998, and sitting at the bar I asked Rick [Kempnich] about why the jar was so empty and what was the mayor of Dorset. His son, Michael, 8 years old at the time, explained it all to me. Michael wrote my name on a ballot and put in $1.  I did the same.

“I had forgotten, and was totally surprised on the first Monday in August of 1999 when the Taste of Dorset MC, Vic Olson called me at my home in Lincoln Nebraska to say I had been elected.

“Vic told me that I had No responsibility. No Duties. No Staff, and NO wages.  I did have a gift package of items from each business in Dorset. I could collect this gift package anytime I cared to return to Dorset. I also received a ‘Key to Dorset.'”

Her family returns regularly to the area and she’s worked at the Dorset Taste for many years, serving as MC of the “election.”

The Mayor is a minor

It was two years ago that Dorset hit it big with a little mayor. There was some campaigning for him around town; waitresses wore campaign buttons with his cute little face on them. And sure enough, when the random drawing was made, Bobby Tufts’ name was pulled out of the hat.

But the magic started the next summer, towards the end of his first term, when the 2013 Governor’s Fishing opener was held in nearby Park Rapids. The opener is a long-time tradition, moved to a different lake around the state each year so the host community can bask in the public relations glow that comes from the first day of fishing.

Lots of media show up; they need stories to fill the space between commercials and ads, and there’s always the hope that the governor will catch a whopper, which makes a decent photo opp, or that he’ll get skunked, which makes for a snicker of a story.

As part of the media news circus, the WCCO-TV news crew got wind of the tiny mayor in the tiny town just a few miles from Park Rapids, and included him in a story.

Bobby was so cute that the footage went viral, leading to stories around the country and an appearance on the Today Show.

And fuss continued last year, when it came time for a new election.

This time, the business people in town realized what a gold mine they had in Bobby; hundreds of ballots, each accompanied by a dollar, were cast with his name.

Laura Kempnich estimated there were about 1,000 votes last year, and about two-thirds were for Bobby, giving him great odds at reelection.

Organizers say it truly is a random drawing, noting that once a candidate offered to outright buy the mayorship for $500, but they turned him down.

So there was much suspense when hundreds of people gathered for the election last Aug. 4. A man from the crowd was selected to pick the slip from a clear tub. He was blindfolded and reached in. He later said he was worried about what the crowd would do to him if he didn’t pick Bobby’s name.

With a loud roar from the crowd, Bobby was re-crowned mayor of Dorset.

More national attention followed, GMA got in on the story and the Huffington Post carried a Mayor Bobby item.

“This has just snowballed with him; he was the perfect guy at the right time,” Rick Kempnich said. “We have more people coming to town for Bobby than for anything.”

And it may be a coincidence, and have nothing to do with Bobby, but WCCO-TV recently did a story saying that their viewers choice for best ice cream sundae was the  butter brickle ice cream, butter scotch topping, hot fudge topping and whole peanuts concoction from the Dorset House. Bobby was in that story, too.

And the Dorset Daily Bugle, a once-a-season four page newspaper-like town advertising vehicle, had lots of fun with the mayor in Onion-like articles: Bobby urging Vladimir Putin to back off on an attempt to invade Dorset; and a story saying “Mayor confirms fishing bobber tastes yucky.”

But the town elders – who surely couldn’t have imagined such a Bobby-generated windfall when they were sitting around 25 years ago brainstorming ideas to bring more fun and energy to town – say they realize he’s just a little kid, and that his family might need some time away from the spotlight. So there’s no plan to stuff the ballot box again.

“It’s been a very busy two years for the family, and I would agree that it’s maybe time to pass the hat to someone else,” Laura Kempnich said. “We want to respect the family’s wishes, so we’ll wait and see.”

Rick Kempnich said that some folks have actually already voted for Bobby, even though there’s been no formal campaign like last year. And with the random act of selection, there’s a chance he could be headed to a third term.

And his mom confirms, that, if elected, he will serve.

“He’ll be more than happy, but we aren’t doing anything to help it along,” Emma Tufts said Friday. “We’re trying to help him understand that it’s time to give someone else a chance.”

Looking ahead, Bobby tells his mom that he wants to be a shark fisherman when he grows up. “But that might change,” she said.

And if his time as mayor really is up, keep your eyes on another sleeper candidate who might make a run someday soon. Bobby has a little brother, James. He’s two.

Young Dorset mayor may hang it up — at age 5