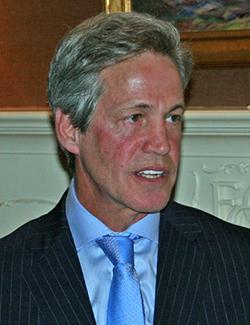 Former U.S. Sen. Norm Coleman, who’s been a lobbyist and a Super PAC head since losing to Al Franken in 2008, is now on Saudi Arabia’s payroll as a lobbyist.

The Nation, in an article noticed by Blois Olson and his Morning Take, says that Coleman is a lobbyist with the Hogan Lovells law firm and also heads two major campaign finance groups that are directing millions of dollars to Republican congressional candidates around the country.

Now, says the story: “Disclosures show that the latest addition to the Saudi government payroll includes former US Senator Norm Coleman, a Republican from Minnesota who leads one of the largest Super PACs in the country.”

And: “What’s notable about the hiring of Coleman is that he appears to be the first leader of a significant Super PAC to simultaneously lobby for a foreign government.”

Coleman is chair of the Congressional Leadership Fund, one of the largest Super PACs, and he also chairs the nonprofit American Action Network. The story says the two groups reportedly plan to funnel $8.1 million to help GOP candidates in ten congressional districts.

“Regrettably, even former lawmakers serving as hired guns for foreign governments is not unusual. But this is the first I’ve heard of a revolver serving both on the lobbying side for a foreign government and running a domestic campaign spending operation through a super PAC and dark money nonprofit group, which are not supposed to receive or spend foreign money in our elections. This type of com[m]ingling of roles is ripe for abuse and is most difficult to monitor.”

At least one of the members of Congress that Coleman’s political campaign groups is trying to defeat has influence over Saudia Arabia policy, the story says: Congressman Ami Bera, a California Democrat on the House Foreign Affairs Committee.

Saudi Arabia has added Norm Coleman to its lobbying payroll, the Nation reports