Last week we had some fun rating the State Fair’s political party booths, and, to be honest, I had been hoping that some of the bickering and spitefulness we’ve seen this election season might be taking an end-of-summer vacation amid the mini-donuts and farm animals and Midway rides.

At the GOP booth, for instance, the full-size poster of Hillary Clinton in prison garb is in a prime spot, trolling passersby on busy Carnes Avenue between the WCCO radio booth and Ye Olde Mill. And while the DFL booth, on the east side of the fairgrounds, offers less garishly partisan goods, that’s mostly because the people there were totally dismissive of anything Trump.

So this week I stopped back at the booths and chatted with a veteran volunteer of each major party, looking for some insights into the state of presidential politics by talking to them about their experiences at the fair.

‘I had some Bernie supporters upset ‘

Charlie Quick, a retired electrician from Roseville, was filling blue DFL balloons with helium when I found him at the back of the booth. He soon went outside to offer the balloons to children passing on the sidewalk.

“The kids usually want one, but I always ask the parents, first,” he said. “Sometimes the parents say no. You can tell they don’t want their kids carrying anything that says DFL. I don’t pressure them.”

He’s been coming to the booth for years, and also spends time volunteering across the way at the Labor Union booth. And he takes shifts at the DFL’s mini-donut stand just outside the grandstand.

He said he hasn’t had to deal with many fair-going Democrats carping on Donald Trump, or Republicans stopping in to disparage Hillary Clinton. “But I have talked with some Republicans who say they can’t vote for Trump, and some Democrats who say they can’t vote for Hillary. And I had some Bernie [Sanders] supporters upset that he’s not the candidate. But what are you going to do at this point? Just keep them moving,” Quick said.

Besides the balloons, Quick was asked to help keep the line moving when U.S. Sen. Amy Klobuchar stopped at the booth Tuesday to meet voters and sign books. And he said that a good-natured Republican had walked by that morning, asking, “Where’s the Trump booth?”

Kathie Roberts, a veteran GOP stalwart from South St.Paul, was greeting fair-goers and selling buttons inside the Republican booth at the start of her volunteer shift.

She said people are pretty polarized, even at the fair: “There’s no mushy middle this year.”

Roberts said the booth’s life-sized poster of Clinton in prison stripes had been “quite an attention-grabber,” with lots of folks taking selfies, or having their photos taken with it. But when I  took her picture in front of the booth, she preferred to stand by the Trump/Pence sign.

Trump didn’t do well in Minnesota’s March caucuses, coming in third behind Sen. Marco Rubio and Sen. Ted Cruz. That led to some to wonder if some Minnesota Republicans might run away from a Trump candidacy, or at least downplay the campaign to focus on state congressional and legislative races.

That’s not happening — at least not at the fair.

In addition to the Hillary pillorying, the GOP booth includes interactive screens that let visitors “help choose” a Trump Cabinet. Ben Carson is high on the list. As is Michele Bachmann.

“Donald Trump might not have been our first choice for candidate, but we’re uniting behind him,” Roberts said. “That’s because Hillary Clinton is a much worse choice.” 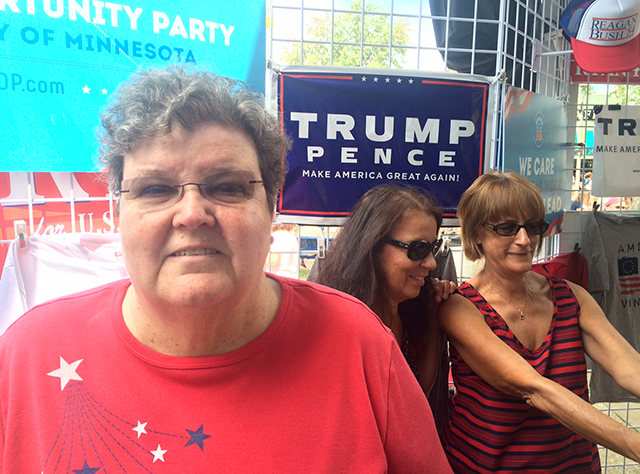 Looking back at previous campaigns, she remembered in 2008 how some Democrats disparaged Sen. John McCain, who ultimately lost to Barack Obama. A DFL tracker had come into the GOP fair booth that fall and made some negative comments on McCain’s appearance. “That bothered me so much,” Roberts said. “I wanted to say that if you’d been in an enemy prisoner-of-war camp for years that you might not look so good, either.”

I asked Roberts how she felt when Trump attacked McCain last year, when he said McCain was “not a war hero. He’s a war hero because he was captured. I like people that weren’t captured.”

“Oh,” said Roberts. “You’ve got to pay more attention to what [Trump] does than what he says.”

And with Trump polling poorly with women, maybe it was no surprise that Roberts seemed to pay particular attention to women walking into the booth. As they eyed the buttons and T-shirts displayed on the wall, Roberts would say: “We have Republican women’s groups all over the state. Come and visit us. It’s a wonderful time of fellowship.”

One woman took a brochure with the list of GOP women’s groups and actually said: “I’ll come, as long as you don’t like Hillary.”

The GOP booth ran out of Trump buttons  — $3 or two for $5  — Tuesday morning, but more were delivered on Wednesday. Still, it conducted a brisk business in other merchandise, including a “Reagan/Bush 1984” cap. The orange-ish Trump wigs, though, didn’t have many takers.

Even at the State Fair, ‘no mushy middle’ when it comes to Trump and Clinton