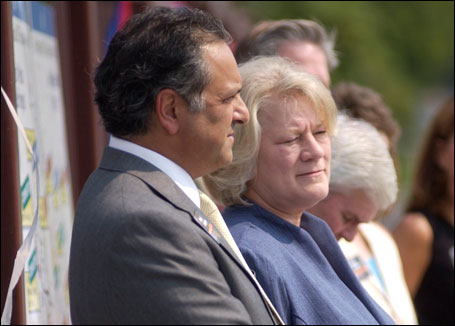 Photo by Craig Lassig
Embattled Lt. Gov. Carol Molnau, shown at an Interstate 494 bridge ceremony in September 2006, is under increased pressure from legislators and others to give up her job as head of the Minnesota Department of Transportation.

Carol Molnau will not be commissioner of the state’s Department of Transportation much longer.

If she does not step down on her own or is not asked to leave her transportation post by Gov. Tim Pawlenty, she almost certainly will not be confirmed by the DFL-controlled state Senate when it convenes in February.

Even Senate Republicans are unlikely to put up much of a fight for Molnau.

“I think there are bigger battles out there for us to get involved in,” said Sen. Mike Jungbauer, R-East Bethel, the ranking Republican on the Transportation Policy and Budget Committee.

“She’s dead; we just haven’t held the wake yet,” said Phil Krinkie, president of the Minnesota Taxpayers League and a former Republican legislator. “They (DFLers) can’t get at the governor, so they’ll go after her.”

It should be noted that Krinkie believes that Molnau, who also serves as lieutenant governor, has done a good job running the department.

But that appears to be a minority opinion.

Like many DFLers, Jungbauer believes that Molnau would withdraw if the Senate decided to bring up for a vote her confirmation for a second term. He thinks, however, that she will be nudged out of the job by Pawlenty.

“I thought he was going to act just based on some of the things he’s said,” said Jungbauer. But in an email response Tuesday to questions about Molnau’s future, the governor’s spokesman, Brian McClung, said the governor is standing by her.

Pawlenty standing by Molnau
“Gov. Pawlenty is not going to fire Lt. Gov. Molnau,” McClung said in the email. “We’ve heard these kinds of calls from DFLers multiple times in the past. And we’re hopeful that they will move beyond these personal attacks to work with us together to find a compromise [and] comprehensive transportation plan.”

That response, of course, still leaves room for Molnau to step down of her own accord. “Lt. Gov. Molnau’s plans are to continue to serve as Minnesota’s transportation commissioner,” said MnDOT spokeswoman Lucy Kender.

If Molnau’s fate is placed before the Senate, Jungbauer said he will support her confirmation simply because he believes governors should have the right to name their commissioners. But there will be little passion in his vote.

“I’m just not willing to make a fight out of it,” he said. “It seems to me both sides want to play politics. I’m one of those people who just want us to move ahead and get things done.”

Up until late last week, Sen. Steve Murphy, DFL-Red Wing, believed that Molnau would either step down or be replaced by the governor during Thanksgiving week.

“That’s a time when a lot of people aren’t paying attention,” said Murphy, who is chairman of the transportation committee.

But shortly after making the Thanksgiving prediction, Murphy said he received a call that leads him to believe Pawlenty will stand by Molnau, who is much admired by the state’s most conservative Republicans. That means she would face confirmation hearings — and doom.

Murphy says confirmation won’t happen
“She will not be confirmed,” Murphy said. “In fairness, I have to say she’s had two full-time jobs. But the fact is, she’s botched her transportation job.”

Murphy’s criticisms of Molnau pre-date the collapse of the I-35W bridge. He believes she has been a poor advocate for the department.

Like most DFLers and some Republicans, he bristles over the fact that Molnau has refused to support a gasoline tax that would direct funds to mass transit.

Since the bridge collapse, criticism of the commissioner has increased. There is a belief that under Molnau, the department has become understaffed. Also legislators say, she has been unwilling to communicate candidly with them.

For example, MnDOT officials told them that there would be no delays in other highway projects following the bridge collapse, several legislators say. Shortly after hearings, however, Molnau told reporters there would be delays.

But the final tipping point has been the missing-in-action performance of Sonia Pitt in the days immediately following the bridge collapse.

Pitt, the department’s director of homeland security, was at a conference in Boston when the bridge fell. Rather than return to Minnesota, she went to Washington, D.C., for eight days for personal reasons.

Last week, she was fired for being absent from Minnesota at a time when she seemingly would have been most needed. A MnDOT investigation also showed she had been improperly charging the state for personal travel expenses.

But the firing wasn’t enough for the governor. This week, it was announced that Pawlenty’s administration will investigate whether Pitt was being properly supervised.

Jungbauer pointed to the Pitt fiasco as a reason for members of both parties to question if the transportation department is being run well.

Murphy believes that Pawlenty would like a new commissioner but doesn’t have the political will to remove Molnau.

“He doesn’t want to offend his political base by replacing one of their favorites,” Murphy said. “Instead, he’s going to let us do it.”

Doug Grow, a former metro columnist for the Star Tribune, writes about public affairs, state politics and other topics. He can be reached at dgrow[at]minnpost[dot]com.