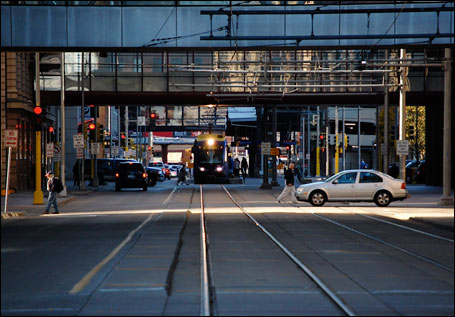 Photo by Steve Date
Two prominent urban designers argue that Minneapolis skyways take the life out of the city by moving people off the streets.

When two of the world’s top urban designers drop in for a visit and come away with the impression that your city — in this case Minneapolis — is a relic of the 1970s, ill-equipped to thrive and compete in a new century, and that its only hope is to tear down its skyways, well, that gets your attention.

“I feel sorry for Minneapolis,” said Jan Gehl, the celebrated Danish architect whose work around the world has linked the rising importance of good public spaces to a city’s success.

Thirty years ago, Minneapolis was thought to be a leader among winter cities. But taking people off the streets and putting them upstairs, “under glass,” hasn’t worked in Minneapolis or anywhere else, Gehl said, to the point that Minneapolis is no longer “up to the beat of the world-class cities of the 21st century.”

Gil Penalosa, a noted public parks developer in both Latin America and Canada, said that the skyways lend a defensive, pessimistic air to the downtown core when, in reality, they are needed for only a few weeks of the year. “They suck the public life out of the city,” he said.

Given the fat chance that Minneapolis will remove its eight miles of skyways, both men agreed that finding a solution poses one of the toughest design challenges faced by any city in the world: creating vitality at street level when most foot traffic has been shifted to the second story.

The biggest problem, both said, is that people in Minneapolis don’t realize that great cities — even cold cities — are now defined by the vitality of their street life. “People here don’t see a crisis,” said Gehl. “They don’t yet see themselves as behind the times.”

Timely critique
Both men spoke last month at a “Vital Winter Cities” conference sponsored by the Urban Land Institute’s Twin Cities chapter. Then, after two days of meetings and tours, they shared their impressions with MinnPost.com over lunch on the Nicollet Mall.

Their critique is timely. The city’s political, business and design leaders are studying ways to better integrate working, living and shopping in the downtown district, all with less reliance on cars. All agree that skyways pose an almost unique challenge. “They are both the best and worst things that ever happened to Minneapolis,” said Mayor R.T. Rybak. They saved downtown from “folding up” in the 1970s, he said, but they don’t offer what people expect in cities today.

The problem, Gehl explained, is that skyways violate the first law of successful city-building: keeping people together in a critical mass. Minneapolis’ skyways — as with similar pedestrian bridge or tunnel systems in Calgary, Toronto and elsewhere — disperse people over different levels at different times. On weekdays, skyways bustle and shops flourish for a few hours a day. But at night and on weekends, people are thrown out onto barren and neglected public sidewalks. A social hierarchy develops: the wealthier classes in private spaces on weekdays; poorer people out in public spaces at all hours. That’s not a winning formula, Gehl said. It’s bad for retail business, bad for culture, bad for civic life.

The impression given, said Penalosa, is of a fearful city crouching inward against a hostile climate and a hostile world. That’s not the kind of optimistic city that most people — especially young people — are looking for, he said. Repeating the phrases of economist Richard Florida, Penalosa said that if a city doesn’t present itself as vital at street level, then talented people won’t choose to live there, especially when they can live in Chicago or Seattle or anywhere they like. And if talent isn’t attracted or drifts away, then the quality of a city suffers.

What has placed skyway-bound Minneapolis out of step, said Gehl, is a broad cultural shift around the world in the way people use urban spaces. No longer do people just pass through city centers while traveling between work and home. City centers have become places to pause and enjoy life away from work and away from home, he said.

The utilitarian nature of cities is being altered by “Mediterranean influences,” made possible by rising affluence and the changing nature of work. People are using cities to hang around and enjoy one another. The rising number of nontraditional workers — consultants and independent contractors — has abetted this transformation, he said. Even cold cities (Copenhagen’s average temperature is only two degrees warmer than Minneapolis’) have developed an impressive sidewalk culture for 10 months of the year — thanks, in part, to gas heaters. The trend is, perhaps, best summarized by the title of one of Gehl’s books: “Life Between Buildings.”

‘We do have parks’
Local reaction to the Gehl-Penalosa critique varied. Judith Martin, professor of geography and urban studies at the University of Minnesota, said that viewing Minneapolis through a European lens misses the point. U.S. city life consists of far more than sitting around drinking cappuccino, she said. Besides, the tax structure here doesn’t allow the rebuilding of cities on the European model. As long as there are other needs (education, police, etc.), nice streetscapes won’t be a priority. “Maybe we don’t have an interesting downtown,” she said, “but that’s not our defining feature; we do have parks.”

Tom Fisher, dean of the university’s School of Design, said he thinks that downtown is important and that skyways pose an “extreme challenge” for Minneapolis, but one that should be turned into an opportunity. He’s involved in the Walking Minneapolis initiative, a public-private effort to revive street-level activity. One suggestion is to spread the city’s best asset — parks — onto some downtown sidewalks in order to connect condos to jobs and shopping, and to create a pleasant, more walkable atmosphere at street level.

For Sam Grabarski, president of the Downtown Council, the skyway question is complex: They are very bad for retail, very good for office towers, he said. He favors a moratorium on new skyways, better signs to de-mystify the system and far more exterior connections between street and skyway levels. The council is studying how to refocus retail in view of changing tastes in shopping and the city’s two-level problem.

Midge McCauley, a Philadelphia retail consultant who has studied Minneapolis and wishes its skyways could be demolished, said: “Skyways take vitality off the streets, and retail gets its energy from the streets. So it makes no sense to take people off the streets for 10 months of the year — including the best shopping months.” Minneapolis would have far better retail if it weren’t for skyways, she said.

Some suggestions
Gehl said he knows of no city in the world (outside of ultra-crowded Japan) that succeeds on two levels. Nonetheless, Minneapolis has little choice but to try, he said.

“There’s a lot of potential at ground level,” Gehl said. “The key is to celebrate the wonderful possibility of good-weather days rather than focusing on the bad days and feeling sorry for yourself, which is the impression one gets.”

He offered four suggestions: an urban square to provide an outdoor focal point that the city now lacks; more use of water features downtown to reflect a city-of-lakes theme; the blocking of skyways every two or three blocks to lure people — and retail — to the street, and working to attract the region’s tens of thousands of college students to the city’s core.

There’s a paradox to downtown’s problem. It has undergone a housing boom and a cultural revival, and the office market is holding its own. But retail and street-level vitality isn’t what it should be. Transforming barren streets is a daunting task for a financially strapped city. Penalosa claims, however, that the costs are comparatively small. “It’s all a matter of priority,” he said. “There’s always enough money to accommodate cars, but I don’t know of any city, when there’s a pothole in the street, [someone suggests that they] need to go to a private foundation to get it fixed.”

Minneapolis is still reaping huge benefits from its decision in the 1880s to preserve its lake shores as public parks, Penalosa said. A similar payoff would come if the city revitalized its outdoor spaces downtown. It’s happening around the world, he said, in New York, in Portland, Ore., in Vancouver, B.C., and in Aarhus, Denmark, Melbourne, Australia and Lyon, France, to name a few cities. Even with the disadvantage of skyways, he said, it’s worth a try here.