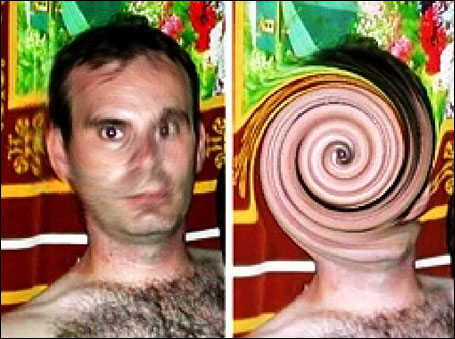 The digitally unswirled image of the suspect believed to be Christopher P. Neil, 32, who was arrested in Thailand Oct. 19.

When I first read about the German computer scientists who unswirled the digital image of a suspected Canadian pedophile that led to his October arrest, their Photoshop techniques sounded terribly obscure.

The pedophile at large had posted pictures of himself and his young victims online. To protect his identity, he had digitally manipulated his face using a swirling pattern.

The German scientists managed to unswirl it, sliding pixels back to their original location.

Leave it to the no-nonsense Germans to advance Photoshop’s crime-fighting functions, I figured; Americans are too busy using it for cosmetic effects.

So when I talked to Minneapolis’ FBI Special Agent Paul McCabe, I was surprised to hear him say, “Something like that, we could handle easily.”

Parents, rest assured: No swirl-faced pedophile could run rampant in the Land of 10,000 Lakes.

Local FBI is cyber-savvy
Minneapolis bureau investigators employ a wide range of techniques and software, Photoshop among them, to obtain critical evidence from digital images. For example, in a bank robbery, they can digitally enhance the surveillance video in order to pick up the license plate of a getaway vehicle. They can clarify blurry images and enlarge tiny ones to capture a face, a watch, a ring, a tattoo — whatever the case may call for.

“Keeping up with technology is important because the criminals are also taking advantage of the same technology,” McCabe said. “We feel we’ve been ahead of the curve for a long time when it comes to digital and cyber-forensics. Keeping ahead of the game is not cheap.”

The Minneapolis FBI has been aggressively hiring technology experts for years, and it continues to. “What’s different now, because all these electronic devices are seized in searches, is that the majority of criminal investigations require experts who can mine that data. Your regular gumshoe investigator is not going to do that; you have to have people who are highly trained.”

Cell-phone cameras a godsend
New technologies can provide substantial assistance to criminal investigators. The switch from VHS to digital surveillance videos, for instance, made their work easier, McCabe said.

So has the widespread installation of cameras on cell phones, along with their steadily improving resolution. “If someone is witnessing a crime and they can actually snapshot or video it,” McCabe said, “that’s very good evidence.”

And yet, he said, the rapid advancement of technology also poses a burden, demanding the FBI to stay ahead of cyber-savvy criminals and to effectively juggle emerging technologies with all the traditional components of a criminal investigation.

You can swirl, but you can’t hide