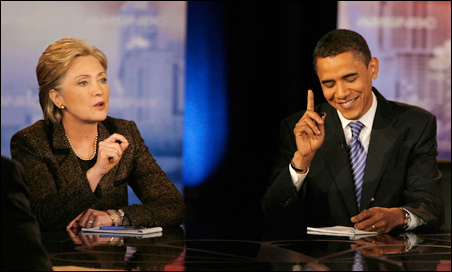 A key premise of Sen. Hillary Rodham Clinton’s presidential campaign — and a point of argument in Tuesday night’s Democratic debate in Cleveland — has been her contention that she is more experienced than Sen. Barack Obama, is prepared to face the world and its uncertainties, and is ready to be commander in chief on day one.

After Clinton made the case in Tuesday’s debate, Obama shot back with a rejoinder on the war in Iraq, which included this line: “Senator Clinton often says that she is ready on day one, but in fact she was ready to give in to George Bush on day one on this critical issue.”

Now, as their campaigns enter a crucial period — March 4 contests in Ohio and Texas are seen as critically important to Clinton — and as Sen. John McCain, the presumptive Republican nominee, begins to tune up for the general election, the experience question promises to be a key issue. Is experience in foreign policy and national security affairs essential for a president? And is it an important factor for voters?

In a New York Times-CBS News poll out Tuesday, voters said they had more confidence in Obama than in Clinton to handle an international crisis and said it was more likely that Obama would be a more effective commander in chief than Clinton. McCain led both in those two categories. Yet Obama was considered more likely to improve relations with other countries than either Clinton or McCain.

McCain, a former Navy pilot, prisoner of war in North Vietnam and a senator since 1987, has supported President Bush’s unpopular Iraq policy and has criticized Obama on the experience issue. “I will work hard to make sure Americans aren’t deceived by an eloquent but empty call for change,” McCain said recently. He said foreign policy comments by Obama showed the “confused leadership of an inexperienced candidate.”

Time for a re-evaluation
David Ignatius, writing in the Washington Post, says foreign-policy experience has to be re-evaluated in the changed world of the 21st century:

” ‘When it comes to foreign policy, experience is a highly overrated asset,’ ” his column begins. “So says a former British foreign service officer named Jonathan Clarke, who has created a blog called theswoop.net. “What my friend Clarke means is that the set of issues and strategies that shaped the Cold War generation has passed. He’s a product of that generation himself, having served at the sharp end of the spear for the British government in various Cold War hot spots. But that era is over. The intellectual matrix formed by the Soviet threat, and before that by Hitler’s rise in Germany, needs to be reworked. There is a new set of problems and personalities — and if America keeps trotting out the same cast of characters and policy papers, we will fail to make sense of where the world is moving.”

Ignatius concluded, “To prepare for the next stage of the U.S. presidential campaign, try this thought experiment: Imagine the television footage of Barack Obama’s first trip abroad as president — the crowds in the streets of Moscow, Cairo, Nairobi, Shanghai, Paris, Islamabad. Now try to imagine the first visit by President John McCain to those same cities. McCain is a great man, and he would be welcomed with respect, deference, perhaps a bit of fear. Obama would generate different and more intense reactions — surprise and uncertainty, to be sure, but also idealism and hope. Now tell me which image would foster a stronger and safer America in the 21st century. Obama has liabilities as a candidate, but his inexperience paradoxically may actually bolster one of his core arguments — that he would give America a fresh start.”

Hamline University political-science professor David Schultz pointed out in an interview that many presidents in recent years have had limited foreign-policy experience before taking office, including John F. Kennedy, Ronald Reagan and George W. Bush. “Commander-in-chief skills and dealing with a foreign-policy crisis are among the many characteristics voters look for. Do I trust the judgment of the candidate, how would they handle the economy, who are the people he will put in place as advisers. … History suggests that foreign-policy experience is not that critical.”

In a long essay last November in the New York Times magazine, before Obama had taken control of the race, James Traub wrote: “Obama speaks with special passion about the need to change America’s image in the world — and not only by proving that it can elect a 46-year-old black man with roots in the Muslim world. He returns again and again to the question of what America means to the rest of the world. In one of his speeches, he observed that United States senators typically see ‘the desperate faces’ of Darfur or Baghdad from the height of a helicopter. ‘And it makes you stop and wonder,’ he added, ‘when those faces look up at an American helicopter, do they feel hope, or do they feel hate?’ “

Traub concluded that the American people “need to know that they’ll be safe with Barack Obama. Or unsafe with Hillary Clinton. Two months before the presidential primaries begin, it still looks like a hard sell.”

A bridge between two worlds
Conservative Andrew Sullivan, who is an Obama fan, explained late last year why he thinks Obama’s view of the world and ability to reach across divides may be more valuable than traditional foreign policy experience: “At a time when America’s estrangement from the world risks tipping into dangerous imbalance, when a country at war with lethal enemies is also increasingly at war with itself, when humankind’s spiritual yearnings veer between an excess of certainty and an inability to believe anything at all, and when sectarian and racial divides seem as intractable as ever, a man who is a bridge between these worlds may be indispensable. We may in fact have finally found that bridge to the 21st century that Bill Clinton told us about. Its name is Obama.”

Susan Page, writing in USA Today, said the three remaining candidates “have less executive grounding than anyone elected to the White House in nearly half-century. Each candidate has scored impressive achievements in life, but none has run a city or state, a small business or large corporation — or any bureaucracy larger than their Senate staffs and campaign teams.”

Page quotes presidential historian Robert Dallek as saying that “there are so many presidents with a great deal of experience who failed miserably.” He cites James Buchanan, president just before the Civil War, who was so experienced that he was called “Mr. Government — and now is invariably listed as one of the worst presidents in the country’s history.” His successor was Abraham Lincoln, who, like Obama, served in the Illinois Legislature and later one term in Congress. “He had next to no experience at all and now is seen as probably the greatest president in the country’s history.”

Experienced or not, many presidents, Page wrote, faced unexpected crises and “defining decisions,” soon after taking office. For example, Lincoln faced the secession of Southern states, Herbert Hoover the collapse of the stock market, Harry Truman the decision of whether to drop the atomic bomb on Japan, JFK the Cuban missile crisis and George Bush the Sept. 11 attacks.

Will Obama, Clinton or McCain be ready?