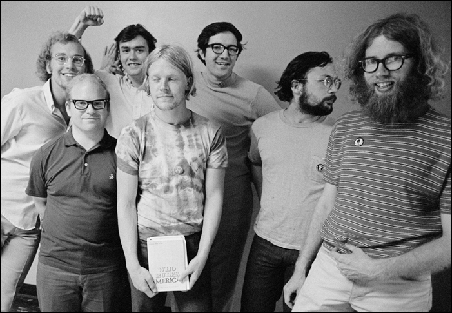 As St. Paul attorney Bill Tilton chatted with a retired policeman at lunch recently, Tilton casually mentioned he once served time in a federal prison. His cop friend of some years was stunned.

Nearly four decades have passed since Tilton and seven others were arrested on July 10, 1970, while trying to break into government offices in three Minnesota towns — Little Falls, Alexandria and Winona — to destroy draft records. During subsequent trials, they were dubbed “The Minnesota 8” and their defenses centered on their opposition to the Vietnam War and the use of the draft to force men to fight it.

“I’m proud of what I did, but you don’t talk about your old medals,” Tilton said. “There’s a danger of getting stuck in a time warp.”

That said, Tilton is looking forward to seeing “Peace Crimes: The Minnesota 8 vs. the War,” a new play opening this weekend at the University of Minnesota’s Rarig Theater Center. Though produced by St. Paul’s History Theatre, the play is being staged on the campus where Tilton and his fellow felons were working or attending school when they were arrested.

Some of the Minnesota 8 have met with the cast of the play and a few have attended rehearsals. While Tilton mostly has been an observer, he’s enthusiastic about the project “because it’s sparking dialogue about contemporary foreign policy” — specifically, the parallels between Vietnam and Iraq that he believes are obvious.

Besides, he adds, the actor playing him is “a big loud guy — so it’s type-casting.” 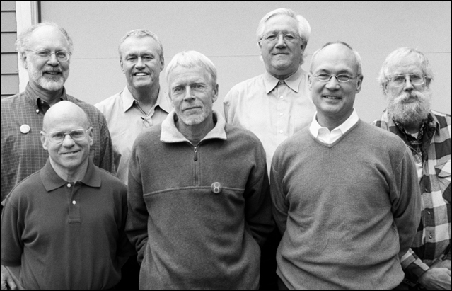 The Beaver 55 Caper
In 1970, the U of M campus was roiling with anti-war fervor. Earlier that year, anti-draft activists had participated in a caper they called “Beaver 55” that involved a break-in at the St. Paul post office. The office was trashed and thousands of draft records were destroyed. Other break-ins followed, culminating in the foiled attempts in July.

By then, according to Minnesota 8 member Frank Kroncke, some 100 FBI agents had converged on Minnesota to track down the draft-office raiders. Members of the Minnesota 8 and others took “moral responsibility” for earlier trashing of Selective Service records and offices, but no one was ever convicted of those crimes. In all, Kroncke claims the activists destroyed draft records for some 10,000 Minnesota men.

The eight were initially charged with attempted sabotage of the national defense, an offense carrying a hefty prison sentence. But the charge was later reduced to attempted burglary. In addition to Tilton and Kroncke, the defendants, whose ages ranged from 19 to 26, were Cliff Ulen, Chuck Turchick, Mike Therriault, Brad Beneke, Don Olson and Pete Simmons.

‘Sons of the Establishment’
At the time of their arrests, a reporter for the Minneapolis Tribune named Molly Ivins — subsequently the nationally known columnist who died last year — wrote a profile of the eight defendants. It began with this description:

“One is a theology teacher, another a conservation commissioner in Brooklyn Center, another a member of Phi Beta Kappa; another was vice president of the student body at the University of Minnesota; another was a fraternity president, and three had planned to be lawyers.” Ivins went on to label the defendants “The Sons of the Establishment.” 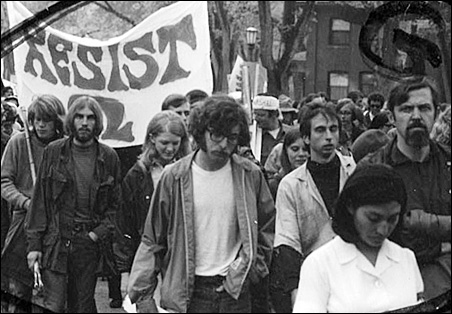 Courtesy of Cheryl Walsh Bellville
Members of the Minnesota 8 march in a Vietnam War protest.

Ulen pleaded guilty to burglary and was given probation. The Minnesota 8 became the Minnesota 7 after that plea, and Ulen has not associated with the group since. Each of the remaining seven was tried, convicted and sentenced to five years in prison, though none served more than 20 months. After being released, they went their separate ways, some moving out of state, some returning to school.

A number never strayed far from idealistic causes. Don Olson, for example, got involved in the food co-op movement and became a local liberal pundit; he currently hosts a local talk-radio show on KFAI. Pete Simmons works with a nonprofit group called Peace in the Precincts, which advocates for nonviolent ways to promote international relations.

From memoir to stage
Frank Kroncke’s prison sentence was delayed by legal appeals. While waiting, he wrote an account of his experiences and assembled transcripts from the trial and its aftermath. He served only 14 months, but it changed the direction of a life he had planned to spend teaching theology at some Catholic university.

Instead, he moved to Southern California and spent 20 years working in sales and marketing. But his role in the Minnesota 8 was never far from his mind.

Those memories returned to reality three years ago when Kroncke was in the Twin Cities on a business trip. An old activist friend — Joe Selvaggio, founder of Project for Pride in Living — was the subject of a play at History Theatre and Kroncke went to see it. Afterward, Kroncke gave the manuscript of his memoir to the theater’s artistic director, Ron Peluso, and asked, “Do you think there’s a play in this?”

Peluso thought there was, but he wanted a professional playwright to write it — so he contacted the Minneapolis-based Playwrights’ Center and was put in touch with California playwright Doris Baizley. When her early draft of the play was given a public workshop staging last year, Peluso realized the controversies surrounding the Minnesota 8 haven’t gone away. Far from it. 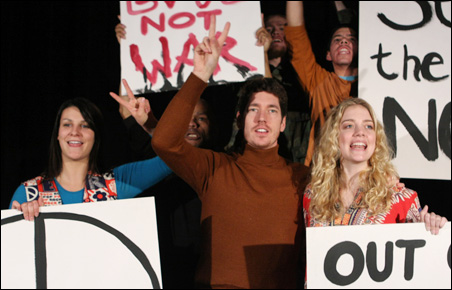 “We had people walk out because they felt the play was one-sided,” Peluso said. “One woman said she was a secretary at the draft board and that they were terrorized by what these guys did. Some people felt it was an act of treason and said so.”

Peluso said he also got calls from men who said they wanted to thank the Minnesota 8 “because they were never called up for the draft.”

“There may be thousands of Minnesotans who never got the call because of what these guys did,” Peluso said. “Of course, we’ll never know for sure.”

A point of view
Audience reactions from all sides were added to the script, though Peluso acknowledges that “it’s not a balanced play by any means. It has a point of view, because that’s what theater is about.”

Indeed, the selection of Baizley to write the script left no doubt about the play’s viewpoint. Though she was initially unaware of the Minnesota 8, Baizley’s career as a writer was forged in the anti-war movement. At the time of the Minnesota 8 trials, Baizley was living in New York and using the proceeds from her anti-war plays to help send draft-dodgers to Canada.

“The subject for me is personal,” she said. “The anti-war movement grabbed me in the 1960s when my boyfriend went to Vietnam and didn’t survive it. I’ve never run out of interest in it.”

She decided, however, to use the story of the Minnesota 8 as a framing device for a view of the world during a turbulent time. The play moves fluidly across time, showing a soldier and nurse in Vietnam, civil rights activists, feminists and young people from a number of generations.

“I’m proud to say there is no courtroom furniture in this play,” Baizley said. “We took material in court transcripts, testimonies, letters, instructions from judges — but we used everything in a free-floating way.”

Actors from today
The production also involves student actors from the University of Minnesota as well as local professionals. In some ways, the students were the most curious about university life during the turbulent era, Kroncke said.

Kroncke believes, however, that “Peace Crimes” isn’t a play about the past.

“I suppose some people would say, ‘This must be an ego trip for you guys, even a validation,’ ” he said. “Part of me is very sad, because this isn’t about old guys reminiscing about a war. This is about things that are going on right now, that haven’t gone away. The Selective Service System says it has the names of 90 percent of all the teens on file, just waiting for when they’re needed. And you can’t destroy draft-board records anymore because they aren’t on paper. They’ve become very efficient and successful in what they’re doing.”

Tilton, however, believes the return of a military draft is extremely unlikely — “political suicide,” he calls it. Meanwhile, he looks forward to seeing the play with a bit of bemusement.

“I thought you have to be dead to have a street named after you or a play written about you,” he said, laughing loudly. “Maybe I’m late for my own funeral.”

MinnPost writer David Hawley was drafted in 1969, served two years in the Army and is a disabled veteran. His father, a pacifist, was a conscientious objector during World War II. During the Vietnam era, his older brother was a medic in the Army Reserve and his younger brother was a conscientious objector. Hawley, a former reporter for the Pioneer Press and published author and playwright, can be reached at dhawley [at] minnpost [dot] com.

Courtesy of Scott Pakudaitis
Nick Freeman and Natalie Remus in a scene from “Peace Crimes.”

The production is a collaboration involving History Theatre, the Playwrights’ Center and the theater department at the University of Minnesota.

Also involved is Peace and War in the Heartland, an organization founded by members of the Minnesota 8. Two websites connected with the group contain extensive archives, including newspaper clippings, photographs, trial transcripts, related correspondence and commentaries about current events and activities.

The Peace and War in the Heartland website also features an interactive “Virtual Draft” section that explains how a modern draft system might work.

Twin Cities Public Television (Channel 17) will air a 30-minute segment at 8 p.m. Saturday (Feb. 23) on the Minnesota 8, as seen through the eyes of the playwright, the actors and the director of “Peace Crimes” as well as  through interviews with some of the original participants.

The speakers
The University of Minnesota’s Great Conversations series has scheduled an appearance by Daniel Ellsberg, who appeared as a defense witness during the Minnesota 8 trial and later was the focal point of the Pentagon Papers controversy during the Nixon administration. Ellsberg will participate in a conversation with Larry Jacobs of the university’s political science department at 7:30 p.m. Tuesday (Feb. 26) in the Ted Mann Concert Hall. Tickets can be purchased by going here.

Daniel Ellsberg Q-A: In some ways, ‘I’m as pessimistic as I’ve ever been’