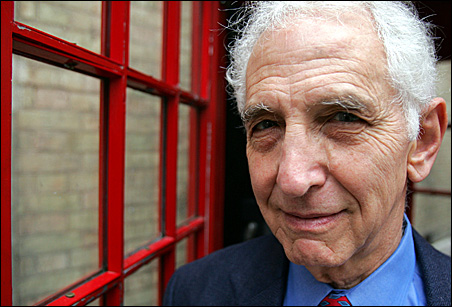 REUTERS/Stephen Hird
Pentagon Papers whistle-blower Daniel Ellsberg, shown during a 2004 visit to London, remains pessimistic about the direction the nation is going.

There was some concern in Daniel Ellsberg‘s voice as he talked about the five-day trip he is making to Minnesota, beginning Friday.

“I once bought a coat just for Minnesota,” said the man who in 1971 released portions of the Pentagon Papers to 19 different newspapers. “But I can’t find it, and I understand it’s pretty cold there this year. All I’ve got is a raincoat with a liner.”

Told  of the below-zero temperatures Minnesotans have endured this week, there was a long pause before Ellsberg said, “I guess I’ll bring some sweaters, too.”

He could afford a new coat. These days, Ellsberg, 77, is paid handsomely for his writings and travels around the country talking about the cynicism and hypocrisy of government and the parallels between the war in Iraq and the Vietnam War.

Pentagon Papers whistle-blower Ellsberg risked his freedom
But it shouldn’t be forgotten that Ellsberg risked his freedom in releasing 7,000 pages of documents — the Pentagon Papers — that not only embarrassed the administration of Richard Nixon, but the prior administrations of Lyndon Johnson and John Kennedy as well. Those papers, which Ellsberg, once a Marine and hard-nosed cold warrior, had helped create, showed that the administrations of all three men had lied to the public about whether Vietnam was a winnable war.

Sixteen days after the New York Times published the first batch of the papers — June 13, 1971 — Ellsberg turned himself in as the whistleblower. He was charged with theft, conspiracy and espionage and expected he would spend the rest of his life in prison.

But the Nixon administration’s efforts to smear Ellsberg’s name backfired. G. Gordon Liddy and E. Howard Hunt, members of the White House Plumbers, broke into the office of Ellsberg’s psychiatrist in September 1971, seeking information to damage Ellsberg. Instead, their burglary attempt became part of the Watergate Scandal, and in time charges against Ellsberg were dropped because of “gross government misconduct.”

Ellsberg will be in the Twin Cities to participate in the opening of the play “Peace Cries: The Minnesota Eight Vs. the War” (see related story) and to participate as a guest in the University of Minnesota’s Great Conversation Series at 7:30 p.m. Tuesday at the Ted Mann Concert Hall.

MinnPost caught up with Ellsberg — via telephone — at his home near Berkeley, Calif., for a question-answer session:

MinnPost:  What is your relationship to the Minnesota Eight?

Daniel Ellsberg: I came to Minnesota to testify at their trial. It was January (1972) and it was cold then, too. I had the Pentagon Papers with me; I hoped to introduce them into the trial, but the judge (federal judge Edward Devitt) blocked that. When I said the president lied, he blocked that. I said that the president lied and I had the documents to prove it. I was going to introduce 1,000 pages into evidence. But as soon as I said he lied, the judge said, ‘Stop right there. I’m not going to hear the president called a liar in this courtroom.’ I think that’s one thing that would be different today. If somebody said in court that the president was a liar, nobody would even blink. If somebody said that the president told the truth, that would make headlines.

MP:  If, as you say, there always were parallels between Vietnam and Iraq, why didn’t the administration see them?

DE: You’re talking about people who never were in a position to learn about Vietnam. McCain was brave, but he was in a prison cell and out of touch with what was happening. I take it he went into prison believing that if we bombed a little more, we’d win the war. He still believes that.

So they all chose to be ignorant of what was to be learned — and we have to pay a terrible price in Iraq. This notion that we could have won in Vietnam if we had asserted our will is dangerous and wrong. They’re just smart dolts. Paul Wolfowitz illustrates that great intelligence can co-exist in the same head with stupidity.

MP: What of the rest of the population? Why was the American public so quick to forget Vietnam?

DE: First of all, it’s been quite a bit of time. A new generation has come along. From whatever is to be learned from 35 years ago might be forgotten. What disturbs me more is the ability of the president to use the same lies that got us into Iraq into Iran.

MP: Do you have any hope that things will change?

DE: Fortunately, I live on a thin diet of hope. The uncertainties of the future support that little bit of hope. I reflect on the fact that unforeseen things do happen. The fall of the Soviet empire was unforeseeable; the shift to majority government in South Africa without massive bloodshed is something nobody could see. Things can happen for the good. But my wife likes to cite the Chinese proverb: If you don’t change course, you’ll end up where you’re heading. There’s global warming. There’s the threat of nuclear wars. Over the long period, we are headed toward those things if we keep going the same direction. In that way, I’m as pessimistic as I’ve ever been.

MP: Nothing to be optimistic about?

DE: I think Obama offers hope not only on the basis of his appearance, but because of the uncertainty of what he’s saying. I do buy into his hopes. I don’t know what he’ll do, but maybe he’ll do something right for a change. We know that McCain is not an agent of change and when Obama says Hillary Clinton doesn’t sound like an agent for change, he’s right. She sounds very hawkish to me. She says she’s equipped to stand up immediately and be the commander in chief. What are her qualifications to say that? She was the wife of the commander in chief? If those are qualifications, then Laura Bush is more qualifed than Obama. Obama is on good ground with regard to Iraq. He showed much better judgment than Clinton. There’s hope in that.

MP: If there were a draft, would there be more outcry over the war?

DE: Many of my friends argue that. They believe that if there was a draft, the demonstrations would be larger, this war would be more democratic. But I’m not enthusiastic about a draft. I fear the wars would be larger.  Without a draft, we could never have put 500,000 troops in Vietnam. I fear if we had a draft, we’d just involve more troops.

MP: Would today’s newspapers have the courage to publish something like the Pentagon Papers?

DE: It’s an interesting question. I think if you turn over documents, there’s a good chance they will be published. On the other hand, it sometimes takes so long. The New York Times sat on the National Security Agency documents that showed the president had lied about illegal wiretapping for a year. But they finally did publish, and they got a Pulitzer Prize for it. It would have been interesting to see if they’d published before the (2004) election if it would have made a difference to the public that the president lied about wiretapping.Remember, it was a very close election. Maybe, by sitting on the story, the New York Times gave us Bush for a second term.

MP: What are your reading habits?

DE: I start the day by looking at Antiwar.com and then Commondreams.org. And I also read the New York Times and the San Francisco Chronicle every morning. But the newspapers can be very frustrating. I find they’re not always the best way to start the day.

Nearly four decades have passed since eight men were arrested while trying to break into government offices in three Minnesota towns to destroy draft records during the Vietnam War. A new play based on their story opens Friday at the University of Minnesota, where “The Minnesota 8” were working or studying at the time of their arrests.