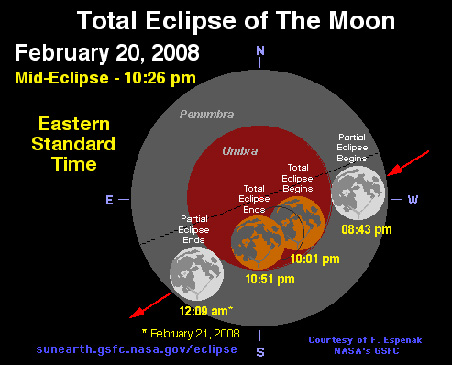 Tonight will be your last chance for almost two years to see a total lunar eclipse.

The Earth’s shadow will begin obscuring the full moon at 7:43 p.m.  Central time. Such an event won’t happen again until Dec. 21, 2010, according to the Minnesota Planetarium Society.

The moon will be totally eclipsed by 9 p.m. then begin crawling out of Earth’s shadow at 9:52 p.m., the society reported in its February newsletter.

By 11:43 p.m., the show will be over and the moon will be free to shine in full glory until it sets in the wee hours of the morning.

Routine though they might be, such extraterrestrial events remind us that we share a relatively small planet. If you watch it, keep in mind that the same show can be seen from South America, Western Europe, Africa and western Asia, according to the National Aeronautics and Space Administration’s eclipse home page. Of course, clocks will show a different time and even a different date in some viewing spots around the globe. But it’s the same Earth casting a shadow over the same moon everywhere.

Dramatic color possible
There are no guarantees, but NASA said the moon can take on a dramatically colorful appearance – from bright orange to blood red to dark brown to (rarely) very dark gray – as the Earth passes between the moon and the sun in a lunar eclipse.

The shadow thrown by the Earth will consist of two cone-shaped parts, one nested inside the other, NASA explained. The outer shadow (penumbra) is a zone where Earth blocks some of the sun’s rays. In the inner shadow (umbra), all direct sunlight is blocked.

Why do we have to wait two years to see another total eclipse? According to the Planetarium Society: “A lunar eclipse can only occur when the moon is directly opposite the sun in the sky — a full moon. “Even though there is a full moon each month, a lunar eclipse does not occur on a monthly basis because the sun isn’t exactly in line with Earth and the moon. The moon’s orbit is actually tilted 5 degrees from that … of the Earth around the sun; otherwise, we would have a lunar and a solar eclipse each month.”

No doubt you’ve been warned in the past not to watch a solar eclipse with the naked eye because you could seriously damage your eyesight. Not to worry with a lunar eclipse. You can relax and enjoy it. Of course, a telescope or binoculars would enhance your view.

The Planetarium Society had planned an eclipse party tonight at Joe’s Garage (1610 Harmon Place, Minneapolis), with telescopes set up on the deck. But a different natural event – frigid weather – might interfere. The society recommends calling 443-474-4733 after 6:30 p.m. to make sure the party hasn’t been canceled.

Tonight’s sky will be a rare sight to behold