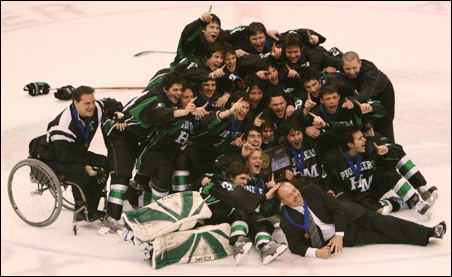 When the exuberant Hill-Murray hockey players splashed onto the ice to celebrate their March 8 victory over Edina in the state High School Hockey Tournament championship game, assistant coach Pat Schafhauser followed them out onto the rink. In his wheelchair.

And even without skates, you could tell he knew his way around a blue line.

Skidding around the Xcel Energy Center rink with the players, it was obvious how much he reveled in the moment:

“It was by far the most satisfying thing I’ve ever done in hockey, playing or coaching. To see how happy our players were: the relief, the laughing, the crying. Seeing them realize what they ‘d worked so hard for…” he told me.

Schafhauser was a star player for the Hill-Murray Pioneers for three years in the late 1980s; he went on to play for Boston College and then played five years of pro hockey in Switzerland. His career ended in December 1995, when he was injured during a game. He’s now paralyzed from the waist down.

He coaches hockey and life skills
He’s been an assistant varsity coach at the Maplewood school for the past 10 seasons, using his vast hockey experience to teach the players a few things about the game. And there are some life lessons taught, and learned, too.

“He knows the game so well, and anything he can no longer physically do, he’s great at explaining to the players; he’s such a good verbal coach,” said head coach Bill Lechner.

He’s also an inspiration for the team: “When we think we’ve had a bad day, we think about the things he goes through. It’s a great incentive to keep going,” Lechner said.

Said Schafhauser: “I believe I have some credibility with the kids; I’ve played in a lot of places, and nothing replaces experience. It’s great to have a chance to pass that along.”

At the beginning of each season, he explains to the team about his injury. He was checked from behind and went skidding into the boards.

“I got hit in the back. Was it a cheap shot? It’s hard to say. I call it a violent collision. If I let myself believe it was a cheap shot, I think I’d be bitter. But I really don’t think anyone goes out there to intentionally do any harm,” he said.

And after addressing the issue, he moves on and starts coaching. He’s responsible for the team’s defensemen and the overall defense, including penalty kills.

After a few days of practice, the wheelchair is a non-issue with the players, he said.

“Because of the injury, I do have to be more prepared to explain what I want out of the guys; instead of showing them how to do it on the ice, I  have to put more thought into expressing myself,” he said. “And I do understand the struggles they face trying to learn new things; and maybe the injury helped me be more patient with them.”

As a player, Schafhauser was a great leader, a great young man,” Lechner remembers. “He was a big, strong kid, tough on the rink but polite and kind in the classroom. A real gentleman off the ice, but a switch turned on when he got on the rink.”

As a junior in 1988, Schafhauser’s Hill-Murray team made it to the state finals but lost to Edina.  That might have made this year’s state title even sweeter for Schafhauser, because those two teams again played in the finals. This time, Hill-Murray won.

Yes, it was very sweet, Schafhauser said, but not in a revenge way. “It was so satisfying because we beat the best teams: Edina, and the night before, Roseau. We were the best in the state for those three days, and the fact that Edina was one of the very best, made it that much better,” he said.

He returned to the United States and underwent physical therapy in Colorado and then coached a high school team in Sioux Falls, S.D., to that state’s championship.

That’s when Lechner called. Lechner had been a teacher and assistant hockey coach at Hill-Murray during Schafhauser’s high school years but had returned to the school as head hockey coach. He needed a junior varsity coach. Was Schafhauser interested? For sure.

Lechner said: “I needed a coach, and I thought it might be good for him. I thought he might want to jump right back into the rink, even though it had put him in a chair.”

“I was more than happy to come back to Hill-Murray. That’s where my heart was,” Schafhauser said.

After one year with the JV, Schafhauser was moved up to the varsity as an assistant, and the team has had consistent success for the past decade, making it to the state tournament in six of the past 10 years.

His personal life has reached some high points, too, in recent years. He was married at the time he suffered the hockey injury, but the trauma and stress of the recovery ended that marriage. In 2002, he married again, and he and wife Angie have twin daughters, Anna and Grace, who are nearly 4.

The girls don’t skate yet — “We’ll wait and see what they want to do” — but having kids that age “sure puts everything in perspective,” he said.

The family is vacationing in Arizona this week; then there’s some time off before summer hockey camp starts at Hill-Murray. So, he’s already thinking ahead to next year’s team.