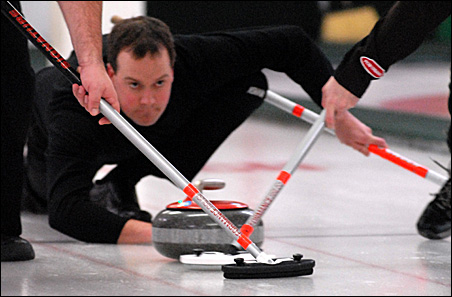 Years of throwing the rock and sweeping with gusto have paid off for Twin Cities attorney Rich Ruohonen, who is heading to the World Men’s Curling Championship next month in Grand Forks, N.D.

Ruohonen, 36, trains at the St. Paul Curling Club on Selby Avenue, and curls for the team that won the national championships last month in Hibbing. His team is skippered by Craig Brown of Madison, Wis., with other members Pete Annis of Owatonna and John Dunlop of Milwaukee.

“For years I’ve been telling my colleagues at work that we were getting close, that we were going to win one of these times. I think they’re surprised it finally happened,” said Ruohonen, of the Pritzker Ruohonen & Associates law firm in downtown Minneapolis.

In Grand Forks, they’ll compete against teams from Europe and Canada. U.S. curling reached a high point in 2006, when the Olympic men’s team won its first-ever medal, a bronze, in Torino, Italy. (Many members of the 2006 men’s and women’s curling teams have Minnesota connections.)

First, world championship; then, maybe the Olympics
Ruohonen has been on teams that placed fifth in the nationals before and is savoring the victory, while still preparing for the world competition. He even allows himself to look a little further ahead: If his team wins the nationals next year, it will represent the United States in the 2010 Winter Olympics in Vancouver.

But for now, the focus is on Grand Forks.

To prepare, the team will go to Canada this weekend, both to practice and to watch the Canadian national championships, called the Brier. Curling is big, big, big in Canada, a sport second in popularity only to hockey there, he said.

Ruohonen said he started in the sport at age 11, watching his dad throw the 42-pound rocks. By his teen years, he was on a team. Except for a year off in law school and a year off in his first year as a lawyer, he has been competing ever since. 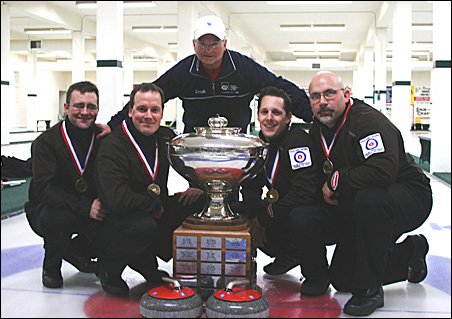 He went to high school at Spring Lake Park and graduated from Hamline University and the Hamline Law School.

In addition to weekend tournaments around the Midwest and in Canada, he plays on a Tuesday night league at the St. Paul Curling Club. Twice a week, he practices there for 45 minutes during lunch.

Someday, he hopes, curling will be family affair
He’s married with two young children and recognizes that the sport takes a major commitment from his family and job. But the kids sometimes join him at the rink, and it won’t be long, he hopes, ’til they’re sweeping alongside dad.

Ruohonen had been skipper of another team, but this year moved to third position when he and longtime teammate Annis joined Brown’s team.

The St. Paul Curling Club is the largest in the nation, with 1,200 members, he said. It runs games from August, through the winter, and into June. With so much demand, there’s talk of keeping the ice open year-round, he said.