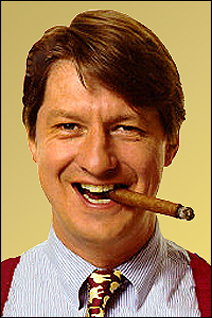 Before he went on the Northrop Auditorium stage Tuesday night, P.J. O’Rourke was explaining to a young woman why he’s a John McCain supporter.

“He’s a stand-up guy, a fighter pilot,” the author, journalist and satirist said. “Have you ever seen a fighter pilot land on an aircraft carrier?  It’s amazing. It takes great bravery. Judgment. Then look at Obama or Hillary. What could they land?”

The young woman nodded, mesmerized by the great O’Rourke.

I couldn’t help myself. I jumped into the conversation.

“Wait a minute,” I said. “Wasn’t President Bush a fighter pilot when he did show up for training?”

Author quick with a retort
O’Rourke didn’t miss a beat.

“He didn’t land on carriers, just the ground,” he said. “Anybody can do that.”

O’Rourke, author of the bestsellers “Parliament of Whores” and “Give War a Chance,” was brought to the Twin Cities by a number of true-believing conservative organizations. Among the supporting groups were Collegians for a Constructive Tomorrow (they believe capitalism is the answer to global warming, if global warming exists), the Taxpayers League of Minnesota (all taxes are evil), KTLK-FM radio (all Democrats are evil), the Tocqueville Center (college profs who believe that anything written by anyone other than an 18th century white males might be evil).

There was a gift — a button saying “I’m a Conservative” — for the first 1,000 people to enter Northrop. There were hundreds of gifts left over.

Mostly, the few hundred people who gathered to hear O’Rourke laughed at his speech, “Yes, I’m Still a Conservative, Damnit,” though sometimes not so comfortably. O’Rourke is a conservative, but he doesn’t take himself or political leaders very seriously. He was as comfortable ripping Republicans as Democrats.

Seven Dwarfs, crazy politicians
Of late, he said, U.S. presidents have looked like the Seven Dwarfs. “Right now we have Dopey, before him we had Sleazy,” he said.

There was laughter. Sort of.

“I’m a strong conservative,” he explained to the audience. “But I’m a Republican with reservations.”

What O’Rourke mostly does these days is go around the country putting a new top on the speech that he reads over and over again. Tuesday night’s new top went like this:

“I’m always excited to come to Minnesota,” he said, explaining that Minnesota voters are obviously “evil geniuses” who like to do strange experiments in the political lab.

“A few years ago, you elected a man to be governor who was clearly insane,” O’Rourke said. “Jesse Ventura was a bold experiment and, with him, you proved a great truth: Crazy politicians aren’t much different than regular politicians.  But you may be going too far with Al Franken.”

During the question-and-answer portion of his program, O’Rourke did pass on the chance for more Minnesota commentary.

A young Republican stood up to ask who McCain would select as his running mate. Presumably, the young man was hoping for commentary on Gov. Tim Pawlenty.  O’Rourke blew off the notion that VPs matter.

“All I can tell you is that the vice presidential candidates will be pale and male,” said O’Rourke. “We learned all we need to know about vice presidents when Richard Nixon picked Spiro Agnew and he still won.”

The audience did love the way he handicapped the presidential race.

“I’m still rooting for Hillary,” he said, “because Hillary can lose. I’m telling you, guys can’t vote for her.  Guys look at her and say, ‘That’s my first wife.’ She’s America’s ex-wife.”

“He shows that it’s officially more important to be cute than white.”

And he scoffed at the Democrats’ pledges to get out of Iraq — somehow.

“The Democrats on Iraq are like the high school sex promise,” he said. “I’ll pull out in time, honest.”

That leaves McCain as the only hope, in O’Rourke’s view.

“Americans could end up with a Democrat as president and they will control the congress,” O’Rourke said. “That scares me. That could end all the partisan bickering. They could all get together and try to do things. Then, we’re screwed.  … Republicans deserve to lose, but do we deserve the Democrats?”

O’Rourke makes his living ridiculing the political system, the passion and the silliness. But away from the podium, he doesn’t work for the funny line.

“When you think what happened in 2000 (Bush’s disputed election), it’s amazing it’s not more acrimonious in this country,” he said. “Gore deserves much of the credit for that. He stepped back, and there was a great national shrug and we moved on. You wouldn’t know it by all the noise in Washington or in the media, but there is a great consensus in this country.”

He made no effort at a punch line.