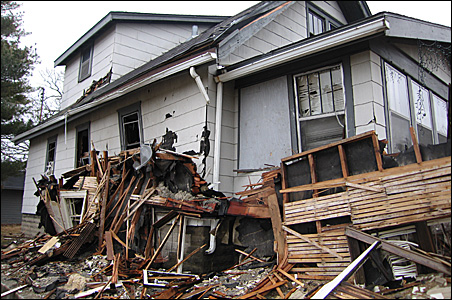 MinnPost photo by Mike Mosedale
The wall from a house at 3206 Colfax Ave. N., which blew up March 26, smashed into the condemned building next door.

Then the stench of natural gas hit him — all coming from a dilapidated brick duplex on a troubled block in Minneapolis’ Hawthorne neighborhood.

Azmoudeh, lead inspector with the city’s Problem Properties Unit, quickly checked out the building at 2518 N. Fourth St. and discovered the source of the noise and smell: a stream of gas spewing from a length of severed copper pipe connected to the meter on the outside of the house.

“There was a whole lot of gas coming out,” recalled Azmoudeh. “It was pretty scary.”

The building didn’t blow up — it could have, like the gas-filled vacant house on Colfax Avenue that exploded a few weeks earlier — because Azmoudeh promptly contacted Center Point Energy and had service cut off. But the incident didn’t surprise him: It’s the third gas leak Azmoudeh’s discovered in six months, all caused by thieves who cut gas lines to steal copper pipes.

“This is just getting really, really bad,” he said with a sigh.

Over the past four years, stripping copper from North Minneapolis homes has gone from an occasional nuisance crime to a virtual epidemic, the result of a skyrocketing foreclosure rate coupled with a surge in worldwide demand for metals to feed a new electrical infrastructure in China and India.

Neither the Minneapolis Police Department nor the city’s Inspections Department maintains comprehensive statistics on the numbers of buildings hit by copper thieves. “We just don’t have the resources to do that,” said Thomas Deegan, the manager of the city’s Problem Properties Unit. But while stripping is occurring throughout the city, Deegan said, the crime is most common on the North side.

By all evidence, it is on the rise. “I would say, conservatively, that 20 percent of the approximately 600 vacant homes on the North Side have been stripped,” Deegan said. “And if you ask the neighborhood groups, you’ll probably get a much higher number.”

Easy money
While aluminum siding, stainless steel sinks and even catalytic converters have become common targets for metal thieves, copper remains the prime quarry. The reason? The price of the metal has risen from 65 cents a pound in 2002 to about $3 a pound today. That translates to easy money for any thief willing to do an hour’s dirty work.

For thieves who ply their wares at the local scrap yards, the value of copper from a typical home runs about $300, said Officer Rich Jackson of the Minneapolis Police Department. But the value of the damage done to the buildings is invariably higher, often much higher. 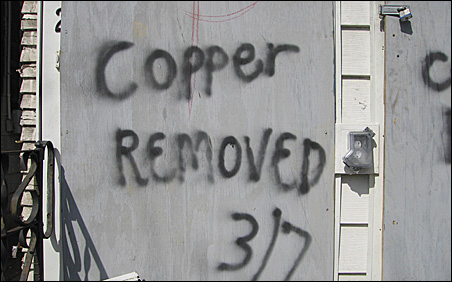 MinnPost photo by Mike Mosedale
Message to scrappers on a house in Northeast Minneapolis.

In worst-case scenarios, such as the explosion at 3206 Colfax Ave. N. on March 26, properties have been rendered virtually worthless.

In the Colfax Avenue incident, a thief severed a copper pipe and caused the house’s basement to fill with gas. No one was injured in that explosion — not that authorities know of, anyway — but the building was destroyed. The force of the blast blew the exterior walls into the two neighboring homes, causing significant damage to both structures.

Now those houses, which were vacant at the time, are candidates for the wrecking ball — all in pursuit of a penny ante score. It’s a galling reality for North Side neighborhoods already struggling with a constellation of social and economic woes.

Usually, the cost of repairing stripped homes runs in the thousands of dollars, said Ron Korsh, a construction manager with the nonprofit Greater Metropolitan Housing Corporation (GMHC). Over the past year, Korsh has inspected more than 100 foreclosed homes on the North Side. He estimates that about a third of those homes were stripped of copper plumbing and gas fixtures.

“It’s a real tragedy and if it keeps up somebody is going to get hurt,” Korsh said. “But we’re still redoing a lot of these houses. It usually costs about two or three thousand for the plumbing replacement. Then you have to add the cost of wall repairs and other damage, so sometimes it’s not worth it.”

Taking into account the myriad other problems common to such distressed properties — poor foundations and roofs, outdated mechanicals and the like — GMHC estimates that as many as a third of foreclosed houses are candidates for demolition.

Fortunate outcome
Most of the stripped houses and buildings are vacant, condemned or in foreclosure. That was the case with the duplex on N. Fourth Street, where inspector Azmoudeh discovered the severed gas line Monday. All things considered, it was a fortunate outcome. After all, Azmoudeh explained, he didn’t have business at the house when he discovered the problem; he merely stumbled across it while making a routine check at the neighboring property, a condemned 12-unit apartment building which had already been hit by copper thieves.

Returning to the scene Tuesday, Azmoudeh searched for signs that the interior of the duplex had been burglarized. “They could have gotten inside and removed all the plumbing, but I can’t go in. I’ll have to contact the owner,” he explained as he snapped a few pictures and jotted notes in his ledger.

Until recently, Minneapolis landlord Randolph Anderson owned both properties. Anderson, who started out in real estate in the early 1980s, invested heavily in the North Side. At his prime, he owned a dozen duplexes and apartment buildings, which he rented under the banner of Urban Choice Apartments LLC.

Ironically, he said his troubles began not with the foreclosure crisis but with the housing boom. By 2005, he said, he had lost most of the “good” tenants at his 12-unit apartment building, some of whom had taken advantage of easy credit to purchase their own homes. Struggling to keep the building filled, Anderson said, he began to rely on a less desirable pool of renters. It wasn’t long before authorities took notice. In 2006, the City Council, citing evidence of gun and drug activity on the premises, revoked Anderson’s rental license.

Anderson is still irked by that decision. “Supposedly, it was a get tough on crime thing. But what really happened was, the city reduced the police force and then just blamed landlords for the actions of tenants,” he said. “Besides, all these young kids who were dealing drugs in the hallway, they weren’t tenants of mine. I would go over and chase them out, day and night. But when I went in the front door, they just ran out the back door. And if someone called 911, that counted against me.”

Within weeks after he lost the license and the building was vacated, Anderson said, the first thieves struck. Initially, they targeted the laundry room and the boiler. When they returned a few weeks later, they ripped the radiators out of the hallway. Unable to get his rental license reinstated, Anderson tried to sell the building. Unsuccessful, he found himself unable to make payments and fell into the red. That, he said, led to the foreclosure of the apartment building and the neighboring duplex.

While police and city officials say such investments-gone-bad remain the most common target for copper thieves, there are exceptions. Sean McKenna, an arson investigator with the Minneapolis Police Department, points to the nightmare story of 3500 N. Fourth St. In December 2006, while homeowner Keili Mac was overseas on an extended vacation, a burglar severed a gas line in the basement, causing the house to fill with gas and explode.

By the time Mac returned to the country, the house had been razed by the city because it was a hazard. To add insult to injury, McKenna said, Mac found herself mired in a contentious struggle with her insurance company, which balked at her claim because it didn’t have the opportunity to evaluate damages before the demolition. McKenna is unaware of the final resolution of the case. Mac could not be reached for comment.

Zev Oman, a Minneapolis landlord who has commercial and residential holdings, said when burglars struck one of his duplexes on the South Side, they didn’t remove the pipes with tools; rather, they ripped them out by hand, causing considerable additional damage. “My plumber said he’d never seen anything like it,” said Oman, who estimates the overall cost of repairs at about $10,000. At the time of the crime, Oman had posted a For Rent sign outside the duplex, a decision he now regrets. “That’s like a death wish, putting a sign out. It’s just an invitation to thieves.”

Thieves watching properties
As he continued his rounds on the North Side, housing inspector Azmoudeh echoed those concerns. “That’s a very good attraction. These people [copper thieves] can tell easily when a house is vacant. So they’ll watch the properties for a while, and once they go in, it doesn’t take them very long,” he said.

In response to the problem, the city recently started a campaign urging neighbors to keep a closer watch on vacant buildings on their blocks. Azmoudeh is not sanguine about the initiative, especially in hard-hit neighborhoods such as Hawthorne.

After inspecting the duplex with the severed gas line on N. Fourth Street, Azmoudeh knocked on the door of the ramshackle home just to the north, one of the few occupied residences left on the street. A middle-aged woman came to the door. Azmoudeh inquired whether she or any family members had observed any activity near the stripped duplex in recent days. The woman, who explained that her rented home is in foreclosure and lacks proper water service, said she didn’t notice anything unusual.

Her daughter popped her head out the door. “Well, I saw a black guy in the garage the other day,” she volunteered, pointing to the door of the garage, which was still ajar.

Did she call the police? No, the girl replied indifferently.

Azmoudeh shook his head. Heading off to inspect another stripped home — a handsome duplex on Morgan Avenue N. — he offered little in the way of solutions.

Property owners, he said, are becoming increasingly desperate. Lately, he’s noticed more people are forgoing the use of copper altogether, instead installing a synthetic tubing material called Pex. Other property owners who still have copper, he said, are painting the copper black in the hope that thieves will mistake it for Pex.

“It’s just very depressing to see what is happening. Sometimes I go home, I just feel drained,” Azmoudeh said. “There is a domino effect up here. Somebody has to stop the process, to stop all these foreclosures.”

MONDAY: Who are the copper thieves?

This is the first project financed by the new MinnPost Watchdog Journalism Fund.

Part Two: Who steals copper? Kwan Manasseh, others like him

Kwan Manasseh is a hard-luck character with a long rap sheet. He’s now in jail for committing a crime that’s on the rise in Minneapolis’ North Side and elsewhere: copper theft. More and more, thieves are preying on vacant houses and buildings, stripping the structures of copper and other valuable metals, often to pay for meth, crack and booze habits. And as the number of these thieves mounts, the criminal-justice system is struggling to deal with them.