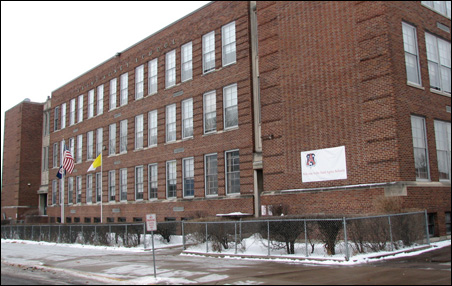 One year ago, St. Agnes School in St. Paul was on the verge of closing for good. Financial pressures had mounted, and students were already looking for new places to attend school that fall.

The Catholic K-12 school — which opened in 1888 as part of a new German-Catholic parish and has become a landmark in St. Paul’s Frogtown neighborhood — seemed doomed.

But a last-ditch rescue attempt, fueled by lots of media coverage and appeals from students, brought in several major donations — $3 million worth — and bought the school time to recover its financial footing.

Landmark school now planning long term
Today, the school is thriving and has a long-term plan to stay in business. “We’re here for the long run,” said the Rev. John Ubel, pastor of St. Agnes Parish and school superintendent.

“Things are going very well; we’re grateful for those who came to the rescue and pleased that others have now increased their support,” Ubel said.

Last year, major donors anonymously gave $1 million and $1.6 million to the cause. One of those gifts, it turns out, came from noted philanthropist John Nasseff and his wife, Helen Houle. Nasseff said recently that he’d never been inside St. Agnes before hearing about the school’s plight last spring. He and Houle were particularly touched by seeing students in tears at the prospect of losing their school.

“Father Ubel showed me his plan to get the school back in the black,” Nasseff said. “That was important to us; we wanted to help get them back on track for the long haul.”

“I don’t want to imply that we’re rolling in money, but we are now looking long-term,” he said.

“We lost some families last year, when it looked like we were closing, but we’ve got 420 students from 200 families now in school, and half of those families have more than one child here. And 24 families have four children enrolled,” Ubel said.

“We realize we can’t rely on the parish to make up all the deficits; we can offer a legitimate subsidy from the parish, but it can’t be overwhelming, like it had been. We’re now paying down our debts and starting to look at our long-term future.

“We haven’t had a single kid ask this year if we’re going to be open next year.”

Donations to the school are up, now that many grasped the importance of supporting the school, he said.

Other changes include new school administrators and a higher level of discipline, Ubel said.

“It wasn’t like it used to be a free-for-all, but our new administration has been well-received, and there have been noticeable improvements in the teaching and learning environment,” he said.

Payroll and benefit expenses were cut by $300,000 to improve the bottom line.

The school also renovated its kitchen, so it can provide hot lunches prepared on site.

“We had cancelled the hot lunch program at Christmas 2006 because our kitchen wasn’t up to code, and we’d essentially just been catering hot lunches from outside. But now a major gift has allowed us to put in new equipment, and we’re running our own lunch program again,” Ubel said. “It’s been very important because we have a number of families who qualify for reduced lunch rates from the state. So this has been another way we can help our families.”